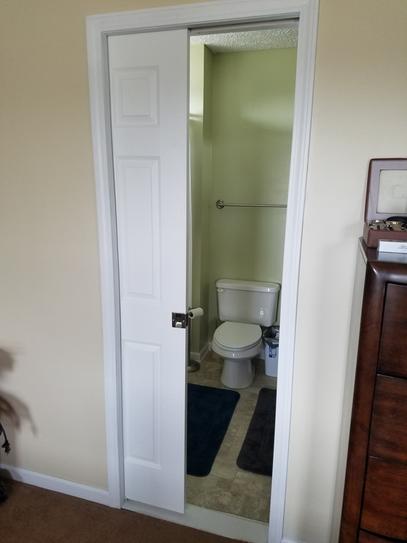 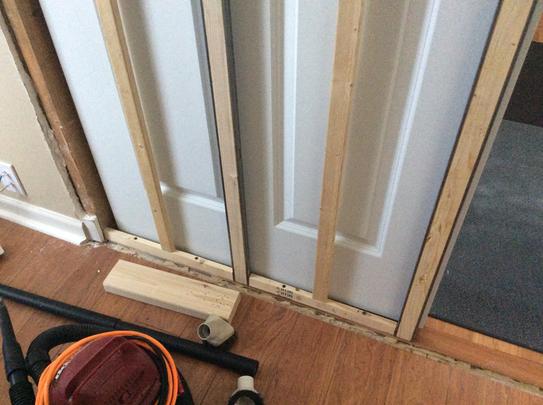 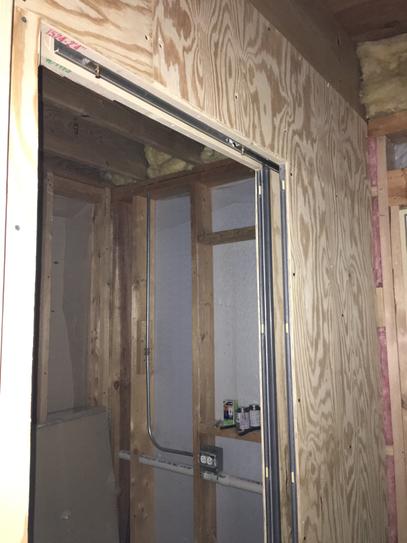 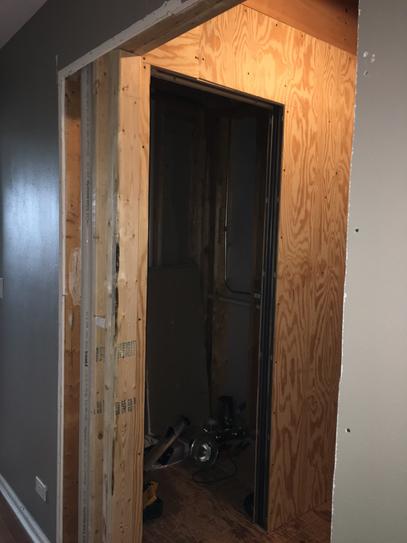 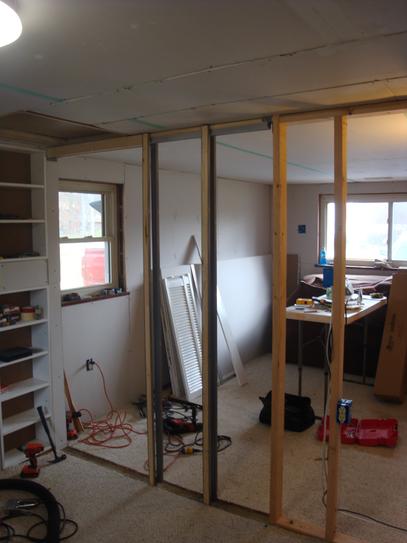 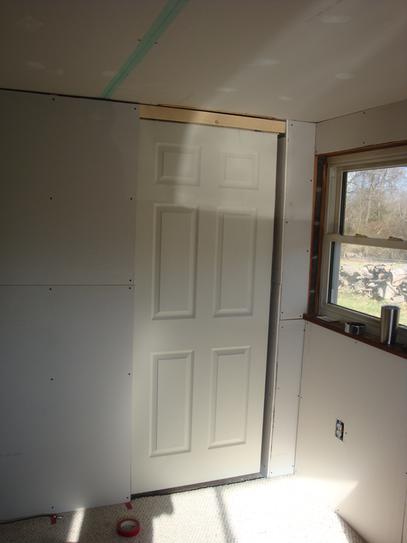 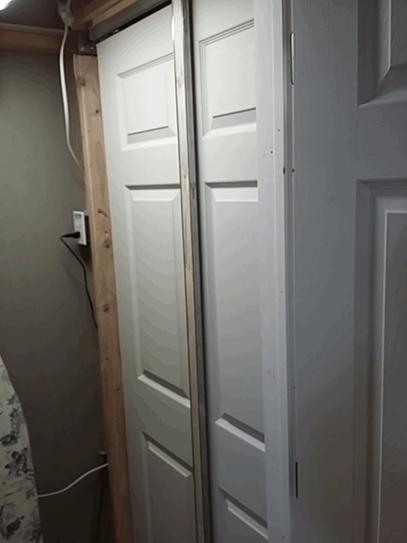 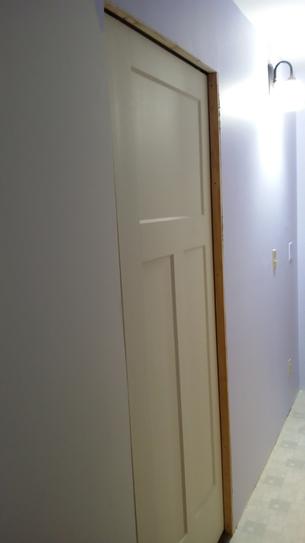 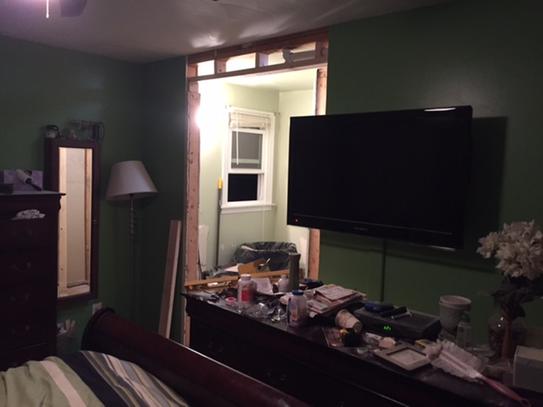 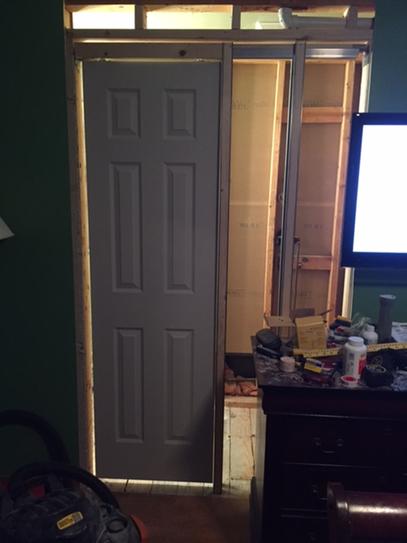 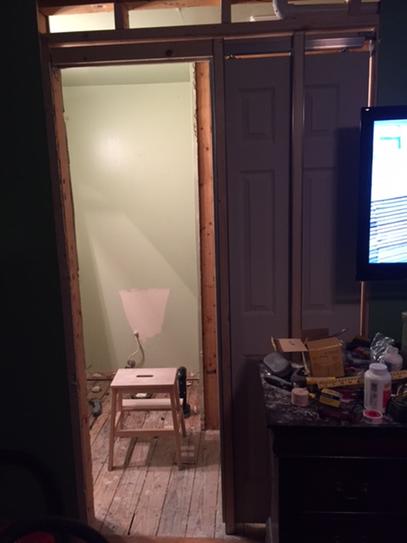 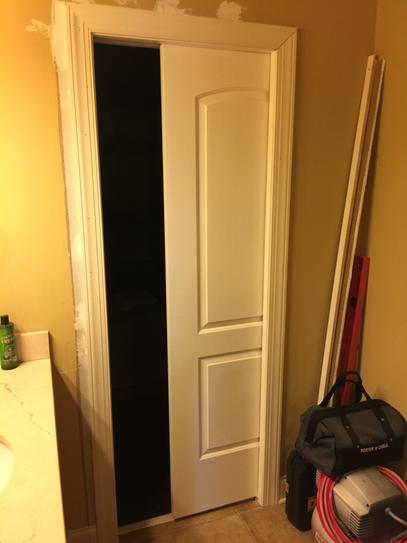 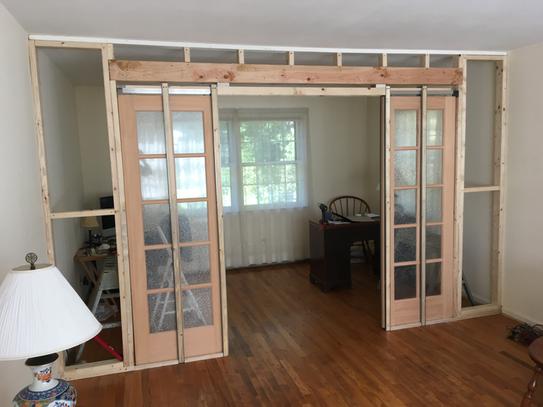 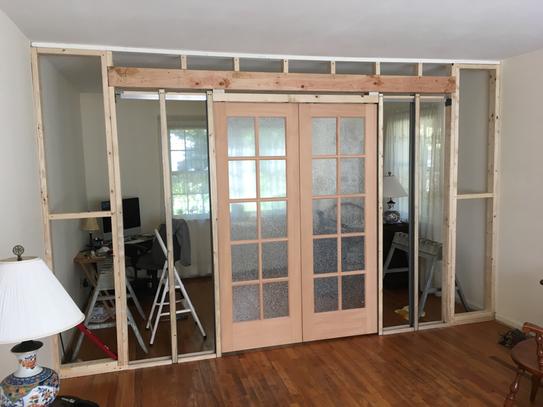 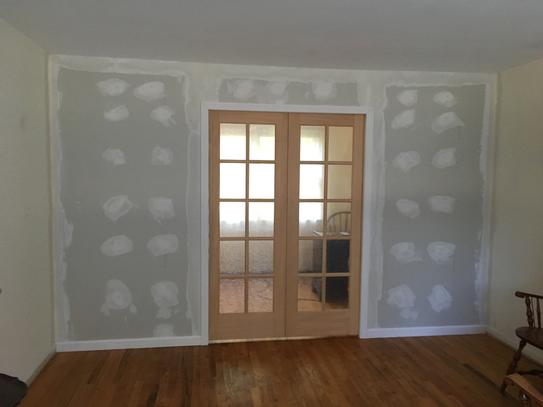 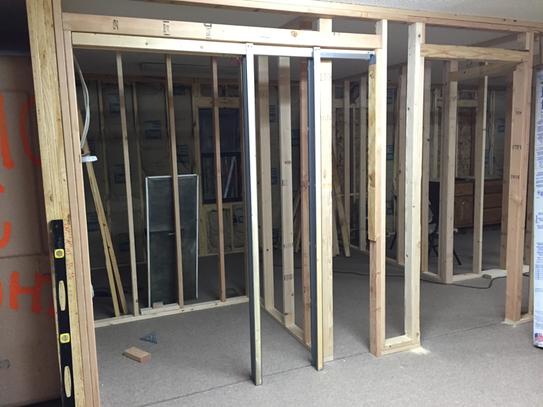 As a contractor I've installed numerous pocket doors. They're all flimsy but work very well if carefully installed. One very important thing that I learned is to use 1" screws for the drywall, in the area of the pocket door. Regular 1 1/4" drywall screws will penetrate the back of the 1x2 nailers provided in the kit, and scratch the door's surface when it slides into the wall. I used to staple a small bag of 1" screws onto the frame, so the drywall crew couldn't attach a sheet there until it was removed, to be certain they used them in their haste.

28 out of 28 people found this helpful
more details...
By: dorrus

On a recent project, we converted our 4th bedroom into an extension of the Master bedroom walk-in closet. We used the Johnson Hardware Pocket Door Frame kit and it worked out great. I installed a 28" pocket door, so I had to trim the header of the kit. I found the directions clear, and the kit already had the marks located showing where the cut needs to be depending on door size. The hardware includes everything, even a small wrench for tweaking the angle of the door hang, to attain perfect alignment (though you really want your new header to be square). The included roller bearings are very nice too. I've included pictures showing day 1 project start, thru completion.

After reading reviews of several pocket door kits I selected the Johnson 1500 Pocket door frame kit. Ordered from Home Depot and got quick FREE delivery to my home. One picture in the instructions could lead you to reverse the header channel during installation but otherwise the directions were very precise. Pocket door replaced inswinging regular door going into washroom. Existing 32" door really took up floor space in the small washroom and was a pain blocking area behind open door. Now it is like a much larger room. Heavy duty ball bearing rollers are slick! Main reason to like this kit beside ease of installation, my wife LOVES it!

Lawrenceville, GA, USA
65 or over, Male
21 out of 21 people found this helpful
more details...
By: engineer

From everything I read, this was the better quality pocket door frame to buy. I have three older pocket doors from the late 50's and obviously this one seems very smooth and quiet since its new. Not sure if the wall supports are any sturdier though. I may even say that the cheaper frame in-store may be stronger as far as wall strength. The directions are decent, but not excellent. You will also have to buy the door-jamb trim kit which is not included although I think the cheaper in-store pocket door kit has the jamb kit included. It took about 10 hours from start to finish, re-route electric/plumbing, tear out wall, frame opening, install pocket door then sheet-rock. Don't forget your level and square, they will make or break this install. If you don't know how to use a level or square, you may want to start practicing.

Assembly and installation was a breeze thanks to the detailed instructions that came with the product. Johnson Hardware's website also has an excellent video to help you. The rollers and track are top quality on this door. Structurally it seems quite adequate although nailing the trim must be done carefully so as to not nail into the metal split studs. I used 6" x 1" trim screws instead of nails in the casing instead of nailing. All-in-all, a very good purchase.

16 out of 16 people found this helpful
more details...
By: spiral

Pros: The sliding track, hardware, and door header are excellent, much better then several others I looked at. Cons: Only 4 2X2's (2 for each side) are provided. While being encased in metal help, they still allow the wall to flex too much. So I added to 2X2s to each side of the wall, plus I added 2X2 nailing surface at floor level for a nailing surface for floor base. See the picture I enclosed. Also, the instructions need more detail. Being a veteran do-it-yourselfer, I was able to figure it out, but I would suggest looking at the installation instructions online and calling their support with any questions before purchasing. Would I purchase again, yes, it worked out find for me.

This product does as it suggests. However, I don't think it's all the DIY. Never has the adage, "measure twice, cut once" been so accurate. I imagine that the second and third installations are infinitely easier. I might even say that after doing it once, I could do without all the prebuilt parts and would prefer to mount the track directly on my own. However, I have one gripe, and it's a major one. The accuracy of the manufacturing of this product is not impressive. For a product that demands such accuracy, they should check their manufacturing facilities. Specifically, on the one I purchased from HD, the end jamb bracket was not centered on the wood header. Rather, it was all the way over to one side (see picture). What that meant was that despite me making sure the header was true and plumb, once the door was on the rail, it rubbed against the split studs. When I adjusted the jamb bracket (fortunately I used screws, not nails, as suggested), it meant that the wood header stuck out from the wall, leaving me the job of sanding down the header, to get the sheet rock to be flat. I suspect others know this, as ALL the boxes at HD were open and I am a betting man that says people know to look for this, as its a major issue. I am also not a fan of the split studs. First, two of the four of mine were bent. Second, the location of the metal frame is annoying, as it doesn't allow for easy connection to the header if it is not exactly an 80" door height. I would think they could do a better job with just four pieces of wood, with caps at either end that lock into a frame that is only in the center, allowing for easy adjustment. Now that I know the issues and tolerances of pocket doors, I would simply purchase the hardware and not the kit. However, I would recommend the kit still, to anyone looking for their first time. Just check the boxes!

13 out of 13 people found this helpful
more details...
By: yetis

I loved product. Quality is great. Generally easy to install. However the instructions do not make it clear which side of the track is the door opening and which side is the pocket. For this reason I installed it backwards and had to remove and reinstall track. Removing it took much more time than actual total install becasue it had been totally nailed in place and I did not want to damage any of the brackets. I even read prior reviews that said the same thing, assured myself I would not make the mistake, and I still made the mistake. Yes, maybe I am just dumb. Manufacturer needs to be clearer in install directions. Product is great.

The ONLY reason I am giving this 4 stars instead of 5 is because one of the wheels that came on one of the rollers included has some ridges on it which cause some added noise when rolling back and forth. I managed to sand it down with some fine sand paper to eliminate most of it. All of the other wheels seem fine. The bearings are smooth. Overall, this door frame feels much more stout and sturdy than the standard pre-built garbage. I would definitely recommend this one over the lower cost models due to the quality of the rollers, track, and materials used. I ordered it from HD.com and it came within a couple of days, very fast. Box was undamaged and everything inside was there. I do recommend watching the video on the Johnson website. It's a lot more thorough than the directions. Overall a quality product. And I would also recommend the locking door handle shown in my photo. It is a Kwikset Model # 335 15 RND PCKT DR LCK Internet # 100044911 Store SO SKU # 586414. Defintely a good lock if that's what you are looking for.

I do not like pocket doors as they fall off track and jam. I looked at this on line and liked what I saw so order it. I have installed it and am extremely happy with the quality and believe that I won't have an issue with the door falling off the track. I like the two way ball bearing rollers and the extruded track.