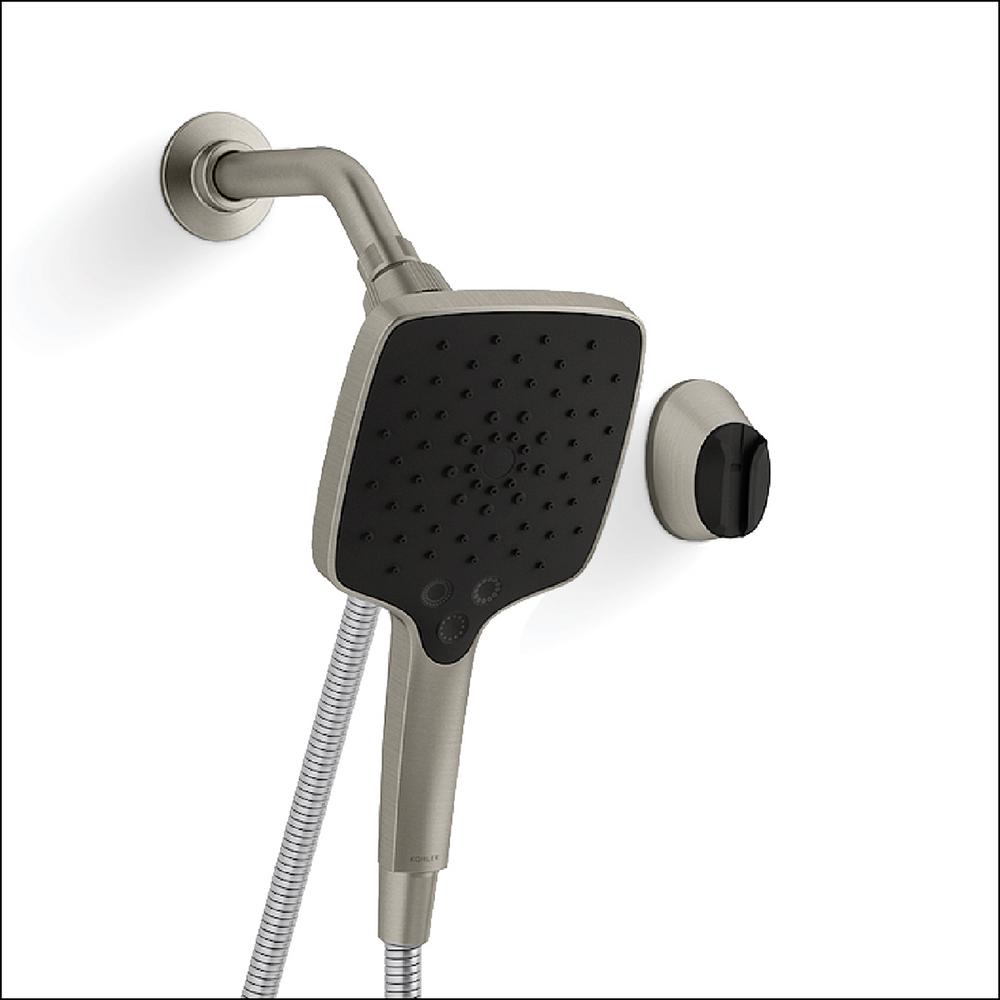 October 28, 2020
Quality :
5
Seeds Program Review
(What's this)
Kohler is a trusted brand and this Rain Duet 3-spray wall mount handheld shower head continues their great line of bath products. The simplicity of the design and installation makes this easy to use. Simply unscrew the old shower head, screw on the new adaptor that servers as a dock as well as a connection to the flexible hose, screw on the flexible hose to the head, and you are ready to go. A nice feature of this unit is quick change of the spray pattern; you simply push on of three buttons on the five-inch rectangular shower head. The unit comes with an additional stick on second mount/dock so you can place it closer to the tub if you are sitting down, a great feature if you are bathing children, a pet, or just soaking in the tub. The flow is rated at 1.75 GPM. The three setting are wide coverage rain shower, gentle mist, and massage. The unit and hose are polished chrome with a black plastic spray head. The 72-inch-long hose moves freely and doesn’t dripping. The three flow patterns switch instantly with the push of a button – making this a very convenient unit to use. Overall, it looks classy, feels great, and works flawlessly. Unit has a lifetime limited warranty.
Pros: Easy to Install, Easy to Use, Good Size & Weight, High Quality, Looks Great, Nice Design
Was this helpful?
0
0
RobDIY
Kansas City, MO

Distinct design, good quality, adequate choice of spray patterns, but some potential issues. Th...
October 26, 2020
Quality :
4
Seeds Program Review
(What's this)
Distinct design, good quality, adequate choice of spray patterns, but some potential issues. There’s a lot to like. The brushed nickel finish is attractive and feels well made. The black matte face on the sprayer looks sleek and modern. Overall, it has a minimalist look, perfect if you’re wanting a clean, uncluttered shower space. While there are only three spray patterns, they actually provide a reasonable range of choice (sometimes less is more), and are easy to select, though the buttons do require a firm press. The handheld can be installed directly on the shower arm as the only shower head, or off to the side on the auxiliary “dock” as an addition to your existing shower head, though this will require a diverter (not included). The hose is very flexible, and at 72” should be long enough for most applications. Probably the biggest concern is the angle of the shower head. It faces “out” more than “down” due to the shape of the handheld and how it clips into the mounting bracket on the shower arm (see pics). This angle might result in water being directed straight at you instead of down and over you. This won’t be an issue if you intend to use it as a supplemental handheld and rely on your regular shower head otherwise. The remote dock offers two installation options: drill screw anchors into your tile or apply the “very high bond” adhesive backing to your tile. If you opt for the adhesive method, position it carefully! You get ONE try, and it cannot be repositioned! A suction attachment option would have been nice (especially at this price point), and would have allowed easy removal and repositioning (making it possible to take it with you if you move.) Installation was easy enough though the instructions were slightly confusing and not up to the standards I’ve come to expect from Kohler. But if you’ve ever installed something similar you’ll figure it out. I encountered one odd problem that I suspect was a packing or manufacturing mistake - there was an extra piece of rubber on top of the washer that prevented water from flowing!! I don’t think it was meant to be there. It was easily removed and discarded, after which it worked great. Kohler Rain Duet 3-Spray 1.75 GPM 5.125 in. Wall Mount Handheld Shower Head with Hose in Vibrant Brushed Nickel Model # K-R24163-G-BN
Pros: Easy to Install, Easy to Use, Good Size & Weight, Looks Great, Stylish
Was this helpful?
0
0
Roadrunner
Albany, Oregon

I've installed many Kohler products over the years and have always been pleased with their design...
October 24, 2020
Quality :
4
Seeds Program Review
(What's this)
I've installed many Kohler products over the years and have always been pleased with their design and overall build quality. Having said that, this Rain Duet 3-Spray Wall Mount Handheld Shower Head isn't one of their best efforts. The look is nice although many parts are plastic, typical of fixtures in this price range. Time and use will tell if this will lead to lower durability. Installation was quick and easy using the included instructions. The three spray settings are very nice and, at least in our application, have more than adequate water pressure and flow. The additional mount is a nice feature if you are bathing pets or small children, or just taking a bath but want the spray head within easy reach. On the negative side, the spray head sits at an awkward angle when placed in the mount making it difficult to angle downward enough for a smaller person. This gets even worse if you have a shower caddy in place. Also, a small rubber trim piece in the spray head face refuses to stay in place. I've had to use a bit of shoe goo to keep it from popping out and getting lost down the drain. Overall, I'm happy with the product and would recommend it for most applications.
Pros: Easy to Install, Easy to Use
Was this helpful?
2
0
cl6809
atlanta, ga