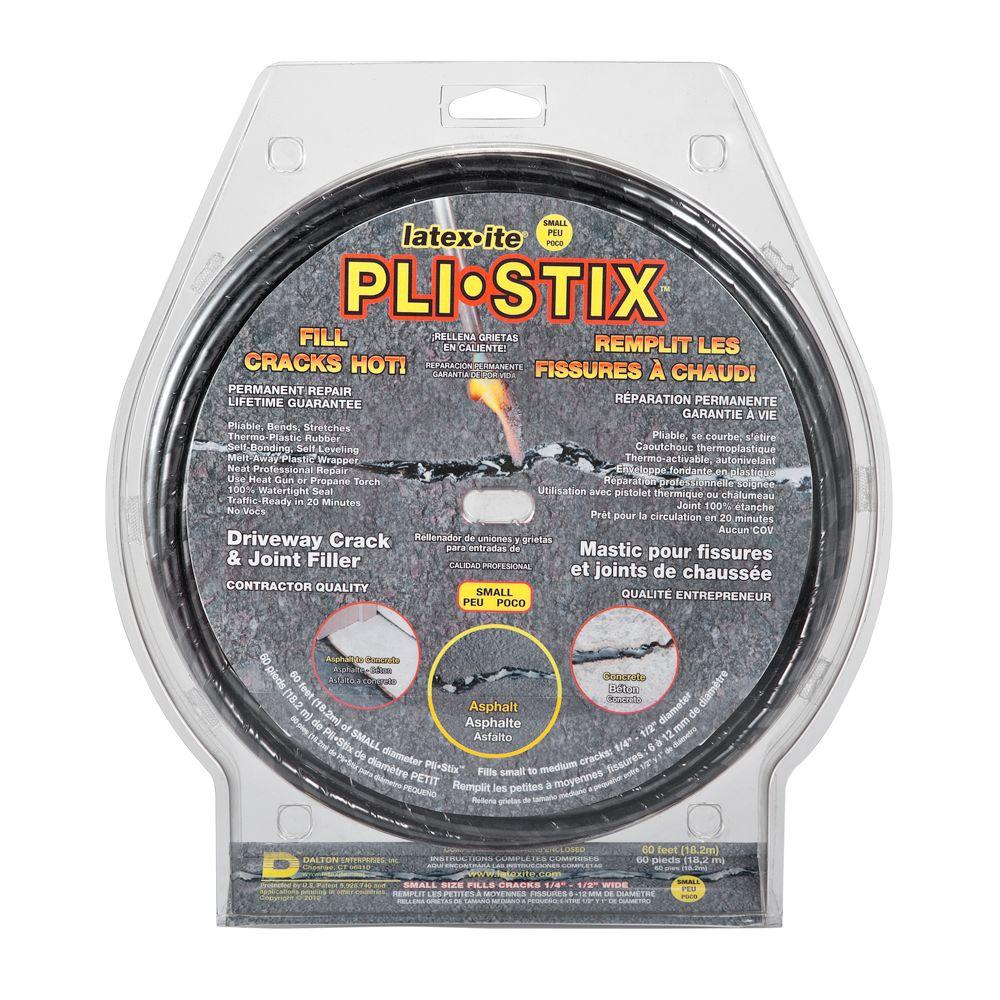 This is the best crack filler I have used on my driveway compared to the past 'shallow patch' and...
June 7, 2019
Quality :
5
Value :
5
This is the best crack filler I have used on my driveway compared to the past 'shallow patch' and liquid ones I have used. So far, so good on the filler holding. This crack filler is essentially a hard tar that you melt into the cracks. With that, you need a torch. I used a MAP gas torch and it worked great as a lot of heat is needed to melt this stuff. Propane would have taken longer. This product is supposed to be jammed in the crack and melted. Most of my cracks were larger than a 1/4" or 1/2" so I just laid the stick on top of the crack and melted it into the crack. I melted it into 90 feet of cracks before my torch ran out of fuel. You will get about 100 feet of stix melted on one standard MAP canister. It cools hard and when in the hot sun it is a little loose but not enough that an imprint can be left in it. Rain washes off most burn marks eventually and sealer can be applied over this. Some tips from my experience: -Power-wash and clear the cracks beforehand. -Fill the deep cracks with sand, up to about 1/8" from the top. Otherwise you will end up melting a lot of these stix into them. -Use MAP gas -Leave the stix in the sun so they become loose and easier to work with -You can heat the stix a little to help form them along the crack -If you are careful enough, you can heat the stix and drag them along smaller cracks to fill them -Work the torch back and forth, dont overheat one area -If you overheat the tar, it will bubble out of the crack -As you heat the stix, you are also heating the driveway so turn the torch off when you get really close to a full melt and let the driveway melt the rest -Use a heat-shield on driveway edges to prevent grass fires -The force of the torch can be used to push the tar into other cracks or along the same. -Use torch to fan any out across asphalt so you dont get lumps -Position yourself upwind of the stix so you don't inhale the fumes.
Was this helpful?
7
0
Mickey
This product is the best I have used for filling asphalt driveway cracks. I've tried other produc...
May 28, 2019
This product is the best I have used for filling asphalt driveway cracks. I've tried other products over the years, but nothing is as permanent as Pli-stix. Follow the directions exactly. I've put down about 150 yards on a driveway of a rental property
Was this helpful?
0
0
RahulK
Get Into The Groove The ease of use, especially for a totally inept hazmat like me, leading to a ...
September 23, 2017
Get Into The Groove The ease of use, especially for a totally inept hazmat like me, leading to a permanent fix, instead of just a filler or a cold tampon, yes you read that right, hyphenazi, type messy material, was spellbounding. Paired with the CSX 900 Cane Torch ( also from Latexite ), made the project so much fun that I had to fight off friends and family and neighbors who wanted to have a go! http://www.homedepot.com/p/Latex-ite-7-in-x-32-in-CSX-900-Cane-Torch-2070/202339332 I am not kidding when it turned out that I did not have enough damage to use up one of these 60 footers completely. But depends upon who you ask, that's probably plenty of damage. The best part was, that in a couple of the longer cracks, once melted, the level went down a notch, indicating that more material was needed - and - the first application, once it had sunk down into the groove, actually provided a nice rut into with the second round just popped in like magic. The beauty of the hot melt concept is the self leveling of its molten form as it fuses with the existing driveway material, or what's left of it. Who needs hot melt asphalt pouring when you can actually recycle your original driveway fragments, in place. Can't get any greener than that, huh? Disclaimer: I had contacted Latexite with pictures of my driveway and they cautioned me about my condition being beyond what their products are designed for. But they were very helpful and supportive when I explained that my budget being tight, I was willing to put in all the labor necessary, and my level of ineptitude would make the results indistinguishable from planned disaster. The asphalt smell does stick in your nostrils overnight and you keep wondering if you tracked the material in, but no one else at home noticed anything. Especially the Minecrafter. Note, the images I've added were taken after my first shot at this. I'd never handled a propane torch either, but that's another story. Subsequently, I did a tiny bit of touch up - the best part, I cannot stress enough, is that there is no guesswork, there will be holes which scream "Feed Me!" at you. One more thing, I later found out that I could have stripped off the plastic wrapping, which marvelously burns off when the heat gets going. That would have made the crack insertion easier. But, I discovered that even if I did not get the Pli-Stix into the groove, it is possible to have another level of fun with the propane torch, "working" the melting tube in, which kind of starts curling like a Pharaoh's Serpent. And it is absolutely easy to get the hang of coaxing the melting Pli-Stix into where it needs to go, and once it gets there, it magically yanks in the rest of its body. Don't ask. "I love the smell of Pli-Stix in the morning" ~Kilgore
Was this helpful?
0
0
Kevin
New York

Pli·Stix:Easy to use and works as described.
October 4, 2016
The product fills small to medium size cracks in an asphalt driveway easily. You can use scissors to trim its length and thickness as needed. A little gasoline or petroleum based solvent will clean any asphalt residue from the surface of the scissors. It works best if the product can be forced into the crack before heating it. If placed on the surface of a crack, as it is heated it will deform and may move from the spot where you put it. If you try to push it back with any object, it will stick to that object. Also if placed on top of the crack, it may flow a bit beyond the crack onto other areas of asphalt. This will not work on sloping areas of asphalt for the same reason. The directions assume you will push the crack filler into the crack as this is the best method for producing good results.
Pros: Easy to Use, Easy to Work With, Economical, Performs Well, Seals Well
Was this helpful?
8
0
Response from THD-CSNovember 21, 2016
Dear Valued Home Depot Customer, "Thank you for taking the time to share your positive experience after applying one of our Latexite products. Dalton Enterprises, Inc. is committed to manufacturing a quality product and strive for 100% customer satisfaction.”
Sean
CT

Sealed the cracks to stop the frost making them expand
September 27, 2016
Quality :
5
Value :
5
I have been maintaining this driveway for 25 years, need to reseal every 3-4 years. This product seals the cracks well, see puddle in photo. If you attach your propane torch to a ten inch long 2x4, you can keep the touch aligned to the crack and move quickly down a crack with a little practice. I use a knee pads home depot bucket/seat (hold the tools) to support my chest as I work the cracks. I do not seal the drive, just maintain the cracks, which every drive will have in several years.
Pros: Easy to Work With, Economical
Was this helpful?
1
0
Response from THD-CSNovember 21, 2016
Dear Valued Home Depot Customer, "Thank you for taking the time to share your positive experience after applying one of our Latexite products. Dalton Enterprises, Inc. is committed to manufacturing a quality product and strive for 100% customer satisfaction.”
CoastalClass