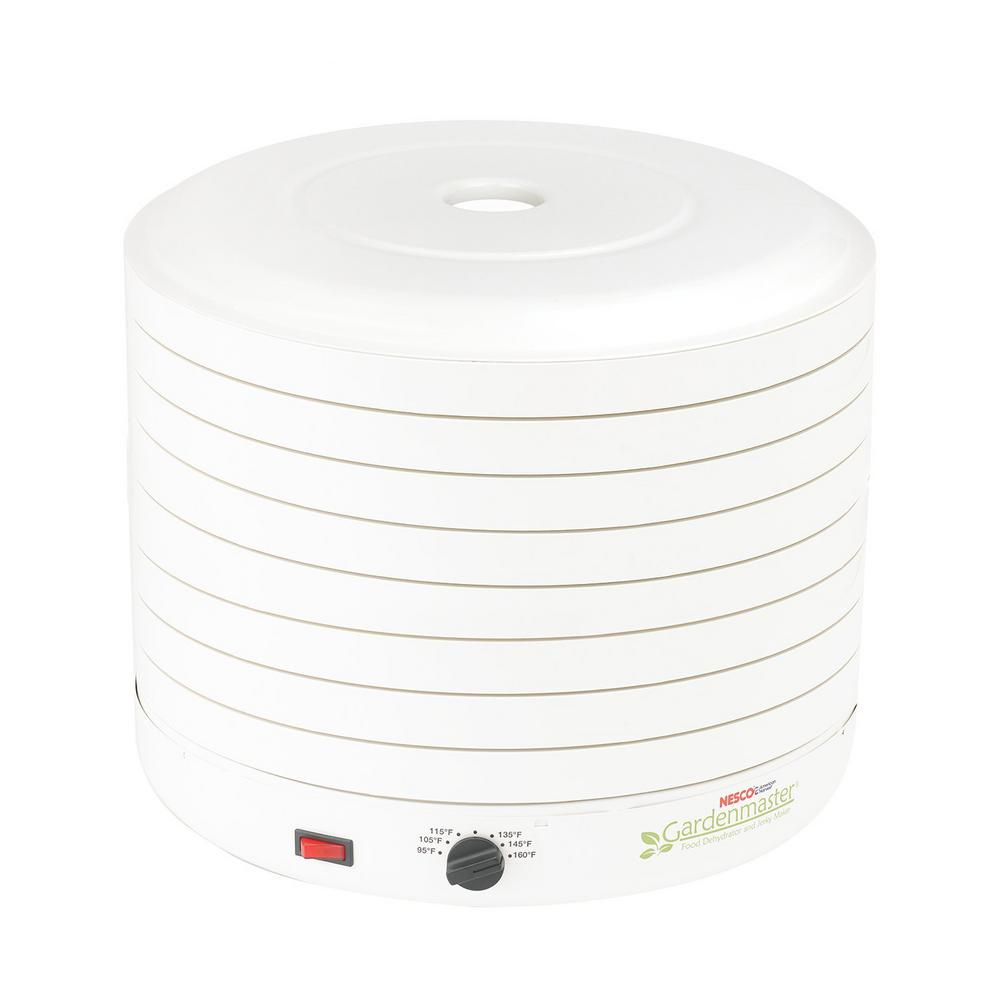 (10)
Attribute Ratings
Quality
3.7
Value
3.7
Sort By:
JustAnotherPerson
Trays do not rest properly against the base, poor quality overall
September 14, 2020
As others have pointed out with their dehydrators, ours had problems right out of the box. The most worrisome problem is that trays do not fit snugly against the base, but instead float above it in a way that creates an air gap. That gap essentially makes the dehydrator useless, as much (perhaps even most) of the forced air goes out that gap instead of up the sides and over the drying food. Secondly, the plastic trays themselves are of poor quality. The trays are made similarly to bike wheels, with plastic spokes that radiates from the central circle. On all of our trays, these spokes were not cleanly stamp out, and there remain areas of “webbing” between the spokes, like the webbing between a duck’s toes. Besides being a poor quality product, this actually will affect the functionality, as that added plastic stops proper air flow. Very disappointed with Nesco on this one. I’ve owned a Nesco dehydrator in the past and it was great. It looks like quality has gone way down hill, but they are still pricing them at a premium. $150 for improperly molded plastic, a fan, and a heating element? Seriously? At least have excellent quality control if you’re going to sell a product for that much. Very disappointed. Going to look at other brands in the future. There seem to be lots popping up now that are better quality materials.
Was this helpful?
4
0
LateBloomer137
I really wanted to like this appliance. It comes with all the extra tray liners, and a booklet o...
September 9, 2020
I really wanted to like this appliance. It comes with all the extra tray liners, and a booklet on how to prepare various dried foods. I was really looking forward to processing food from my garden. However, right after unpacking the appliance I could see that there is a serious defect in the design. The trays do not fit at all as shown in the illustration above, neatly and snugly stacked on top of the base. Instead, when you put the trays on top of the base, a huge gap appears between the base that contains the fan and heat element and controls and first tray. The other trays above that fit together fine. It's obvious what is wrong. There is a convex area in the base of the machine and it sticks up and colides with the underside of the trays, which are flat. There is no reasonable way to solve this problem. In previous models, according to the schematic drawing which is still shown in the video that accompanies this device, one tray used to be designed specifically to be the bottom tray. It is a completely different shape and has a concave area that exactly matches the base protrusion. This problem is showing up In reviews on all the different company sites where this item is sold. Everyone is complaining about the same issue. Big gap between the base and the trays. Between 1/2 to one inch of space. And the traysalso rock back and forth. So you call up the manufactuer. You assume they just forgot to send that bottom tray. The tray that should be there (and was in previous models). And astoundingly, Customer service tells you that they know longer provide a base tray. THis is the "new redesigned model" and it works just fine. So you tell them again about the gap. Obviously the air needs to go up through the trays for it to work not flow out at the bottom of the appliance. Depending on who you get on the phone, they will EITHER tell you that: "all you need to do is turn on the heat full blast at the highest possible heat for one hour to "relax" all the plastic trays and then they will fit. (So basically melt them. Even though they also say watch out for high heat when using the device, don't put them in dishwasher etc. And some reviewers have posted pictures of melted trays.) OR they will tell you that the gap between the base and trays doesn't matter and that the applaince runs just fine with the air gap and trays rocking back and forth isn't a problem. They refuse to admit that there should be a specific bottom tray. And They do not offer a reasonable solution. Telling me to basicly melt the trays so that they fit or use the appliance with a huge gap that lets air out with trays that rock back and forth is just not acceptable. This was not a cheap item. Since they sell replacement parts for other models. I asked if I could buy a bottom tray from the earlier model. Nope. They are only making these trays now, so anyone who wants Nesco replacement trays for any model gets these trays. And there are lots of complaints about that also. And - tray melting is a problem mentioned by many reviewers, so these plastic trays are not that stable, despite what the customer service department says. Although.... On another site - a customer got yet a third response from Nesco: Q. There is a gap between the bottom base and the bottom food tray on one side. Is it suppose to be this way? A. No, that does not sound normal. When the trays are sitting on the base, it should be flush and even. It sounds like a tray is warped or otherwise not sitting right. Call us so we can get you dehydrating.
Was this helpful?
6
0
Klcross