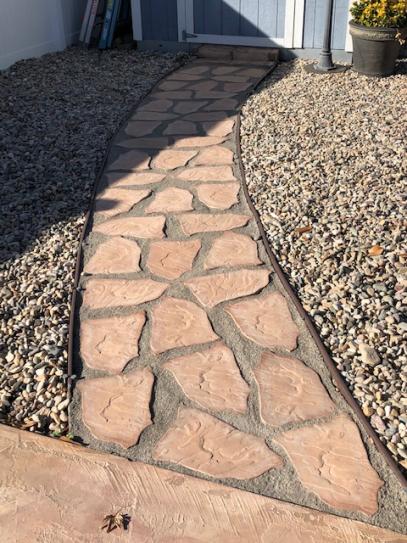 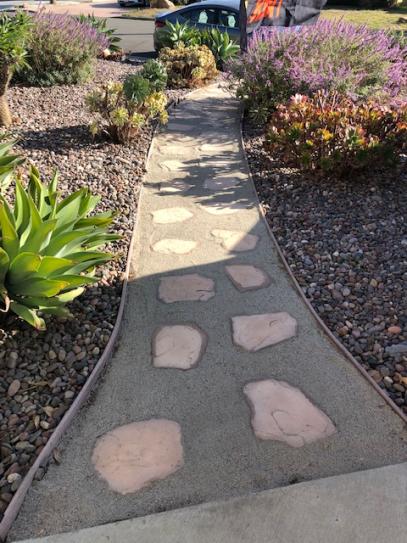 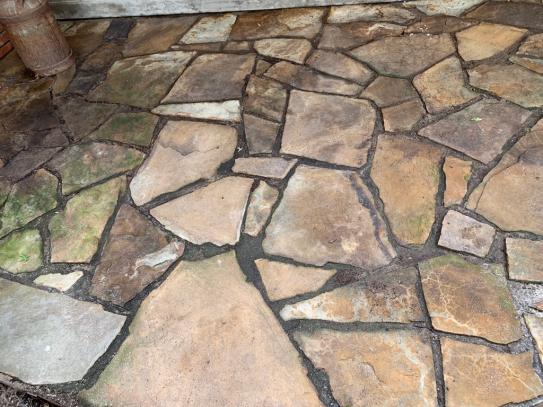 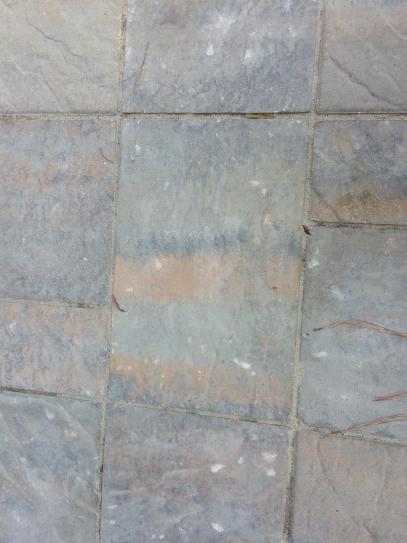 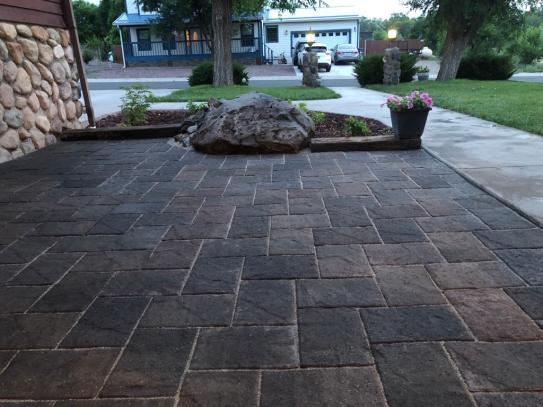 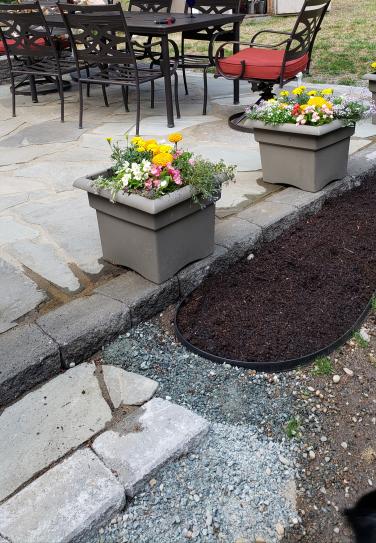 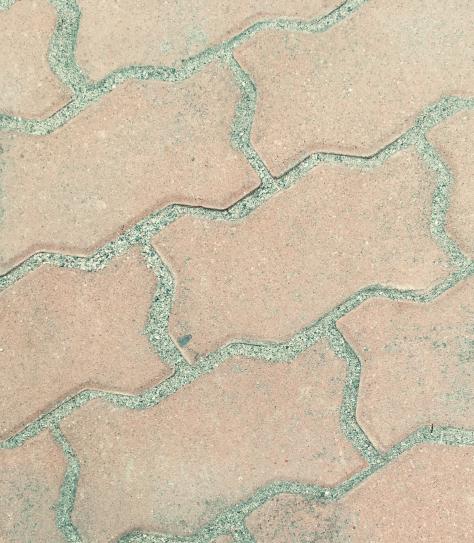 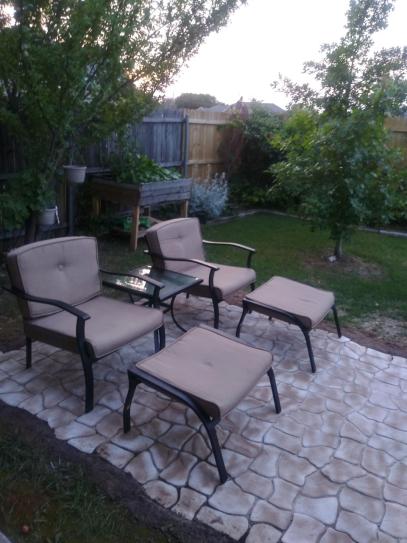 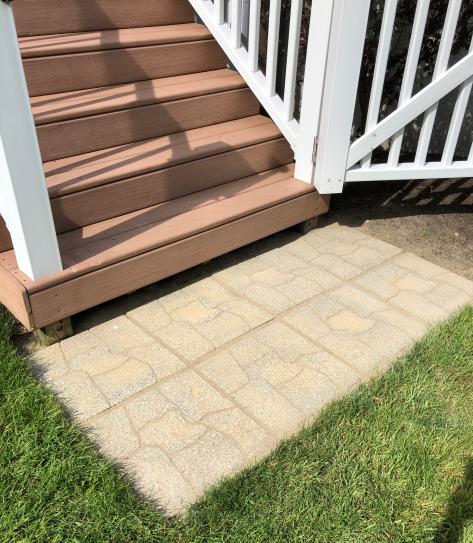 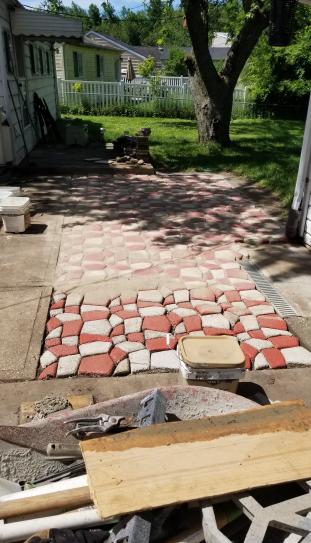 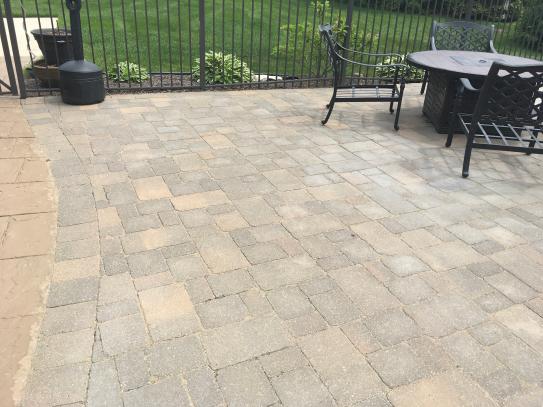 I firsted used this two years ago when we extended my flag stone patio using paviers all around the edge of the flag stone patio. Pavers went down well and then we used the Permasand to make sure that did not move. They look as good now as they did two years ago. Now the concrete around the original flag stone patio looked awful so that was the project for this spring. Any loose piece of concrete was removed with a 5 in one tool and waited until yesterday when it was warm to put the sand in between each flag stone. The was not the fun part but it did take more than 1 1/2 to drop the sand in but you have to make sure that doesn't get on the pavers/flagstone so that is the tedious part. We used a paint brush to sweep it in between. It took about 10 and we used a spay nozzle on light and sprayed down the entire patio. This morning when I got up the sand was hard enough for me to sweep down the patio and replace all the furniture. While it is not totally cured you can walk on because it is hard enough. I really don't get the negative reviews cause it is easy to do and hardens relatively quickly and looks great! Highly recommend!

Connecticut
55 to 64, Female
7 out of 7 people found this helpful
more details...
By: Gumdrops

No matter how careful you are, you will still get white spots on your pavers. I should not have bought this Sakrete Polymeric sand. I've done a lot of pavers but never used this brand of Polylmeric Sand. I had a small area to do and thought this would be more cost effective. I had read the reviews about getting white spots on the pavers so I was extra careful. I poured the sand into the cracks using a cup (to minimize any on top of the pavers) and left at least a 1/4 inch to the top of the pavers. I swept the area 2-3 times making sure there was no sand on top of the pavers. I then used a tank sprayer filled with water to wet down the sand in the cracks. I also washed the edges of the pavers so that any sand particles would wash into the cracks. This was a lot more work than I had ever done with any pavers before. I still got some white spots on the pavers. I wet down each spot and used a brush and was able to reduce how noticeable the spots were but most were still there.

5 out of 5 people found this helpful
more details...
By: detredwingsfan

I’m not completely sure what has caused the problem that others have experienced, but I had great success with this sand. As one reviewer pointed out, it’s not “sand” per se, but a mixture that looks like sand and hardens like cement when cured. We have a 12’ x 4’ granite block walkway that was set straight in the dirt years before we purchased the home. We dug the blocks out, laid a base, and reset them; we had no choice but to leave a fairly large gap in-between the blocks, as that’s how they were laid out originally and there weren’t any spares laying around the yard. Now this is where I had to go a little off the stated directions; first, it says the maximum joint width is 1.5 inches, but we had a few joints that were closer to 2”. Second, forget using a leaf blower to clear off the sand after settling it into the pavers, because no matter how low the speed or how hard you try, you WILL end up blowing the sand out of the joints, so I just went with a small hand broom and brushed from one end of the walkway to the other. The granite blocks are about 4” thick, so that meant having to use multiple buckets of the sand and layering the applications. The first application was a little over 1” depth; I watered it in, let it cure, and then waited a few more days before putting the next layer down, repeated the process and applied the third layer, and the project was complete! What’s even better is that I tried this on some large and smaller cracks in the joints of our flagstone walkway, and it worked out great! The cracks are gone and the overall appearance of the walkway is much improved. Something to note is the instructions say to use a back-and-forth motion when spraying the sand with the hose nozzle’s “shower” setting – assuming you have a multi-function hose nozzle. I tried that initially, but found the setting knocked some of the sand out of the joints, so I used the “cone” setting and found it’s much more effective. The only gripe I have is the inconsistency of color between buckets; the material from one bucket turned a sandstone color after being wet and cured, but another bucket was clearly more gray in color beforehand and dried a lighter shade (think North Carolina beach sand vs. Florida Gulf Coast beach sand, and you’ll understand what I mean). Luckily the lighter stuff was the top layer, so the end result didn’t affect the visible color consistency, but it’s something to be aware of if you need more than one bucket of the stuff.

Pros Easy to Install, Multi Use

Very satisfied with this product - pending long term durability, of course. We covered a 2,000 sq ft circular driveway with 4 tubs. Slow and meticulous but the results were worth it. Discoloration of the pavers not an issue

4 out of 4 people found this helpful
more details...
By: LGGold

Even though the gaps between my pavers were less than the recommended 1/4" minimum, the sand filled them. Follow the directions; broom the sand into the gaps, tamp the pavers to allow sand to fill the entire depth of the gaps, spread more sand, use a blower to remove residue from the top of pavers. However, when it comes to wetting the sand, I suggest using the "mist" setting versus the prescribed "shower" setting. It takes a little longer, but there is no chance that you will flood the gaps and wash out the sand. After setting overnight, you should be good to go.

First of all, a huge thank you to the Permasand manufacturer for making such a helpful video on the Home Depot product page. This how-to video provides step-by-step directions on how to prep and apply the Permasand between your pavers. There are instructions that you can read on the product, of course, but having a video how-to is very valuable and helpful. The first step is to power wash the sand out of the joints of the pavers. Next you need to clean the pavers by power washing and applying a cleaning solution to clean off all of the dirt and residue. After washing the pavers, LET THEM DRY THOROUGHLY. This is so important! The Permasand activates when it gets wet (similar to Quickcrete), so you don't want to spread the sand on a wet surface. After the pavers are dry, spread the Permasand over the pavers focusing on the joints. Make sure the sand fills the gaps to the top. After applying the sand, take a broom and sweep any sand on the surface of the pavers into the cracks. A great tip that they give in the video is to then use a leaf blower on a low setting to blow any remaining sand off of the surface of the pavers (be careful not to blow the sand out of the cracks). And the final step is to wet the pavers with a hose. It is best to use a hose nozzle with a gentle shower setting. Slowly make passes with water over the Permasand in the joints. After each pass, check if the sand is wet at the top. If it is still dry, make another pass with the water. You don't want it too dry (it won't set) and you don't want it too wet (it will become diluted and not set well). So more frequent passes with a little water works best instead of drenching the joints from the start. After you get the right moisture applied to the Permasand, let it dry and cure. Then you're done! It's a lot of steps, but so important to take time to do it right to ensure you get the most out of the product. We applied this to an area on our pavers where we have a lot of weeds grow int he cracks, so we will have to see if this keeps the weeds away.

4 out of 4 people found this helpful
more details...
By: ObjectiveReviewer

I've used this product for a small paver patio in Maine and to stabilize a small brick patio in Arizona. Surviving the heat and monsoons of the southwest and the very different summer in the northeast. Easy to apply and set. No maintenance so far.

4 out of 4 people found this helpful
more details...
By: PBW

This product left a white stain on top of the pavers and now a month after installation is washing out of the paver joints it filled. WHITE STAIN: I followed the directions and was careful to remove the product from the paver surface prior to wetting but found it was impossible to remove the dust. The dust produced the white stain. It is not possible to lay the product into thin joints without getting some dust on the adjacent surface. The porous paver surface captures the dust and it will not come out with a leaf blower or broom. WASHOUT: my sidewalk has a overhanging roof designed to drip on the sidewalk. The product is rapidly dissolving under the dripline At $21 dollars a pail x 3 for about 30 feet of sidewalk I'm feeling dissatisfied.

4 out of 4 people found this helpful
more details...
By: Tom

I first hand scraped the moss and grass out of my paver walkway 3ft x 25ft i then used a shop vac to make sure the cracks we clean. Using a can to dip out the sand and a 4" paintbrush i filled in the spaces. Using a pump sprayer on mist setting i first sprayed the excess sand off the pavers and let the sand and water run into the cracks. After a few min i wet down the whole walkway. Next morning the sand was hard and looks great. Waiting to see what happens after a western PA winter but so far so good

4 out of 4 people found this helpful
more details...
By: TBone33

Easy to use, keeps weeds from growing in cracks. Our ten year old paver patio looks great every year, with only annual pressure washing and renewing paver sand every other year.