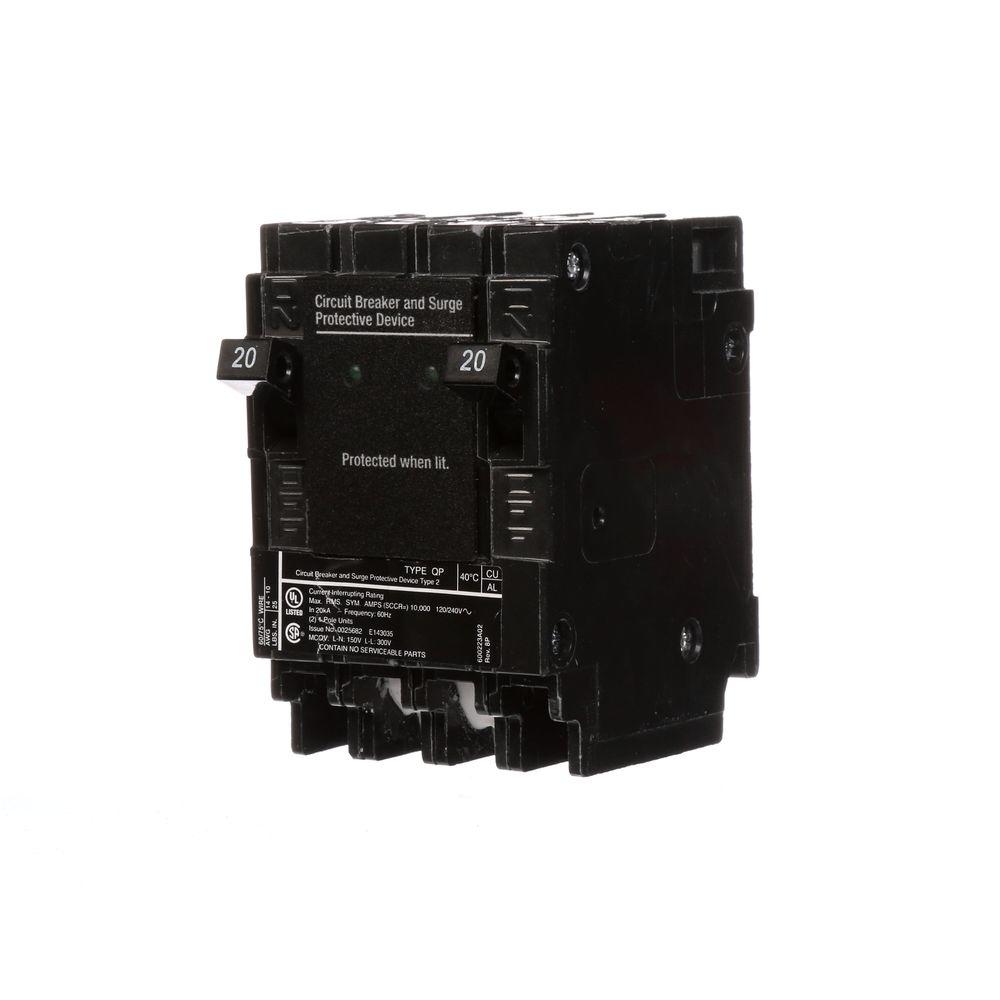 (2)
Sort By:
Savce
Description does not mention this device only fits Siemens and Murray power control boxes, Siemen...
September 2, 2020
Description does not mention this device only fits Siemens and Murray power control boxes, Siemens' CBs works in other brands as do other brands on Siemens boxes, unless mentioned. Maybe a general warning of not mixing CBs in other brands for your DIY customers. If installed in the correct power boxes it is an easy, and safe installation. In other Siemens dual CBs is a statement #"Easy plug in connections in Siemens load centers and meter combos" ?? example https://www.homedepot.com/p/Siemens-30-Amp-Double-Pole-Type-QP-Circuit-Breaker-Q230U/100002289
Was this helpful?
0
0
knuckledragger
The fastest and cleanest way to add whole-house protection if you have a Siemens or Murray load c...
May 8, 2018
The fastest and cleanest way to add whole-house protection if you have a Siemens or Murray load center. Having no wires is a big plus as it improves performance. Be aware that the UL 1449 spec VPRs on this unit are 700V L-N (good) and 900V L-L (great) - neither of these are advertised on product literature but the sticker on the side of the actual product shows this (see my picture). Nominal and peak current is 10kA and 40kA, respectively. Be aware that as of spring 2018 the latest surge protection standard is UL/ANSI 1449 which finally standardizes surge protector ratings. Ignore "joules" ratings - these are often inflated by manipulating the test conditions. If you want performance, focus on three things: VPR (Voltage Protection Rating - the lower the better), SCCR (Short Circuit Current Rating - the higher the better), and the Surge Spike Capacity (the higher the better). Also look carefully at how the surge protector will be installed. For every extra foot of wire between the panel and the device, you lose 175 volts of protection! As short and direct as possible gives more protection. That's why the QSA2020SPDP and the QSA1515SPDP are very good as far as voltage protection. One reviewer mentioned the lack of N-G protection but I would not worry about that unless you're trying to protect a sub panel that's far away from the main panel. Main panels do not need N-G protection. Finally, if you want absolute best performance as of summer 2018, the Siemens First Surge FS60, FS100 and FS140 (available here at Home Depot at very good prices) are the ones to look at (FS100 is the best deal). They have L-N and L-L VPRs of 600 and 900 V, respectively. BUT they are much more involved to install than this product and you'll have to buy another pair of breakers. And if you don't install them very close to your panel, you won't achieve those VPR numbers. Although I do all my own work, I went with this product as the best tradeoff between performance and ease of install.
Was this helpful?
13
0
Response from SIEMENS Product ExpertMay 9, 2018
We may need to hire you to sell our surge protection products! Very thorough review and well written out. We are happy you are satisfied with your purchase as well as taking the time to provide in depth information on the product!

TechGuy
How do you test something that only works in an emergency ? It is a cute trick to combine a surg...
November 1, 2017
How do you test something that only works in an emergency ? It is a cute trick to combine a surge protector and two 20A (they do make a 15A) breakers in one. My small 100A service panel only had one neutral bar. So the location as one of the first breakers from the main breaker (as suggested by many sites) I could not do without moving my dryer breaker. So it's the second set on the panel. Very easy install, just remember to undo the screws before you put it in a they are gorilla tight. This took all of 15 min., but ALL house power has to go off to install any breaker. I have added breakers and wired a complete addition to my house (that passed inspection the first time) so I know what I'm doing. It is not that hard to install, having someone knowledgeable there to assist (and for safety) is a very good thing. It's not the 80s anymore. Every large electrical item anymore has a $300+ control panel. I added this whole house surge protector after replacing my double oven, even my highly discounted unit was $900, my new frig of $2300, recent $1500 for washer and dryer. Each with a control panel this breaker will protect. You can still add a UPS/Surge to computers and TVs. This does not protect again voltage fluctuations, brownouts or blackouts like a UPS can. It will protect against surges from lights flickering (wires were shorted a mile from our house) and line transformer problems in your other products using power this item is protecting.
Was this helpful?
1
0
HandyAndy
My product arrived by UPS an hour ago, and its installed and fuctional already, and that includes...
February 28, 2017
My product arrived by UPS an hour ago, and its installed and fuctional already, and that includes opening the box, and the plastic hardpack case the surge protector was packaged in. I cant comment on functionality, but i will assume it will do what it is suppose to do. I can only comment on installation, which was simple. One cavet- You will need to have some basic understanding of electricity and some basic mechanical common sense. After all you will be accessing the inside of your electrical panel. If that scares you, hire someone or find a friend with the capability. I was a little worried that the size of this unit was going to be larger than the combined size of the 2 breakers it will replace ( and hence be a problem fitting it on the bus, and then replacing the panel. And I would say it is "a tad" larger BUT it did not inhibit installation at all. Being a brand new unit, it took a bit of "gentle force" to get the 2 sets of black side contacts to slip over the power side bus bar, and in fact I had to pull back the 2 single 15 A breakers on its opposite side to seat the new surge / breaker. Then I snapped back in the two 15 breakers. The panel cover fit right back on without any problem. One very nice thing about this is that not only does it add whole house surge protection, it also replaces 2 adjacent breakers. My breaker box was full and I had no room for any additional breakers, but you do not need extra room. I thought i was going to need to buy a few 1/2 wide breakers to replace full width breakers in order to make room for this. I saved a lot of $ not having to do that, AND I now have two, 20 A "back up" breakers if I ever need them (great, where do i put them in a small condo with limited storage for "garage type" items!). Note: breaker boxes are unique to the manufacturer. This unit is for a Siemens box. It will not fit a GE style box, etc. I think it does overlap a few styles but make sure to check before you buy. Otherwise it will be like buying a part for a Ford and try to install it on a Chevy. And its more than just a physical fit issue. It also has to do with how the different manufactures connect the breaker electrically to the panel. Imagine trying to plug in your US style hair drier in an outlet in Germany!
Was this helpful?
1
0
colemapg
The Siemens (Model # QSA2020SPDP) was easy to install and took less than 30 minutes. Two things ...
February 7, 2017
The Siemens (Model # QSA2020SPDP) was easy to install and took less than 30 minutes. Two things that I really like about this device is 1) the circuit breakers will trip when surge protection is lost 2) installing these provides surge protection for the whole house.
Was this helpful?
2
0
Mike
Amissville, VA 20106, USA

Excellent Product--Easy Installation--Good Protection
April 27, 2014
Quality :
5
Value :
5
For once in my life, I "lucked out" and actually possessed the "right" thing in the form of having the "correct" service box in which I could use this particular product. Normally, things seldom go that way. In this case, Siemens has created an easy-to-install INTERNAL Surge Protection Device--which, as most folks know, one cannot simply install just any old circuit breaker type component into just any service box. The manufacturers, generally, have to match--and such was the case for me. Home was built in 1995, and the electrician installed a Siemens 200-amp service box. One day recently, I went browsing on the Internet for a "whole house surge protector" when I stumbled upon this particular device. Sounded exactly like what I was looking for--and seemed easier to install than that of the other types that mount externally. While total power absorption (of this internal device) is less than that of most externally-mounted devices, ease of installation and "value" won out in my decision to choose this particular device. Therefore, I checked the make/model of my box (just to be sure mine was built by the same manufacturer), and lo and behold, it was. Bought this circuit breaker via Internet, and had it a few days later. I had actually never removed a circuit breaker before, but a few searches on the Internet yielded some good "how-to's". Further, I had several adjacent 20-amp breakers to choose from, so I isolated those circuits (and removed the panel cover) and removed the old breakers using what I had learned from the Internet--while also employing (reasonable) safety precautions. I did not secure power to the entire service panel, and even if I had done so, I knew certain bus components would still be energized even if I had secured power to the whole box. I used my Fluke to test areas--both before isolating my two circuits as well as adjacent areas I suspected would remain hot--so I knew where my "boundaries" were. I must say, it was incredibly easy to remove and install circuit breakers once you understand the physical mechanics involved. The Siemens 20-amp Surge Protected Circuit Breaker installed perfectly in the space vacated by the 2 20-amp breakers I removed. I connected my circuit's hot leads to the new breakers, and installed the neutral pigtail (integral to the new protector) to an available termination point on the neutral bus bar (cutting the wire first to keep the length minimal per directions that came with the protector. The directions were simple, adequate, and easy-to-follow, and the device fit perfectly in my service box. Switched on the circuits, and saw the green LEDs illuminate--thereby signifying protection was active. Removing the panel cover, removing the old breakers, installing the new surge protector, and wires, as well as re-installing the panel cover took less than 15 minutes. This was one of the easiest and most effective (I hope) "upgrades" I've ever done. To be honest, I won't really know how effective this device is unless it gets put to the proverbial test, but not having anything in place previously, at least, this gives me some piece of mind that some protection now exists. Thanks for making such an easy to use product.
Pros: Easy to Use, Compact, Clear Instructions, Nice Design, Easy Installation
Was this helpful?
11
0
BJ12897
Plymouth, MI 48170, USA