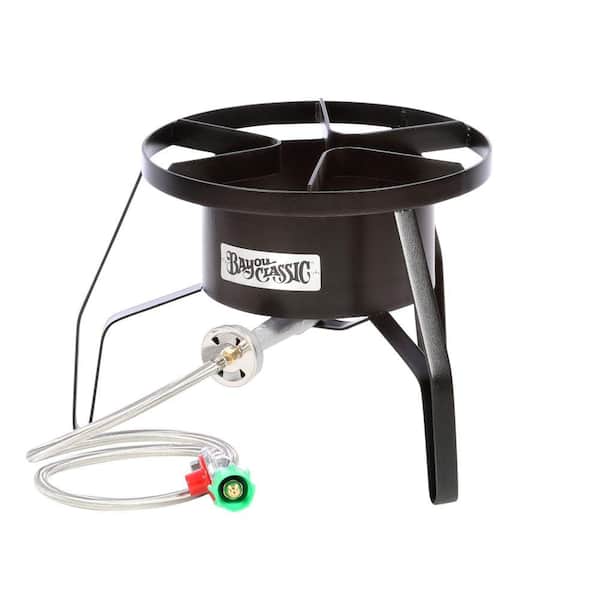 This Bayou Classic gas cooker is a great alternative to a propane gas grill. It's an outdoor cooking solution that is easily portable and can be used for camping, tailgating and backyard gatherings. This cooker accommodates large volume pots up to 120 qts. or 30 gallons. It was designed for not only functionality, but also strength and safety.

Get ready to be impressed with BAYOU CLASSIC'sGet ready to be impressed with BAYOU CLASSIC's SV22 2-Burner Propane Stove. This Metallic VORTEX DESIGN stove provides the same 367,000 BTU output as our popular "Dual Jet Cooker" except it comes with an added vortex design and a 360° windscreen for faster heating. It is constructed with an 18 in. cooking surface and a 12.5 in. tall welded frame with a hose guard. It is functionally designed for stockpots up to 122 Qt. and has a faster recovery time after inserting food in pot. Compliment your Vortex Cooker with our Bayou Boilers and Stainless Stockpots for your crawfish or seafood boils.See Full Product Description

Camping and tailgating go hand in hand withCamping and tailgating go hand in hand with great food. The King Kooker Portable Propane Single Burner Outdoor Camp Stove is perfect for your excursions. The cooker has a 54,000BTU cast burner and a 14" x 14" cooking surface. The cooker legs snap on and off for easy transport and storage. The cooker comes with an adjustable regulator and includes a deep fry thermometer to monitor the temperature of the cooking liquids. Cook all your foods to perfection every time. Try the suggestions in our detailed instruction and recipe booklet, or create your own favorites. King Kooker lets you eat like a king. CSA Design Certified.See Full Product Description