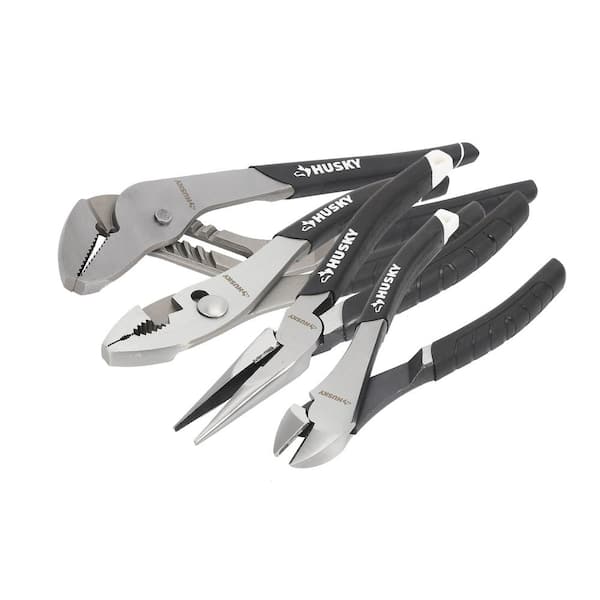 The (4-piece). Pliers Set includes one 7 in. Diagonal Pliers, one 8 in. L Nose Pliers, one 8 in. Slip Joint Pliers, one 10 in. Groove Joint Pliers. The 7 in. H Leverage Diagonal Pliers are specially designed for cutting, rather than gripping or pulling. The jaws are sharp to cut closely and efficiently. They 8 in. H Leverage Long Nose Pliers can be used for a multitude of tasks. They are ideal for getting into tight spots. The 8 in. Standard Slip Joint Pliers are used for turning or bending small objects. They are designed to allow the worker to apply force to the object being gripped. The10 in. Groove Joint Pliers also known as tongue and groove pliers are often used for gripping irregularly shaped objects. They can also be used for clamping materials. This set is a must have for any tool box.

The 3-pack of Compound Pliers feature inductionThe 3-pack of Compound Pliers feature induction hardened cutting blades for improved strength and durability. These double-hinged Compound Pliers from DEWALT amplify the amount of force generated from squeezing the handles, resulting in significantly more gripping and cutting power over conventional pliers. The handles are outfitted with bi-material grips for exceptional control and comfort, resulting in precise maneuverability and minimal fatigue.See Full Product Description