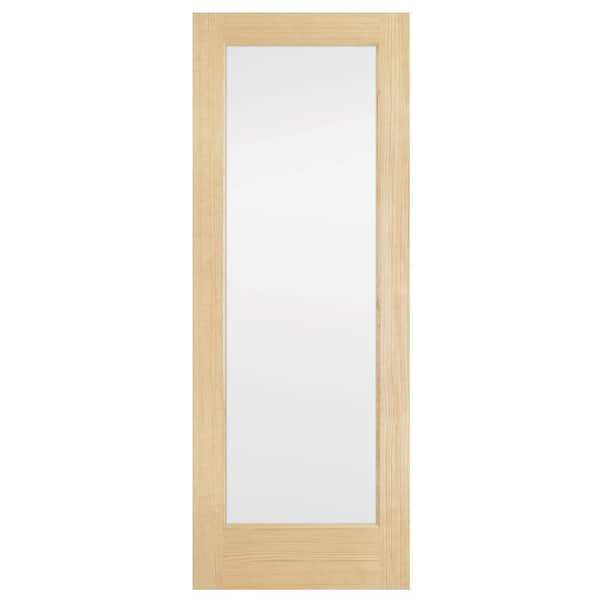 Experience the warmth and beauty of wood with this full lite pine obscure interior slab door. Door is constructed with quality pine veneer over durable LVL core with stile and rail construction. Slab is built to pre-fit size for easy change-out of existing interior doors.

0
Filter by:
Showing 1-10 of 28 reviews
Mar 22, 2015
High-Quality Door
Solid, well-made door. High-quality obscuring glass. Took primer and paint well. It's a go.
by
1 person found this helpful
Dec 9, 2014
Great Barn Door
I installed this door as a Barn Door type at the entrance of the master bath where there was not enough clear wall space for a pocket door due to internal plumbing and electrical. I found the ideal stainless steel Barn Door hardware that was easy to hide with a cornice. Installation looks great.
by
1 person found this helpful
Oct 28, 2014
Used as a divider in the bath
Wanted to have a divider between the master bath sinks and the bedroom. Just something to make it feel and look as if the two parts were in some small way divided with out a full wall look. Seeing this door figured it could be used to do the job. It came out pretty close. When the door is received there is a plastic protective film on the glass. At first you think the glass will not be a frosted as shown in the picture. Once the film is removed, the glass is no longer see through. Thought the door was solid pine. It is not. Rather it is thin layer of pine. The door had some slight damage on the edge where the pine was chipped off. Since molding was going to be used around the door, was able to hide it but could have been an issue if you finished the door to show off the grain.
by
4 people found this helpful
Jul 22, 2014
Good price, great looks
I used 2 doors in a bathroom, One as a pocket door. You cannot see through the glass, but they let light through nicely. Very pleased.
by
6 people found this helpful
Jul 3, 2014
I love this door!
I purchased this door to close off my kitchen from the utility room. I needed something with obscured glass that was affordable and was made of real wood! This door was perfect. It would be super easy to stain to match the other wood in your home. It is also very sturdy. It is not a flimsy door. We mounted ours on a commercial swing latch so the door will swing in either direction. I would definitely recommend this door.
by
8 people found this helpful
Jul 1, 2014
Quality Solid-core Slab Door
I used this door as a sliding door in my basement. It separates the utility area from the living area and turned out to be a great way to save valuable space (a standard seining door takes up about 14 sq. ft. of space). I'm very happy with the quality of the door. My project required a solid core door, as I needed to cut off a few inches on the bottom at an angle. It worked really well. The quality of the frosted glass is pretty good too. I have absolutely no complaints for the price of the door.
by
8 people found this helpful
Mar 9, 2014
Is a Privacy Door After All
This is a follow up to an initial review of the door. The door with the protective film it is shipped in causes the door to appear see through. When you remove the film the door is actually obscured / privacy door. After painting it, removing the film, this is a GREAT PRODUCT and Value for the money.
by
9 people found this helpful
Aug 4, 2015
Obscure Glass Interior Door
We love this door now BUT had trouble getting the glue off the back of the glass after removing film. After trying several different products we finally used rubbing alcohol! This worked perfect!!! It would be a better product if there were instructions on how to remove the glue. Yes our door looked like it wasn't going to be obscured as other people mentioned, but with removal of film and glue it is now perfect.
by
Dec 30, 2014
Great Value!
We are building an on suite to our bedroom and we didn't want a solid door. This was the perfect answer. It's beautifully made, and easy to stain or paint any color you wish. I was disappointed that it took so long to arrive so don't be in a hurry if you order one.
by
1 person found this helpful
Dec 10, 2014
Great door, great price!
This door was a last minute upgrade to a basement finish project. The glaze on the glass is perfect, and adds just enough added flair to a small doorway to push the project in upscale territory. The quality of the door is very fine. I had to cut 2" off the bottom to fit in the space, and the workmanship of the pine was strong throughout.
by
1 person found this helpful
Showing 1-10 of 28 reviews