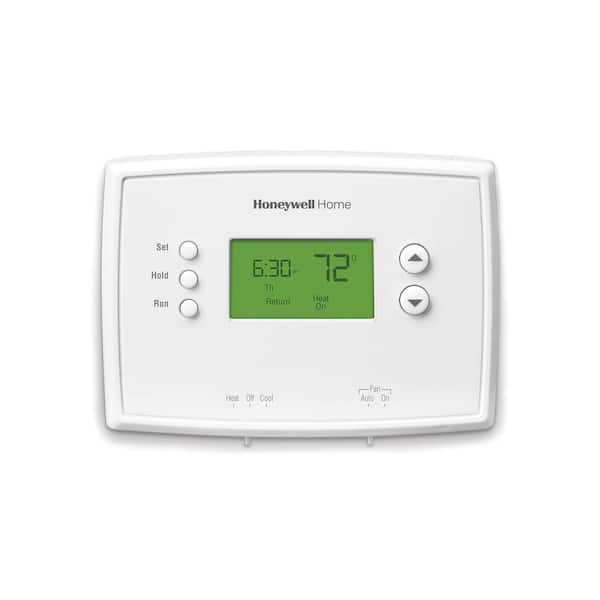 The Honeywell Home 1-Week Programmable Thermostat has a simple interface and offers one basic program for the entire week with 4 program periods. It automatically adjusts the heating or cooling of your home so you are comfortable when you wake up, come home or at any other time you prefer.

Will this install in a camper 2007

If your system is looking for a 24V input from a thermostat to turn on, then the Honeywell Home 1-Week Programmable Thermostat may work. We recommend you contact the original manufacturer of the system to confirm, or to see if they have any recommendations for an appropriate replacement. - Jerry

I bought a RTHL221B. The pictures and description show it being backlight but it is not. Is this model backlight?

What is the difference between this model and RTHL221B ?

$17. Imagine the kiss principle applied to thermostats, and that’s what you get with our 1-Week Programmable Thermostat. It offers basic operation in a sleek one-piece design. You can set a program for the entire week with up to 4 periods per day, accounting for sleep, wake, leave and return. Features like display options for temperature and time, as well as precision comfort control, add to the thermostats simplicity and comfort. AND $44. Bring easy, convenient climate control into your home with the Honeywell 7-Day Programmable Thermostat with Backlight. An extra-large, user friendly display has a backlight for easy use both day and night. The precise temperature control lets you keep your house at the perfect temperature when you are home and away. Program for the weekdays and weekends with 4 program periods per day Easy to use, basic operation keeps programming easy Precise +/- 1 degree F temperature control Backlit display for easy viewing even in dimly lit rooms or hallways Filter change reminder

Does this have the heat pump on it

Sorry,I don’t have a heat pump. I doubt it. Better ask the manufacturer.

Hi besttec, 1 stage thermostat will only work with one W and one Y wires, they are not compatible with auxiliary or emergency heat. multi stage thermostats will work with more than one W or Y wires. If you need assistance verifying compatibility you can contact our tech support team at 1-800-468-1502 Monday - Friday 9 am to 8 pm, Saturday - Sunday 9 am to 5 pm CST.

Can I use this for heating only

You set it for the times you want it and the temperature and it good for the week.

Will it work with a pellet stove

If your stove has 2 wires and 24V this model will work.

Is a Genisys model 7505B Advanced Burner control and an AquaSmart 7600 Boiler control compatible ...

This model should do the trick as both of the provided models are 24Vac Thermostat compatible.

Does this unit require a C wire.

I use it as a simple 2 wire heat only thermostat.

82
Filter by:
Showing 1-10 of 413 reviews
May 23, 2021
Nearly unreadable in hallway with modest lighting
Model I bought was RTH221B and had a gray screen not green as shown. Thermostat display was barely readable making it unsuitable for intended hallway location. The contrast in the actual display was not at all close to that shown on product box. Installation was straightforward with markings on unit and good directions in installation guide.
by Leo
Response from Resideo TeamMay 24, 2021
Hi Leo, we are sorry to hear about this. The RTH221B is not a backlit model, we will be happy to recommend you or help finding a different model at 1 (800) 468-1502 or through social media. - Maria

Feb 15, 2021
Poor Quality Control
I've noticed that this model has varying quality controls: the one I bought previously lasted reliably for years, but the next iteration of the same model often says "Heat On" but fails to engage the boiler, and allows my heat differential to drop several degrees (right now it's 61F in my place, and it's supposed to be 70F). i'm in the middle of New England winter, and some days I wake up shivering and have to huddle in a room with a space heater till the thermostat decides to hail the boiler. Pretty miserable now that I'm at home 24/7 under quarantine. I'm an engineer; I understand sometimes you've got to troubleshoot a product. I've gone through almost every relevant internet resource to try and correct this issue, and I even paid to have a professional come over to look at the thermostat and boiler. I'm on my second replacement, which failed even sooner than the first one (first model started malfunctioning the week after the warrantee expired; Honeywell gave me a replacement, which started showing issues after the first month). Advice: I would look at the form factor of the device: if the text on the front says "Honeywell Home", it's one of the more reliable iterations of this model. If it just says "Honeywell", then good luck. Honeywell used to take pride in their brand, but now they just pass any of my complaints over to Resideo Technologies and wash their hands of the problem.
by Usgan

1 person found this helpful
Jan 15, 2014
This product is easy to use.
The installation manual was simple to read, making the set up a breeze. Program it once an your done.
by Suttle

2 people found this helpful
Jan 14, 2014
Great Value
The Honeywell programmable thermostat is by far the easiest to use. Many programmable thermostats have way to many bells and whistles that just in my opinion complicate your desire to use some simple features. I found the Honeywell use to connect, program and just let run. A great value for the money.
by Irishmansmiling

The Honeywell Home 5-2 Day Programmable ThermostatThe Honeywell Home 5-2 Day Programmable Thermostat with Backlight has a simple interface and offers separate weekday and weekend programming. It continually adjusts the pre-heating or cooling of your home so you are comfortable when you wake up, come home or at any other time you prefer.See Full Product Description

The TX500U, a universal programmable thermostatThe TX500U, a universal programmable thermostat that allows users to easily customize heating and cooling temperatures to meet their comfort levels and schedules. The TX500U can also save energy and reduce utility expenses by automatically lowering or raising temperature settings during off peak hours. Features include easy do it installation, easy to read display, filter change indicator, keyboard lockout any many other value added features for complete customer satisfaction.See Full Product Description