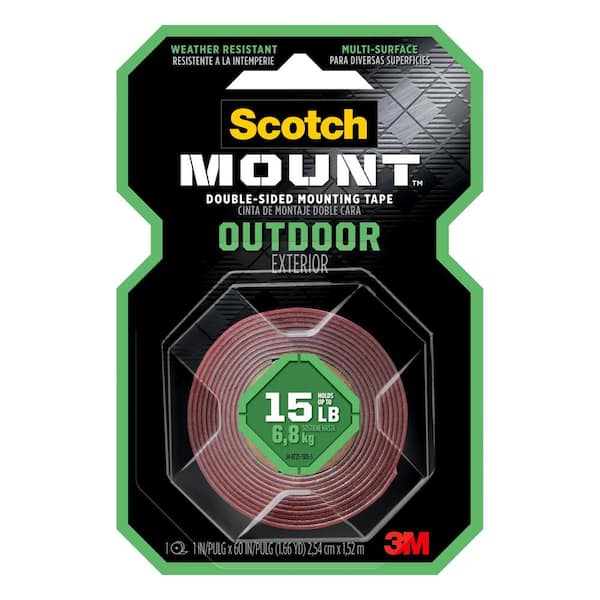 Could this be used to hold a metal drip rail to the bottom of a shower door? Would it hold up t...

It is possible but I think over time the moisture would reduce the adhesive.

How thick is this produce? I want to mount numbers on my door and don't want it to be visible.

can i use it to attach my shower door bottom guide to the steel frame? if yes, is it thinner vers...

Hello - We would like to gather more details about your application in order to better assist you with this. Please connect with us directly at 1-800-494-3552 M-F 8am-5pm CT.

Can i use this tape to attach a ring door bell to siding?

Yes, I have used this 3M tape for numerous outdoor applications. The key is to have a surface that is clean, free of any dirt, dust, moisture, oil or loose paint. Also, keep in mind, once you apply this to that surface, if and when you decide to remove it, it most likely will remove some paint. The adhesive is very strong and is perfect for attaching something like the Ring.

If I used to mount solar lights to vinyl deck post can it come off if need to?

It’s permanent, so if you plan on taking it back apart, it may result in damage to your solar lights or deck post when you try to remove it. Scotch has other options that are not permanent. Maybe the Velcro option will work better, or a similar option that isn’t permanent.

Does this stick to rubber?

Will it work on brick?

Would this hold a 3x 6 candle in a glass holder on top of a brass candlesticks?

Hello - We would like to gather more details about your application in order to better assist you with your question. Please connect with us directly at 1-800-494-3552 M-F 8am-5pm CT. Thank you!

Will this stick to a windshield to mount a camera

Weight-wise, yes it'll hold. I've used this same tape to mount computer speakers to my monitor, no problem. The tape is very strong and tacky. Not too sure though that it'll be able to resist the intense heat once that sun starts beating down on the glass.

5
Filter by:
Showing 1-10 of 69 reviews
Apr 3, 2013
Very Heat Resistant and Strong
This tape was used for a lot of applications. It's as must have a thing as duct tape. (1) Originally selected it for keeping the alarm magnet fixed onto a sliding door frame that faces the sun. It' was a simple but maddening problem because the aluminum frame opposes adhesives. -Tried every other kind of tape, superglue, epoxy, hot glue and it just fell off. The alarm would blare so often I could never set it. The indoor version of the double sided tape would melt and then fall after a week in the Central FL summer. Under the premise that its-possible-that-it-could-exist searched for a theoretical outdoor version. Found it and the magnet has been up for 2 years straight and still going. Yay! (2) Later used this for a mailbox project involving the mounting of black background letters on a new, black post office box. The box is out in front unobstructed so it gets dangerously hot as it receives light 100% of the day. This is the kind of sun that burst two of my heavy duty water hoses. It's been 2 years and the letters are still securely fixed. *** Careful in applying it because it's VERY strong. When putting on the metal address numbers I thought about moving them to the right a bit. It was so stuck on that removal seemed difficult with a little bit of a bad idea flavor -so plan ahead and rehearse the application plan. I plan to mount an outdoor junction box for mp3 jack and outdoor amplifier in the porch. If the mounts on the outdoor speakers give me trouble, I will use this tape too! As a chemist I'm astonished how well the adhesive chemistry works in the REAL WORLD. It holds 5 lbs. To think there's a 10 pound version!
by Tony

Nov 10, 2020
by SANDE
Jun 28, 2020
Doesn't stick at all
Really poor adhesive and hard to untach from the covering
by Jack123987
Response from Social CareJul 2, 2020
Hello, thank you for taking the time to leave your review. Your experience is not what we would expect, and we would appreciate the opportunity to discuss this with you and gather further details. Please connect with our team at 1-800-494-3552 Mo-Fri 8am-5pm CT. Thanks again, and we look forward to your call.