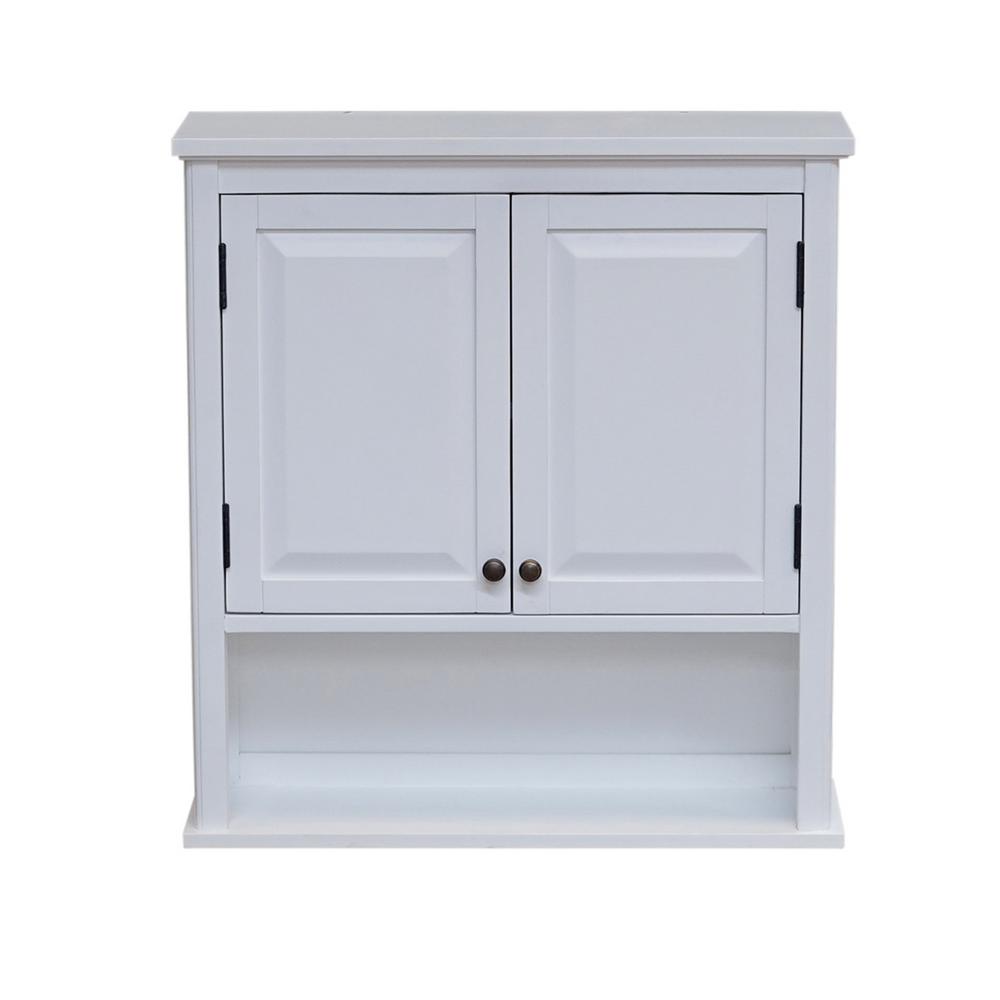 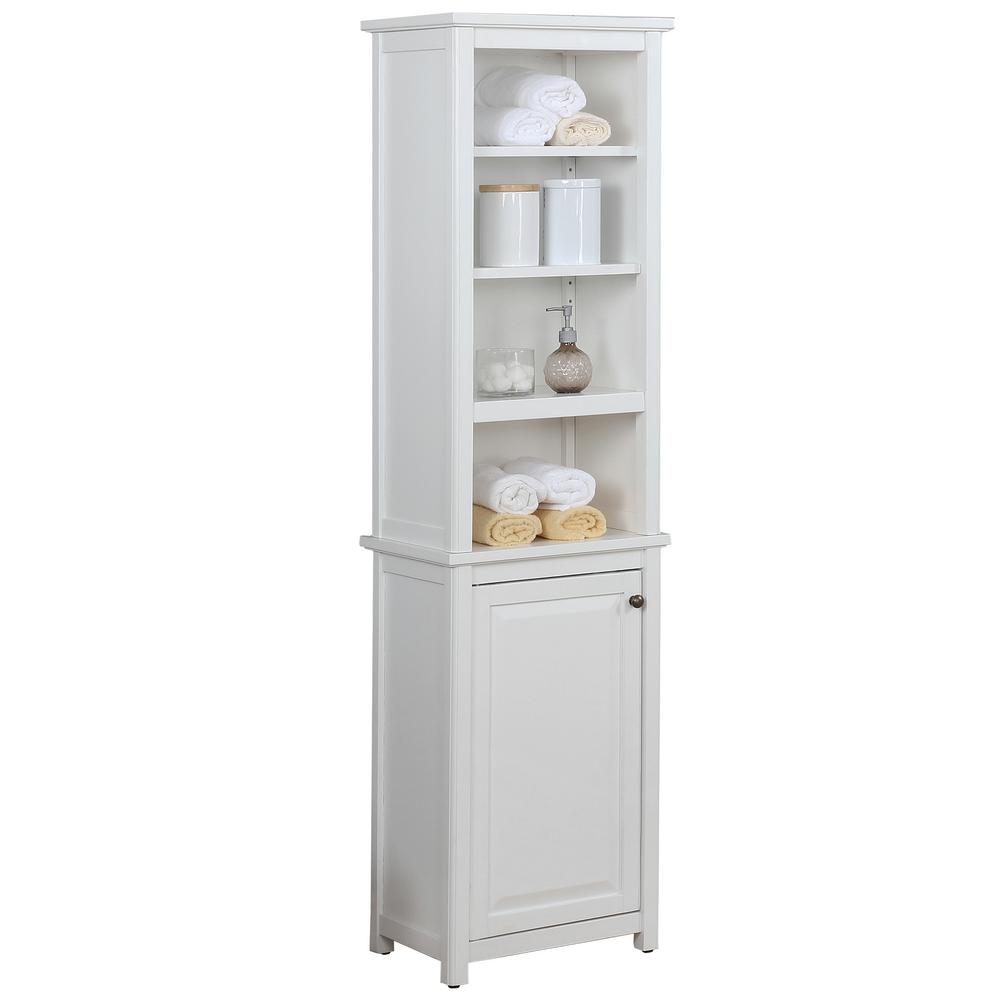 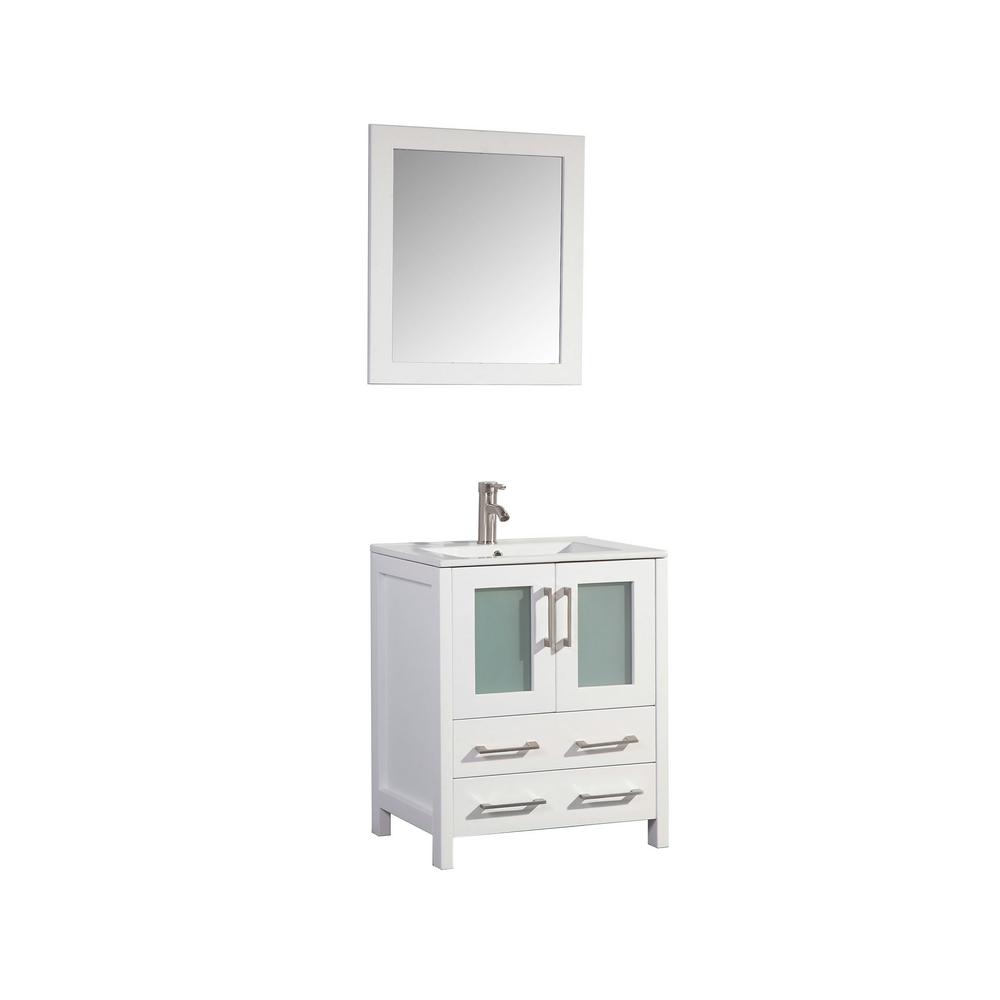 The Dorset collection of bathroom storage furniture is a perfect compliment to any bathroom decor. Fully assembled bath cabinet is ready to hang on your wall, all hardware for hanging is included so you can be ready to use your cabinet soon after its arrival. 2 doors and an open shelf allow you to create your own stylized look or store needed items like extra toilet paper and toiletries.

What is this cabinet made of?

Solid wood. No particle board or plywood. It is custom cabinet maker quality.

Q. How tall is the space inside? A. 18-/34" inside the doors. The center shelf is adjustable within this space in 1" increments. Q. What is the height above each of the shelves. A. See above Q. How tall is the open area at the bottom? A. 8-1/4"

Very nice cabinet but does the smell ever go away?

Yes, but it takes awhile.

How much does this weigh?

Does it have an optional leg base you can buy. My assembly instructions show a base and I can’t mount it in the wall

Yes, it does and I had the same issue.

Where are these made?

Is this model available with brushed aluminum knobs?

It came with antique brass knobs, and I didn't see an option to select another type of hardware. However, that would be a very easy and inexpensive thing to switch out.

Can I get this brown

I believe it only comes in white.

1 person found this helpful
Mar 25, 2020
I’ve never seen a product as well packaged for shipment as this cabinet was. The shipping container was almost twice the size of the cabinet. This Bath Storage Cabinet is beautiful, sturdy, really well made, and flawlessly finished. It’s real wood with no particle board. It attaches to the wall with a thing called a “French Cleat” which I found to be very cleaver. The cleat is attached to the top back of the cabinet with a couple of screws through the top. You remove the cleat from the cabinet and attach it to the wall with the screws provided. Then you simply hang the cabinet on the French Cleat, like a picture on a nail, and replace the two screws on the top. The French Cleat is intended to be attached to wall studs with at least two screws. I installed the cabinet to an outside wall that has drywall on furring strips over concrete block. The furring strips weren’t where they needed to be to locate the cabinet where I wanted it, so I simply used three (3) 3/16” X 3-1/4” Tapcons to attached the cleat, running the screws through the drywall, and into the block behind. It worked beautifully. I put a couple of the screws provided into the drywall just to hold the cleat level while I screwed the Tapcons in. Our master bedroom bathroom is small with not much counter space. Even though we have an extra-large medicine cabinet, what little counter space we have, was always overflowing with stuff we used daily but had no other place to store it. This is a great addition for us, and to any bathroom, large or small, for extra storage space for regularly used toiletries and miscellaneous other stuff you normally find cluttering bathrooms.
by Sailorman

over the toilet cabinet 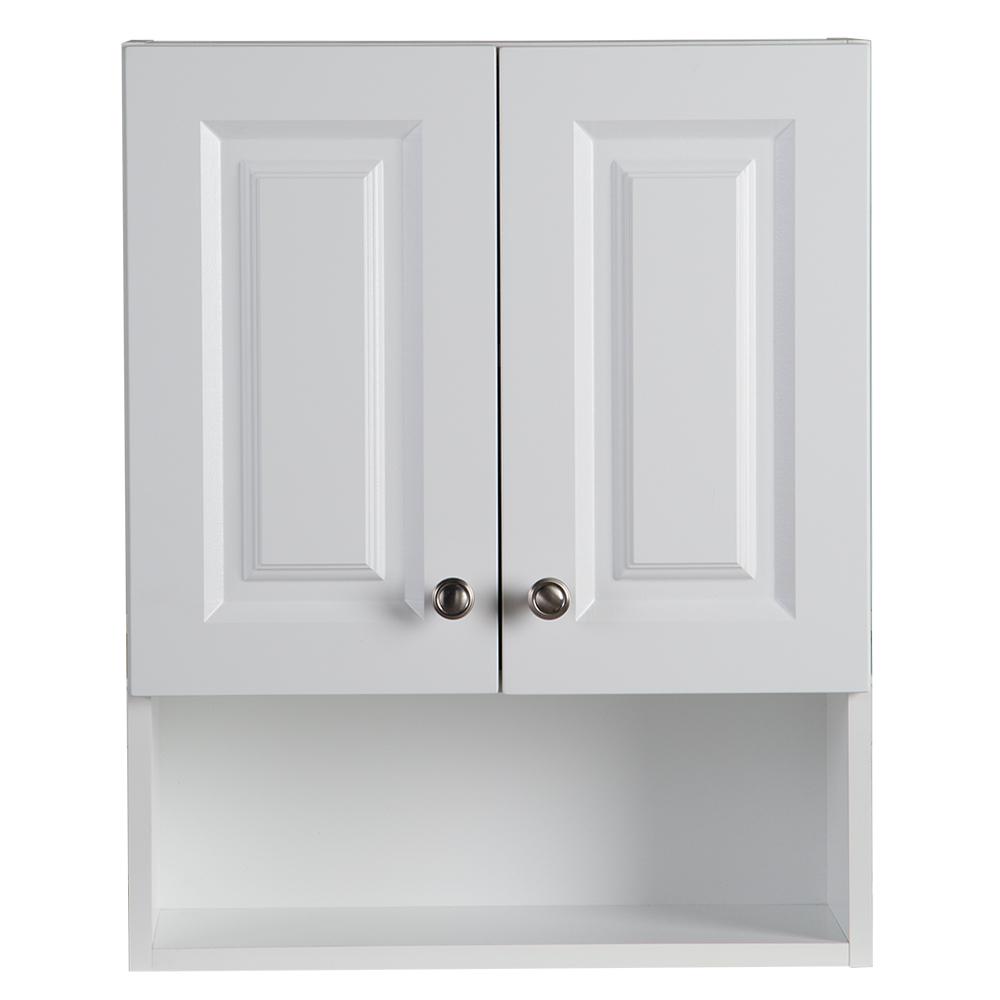 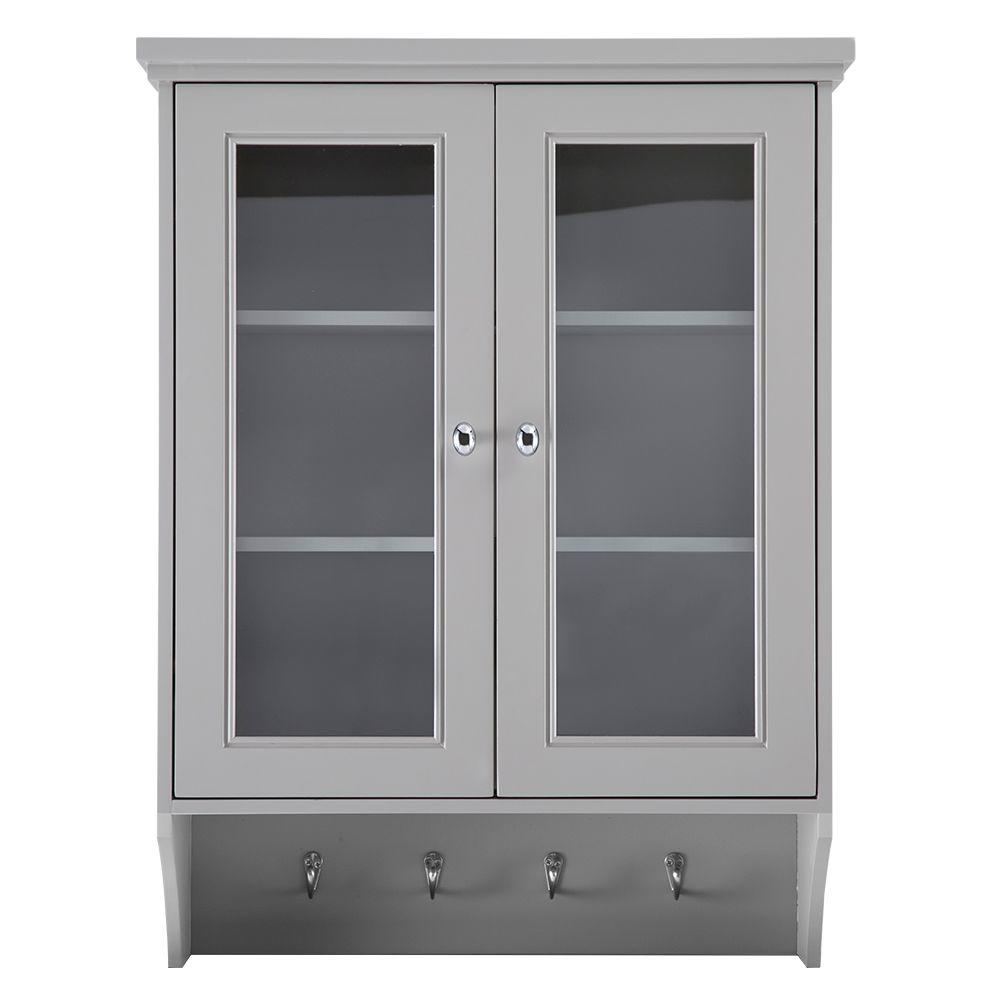 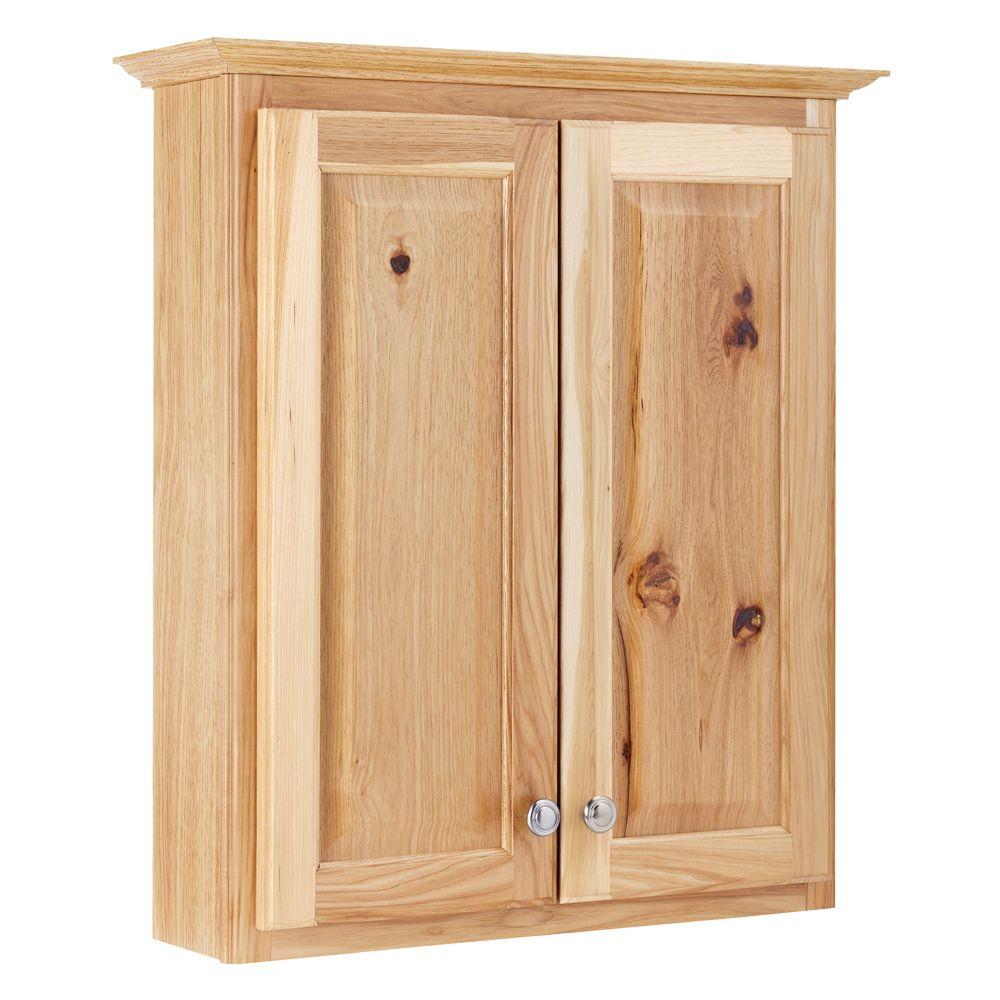 The Glacier Bay Hampton 25-1/2 in. W NaturalThe Glacier Bay Hampton 25-1/2 in. W Natural Hickory Bath Storage Cabinet features a raised-panel door design that will add style and functionality to your bathroom. Constructed primarily of hickory wood with a natural hickory finish, this built-to-last cabinet features ample storage space with two adjustable shelves concealed behind two large doors. Fully assembled for easy installation, pair with other pieces from the Hampton collection to give your bathroom a refreshing upgrade that is simple to achieve and enjoy.See Full Product Description 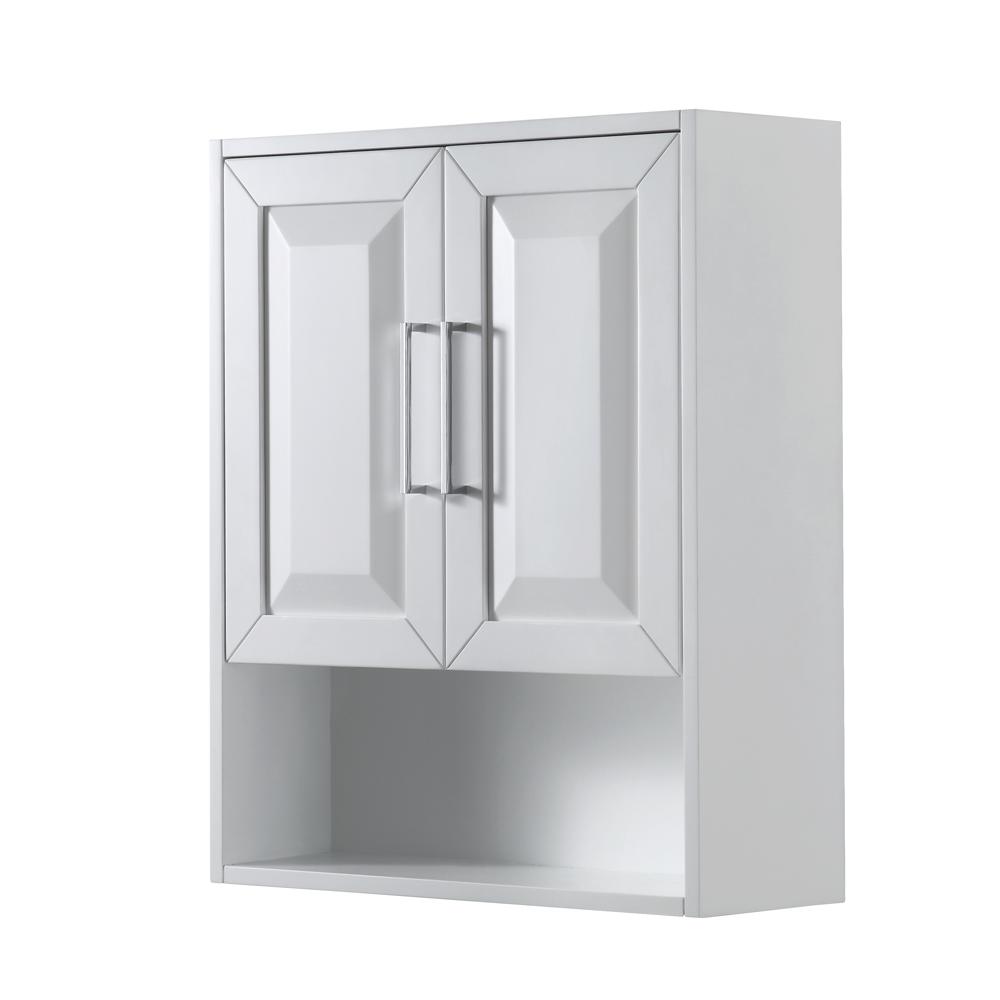 The beautiful Daria collection stands outThe beautiful Daria collection stands out in any bathroom with strong, clean lines and elegant raised panels. There's plenty of cabinet space, the doors are soft-close construction, and chrome detailing completes the look. Daria deftly combines the function of today with a nod to the elegance of the past. It's the new modern classic styling with a contemporary twist.See Full Product Description