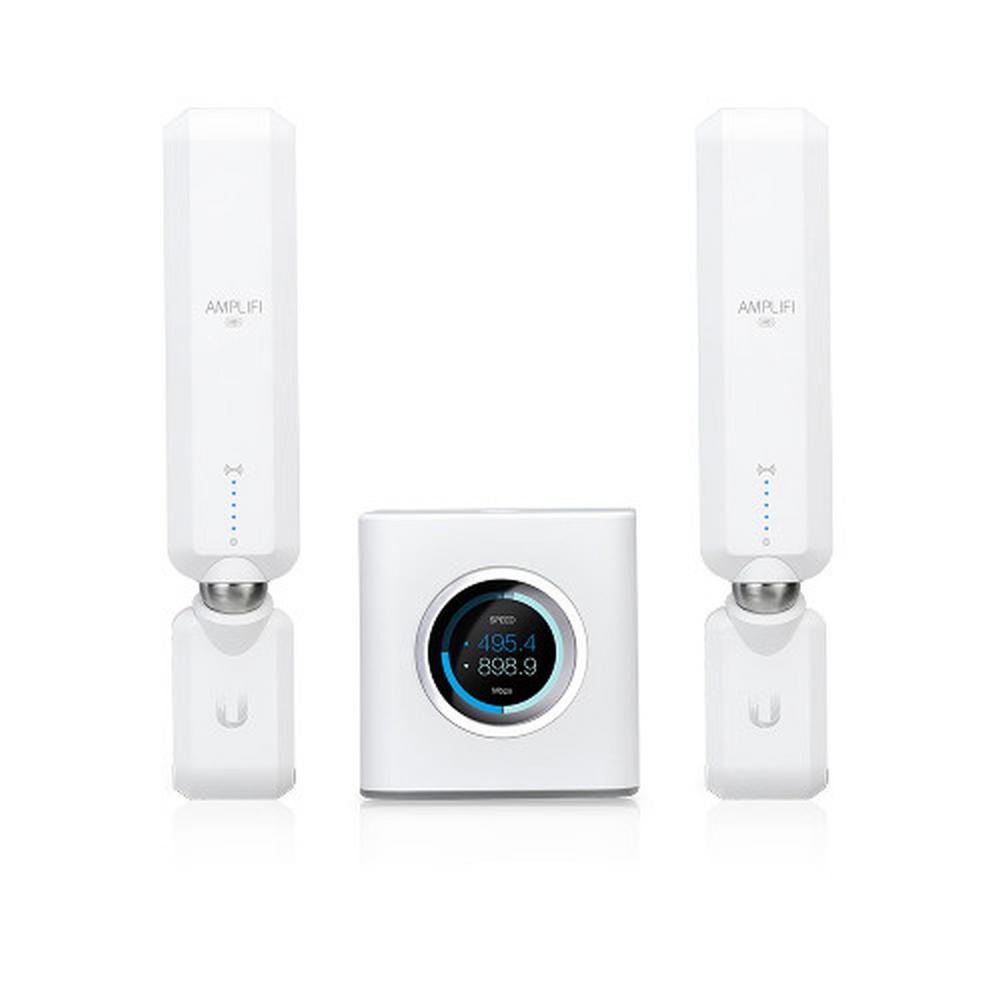 The AmpliFi HD Whole Home Mesh Wi-Fi System includes a Router and two MeshPoints for Wi‑Fi coverage throughout your home. With turbocharged 802.11ac (3 x 3 MIMO) Wi-Fi technology for faster speeds and better coverage, the AmpliFi HD system delivers maximum throughput to meet your streaming and gaming demands with lag-free performance. The Router features an innovative and simple design with an intuitive touchscreen display. The MeshPoints provide enhanced coverage to eliminate dead spots in your home. Download the AmpliFi app and set up your system in mere minutes. The AmpliFi app is available for Android and iOS smartphones. It features device configuration options, powerful reporting metrics, parental controls, remote access and easy to set up guest access.

I currently have your system and have just upgraded to spectrum 400 mg from 100. Do i need to c...

There should be no setting change needed. I have upgraded my speeds twice with this router and it automatically adjusts

How does AmpliFi connect to my Xfinity xfi Gateway, XB6?

You will need to reach out to Ubiquiti Networks at 800-753-5389 for any questions you have regarding Ubiquiti products.

AmpliFi Wi-Fi System by Ubiquiti Labs is an online dropship item only.

The cube itself is a wireless router and the 2 mesh points are for added coverage?

Can you add additional mesh points to the system?

I do not believe so. I don’t see an option to add additional on the router. Two is enough for a three story home

Do the extenders backhaul to the main device via wifi or using the house electrical system?

Via WiFi and they auto-connect, no need to run through steps to connect the mesh

do i need internet service

As a professional tech reviewer, I've tested my fair share of wireless routers. The AmpliFi HD fr...
June 12, 2018
Quality :
4
Value :
3
Seeds Program Review
(What's this)
As a professional tech reviewer, I've tested my fair share of wireless routers. The AmpliFi HD from Ubiquiti is a very interesting, attractive product, and comes from a company with true enterprise-class experience. That being said, it's important to understand what this is and isn't. As far as I'm concerned, this ISN'T a mesh networking system. From what I can tell having done some fairly extensive testing using signal analyzers and bandwidth tests, this actually functions like a router with two separate extenders. Unlike with a true mesh system, the mesh points don't provide anywhere close close to the same speed as the main router. Furthermore, the AmpliFi with both nodes installed actually creates SIX separate networks in your home: 3 on the 5GHz band and 3 on the 2.4GHz band. That is not how true mesh systems work - they appear to your device as a single network (or perhaps one 2.4GHz and one 5GHz), and allow you to jump from node to node without losing connection. With the AmplifiHD, it appeared from my testing that once you are connected to a node, it will not hop over when you get closer to another node if your device is active (for instance, engaged in a video call). So what does this all mean? (1) the speeds are very fast at the base station: around 250Mbps (2) the speed is much slower at the first node: around 60Mbps (3) the speed is very slow at the second node: around 30Mbps (4) you could lose your connection if you move from one end of your house to another on a tablet, laptop, or phone while it's actively streaming content, as you'll be connected to the original node. (5) in many situations, having all three nodes will be slower than using two, because unless your home is large enough to really spread the nodes out, you'll end up connecting to the third and slowest node even when the second, faster node is close enough to use. While Ubiquiti suggests you set up the system with the router in the middle of the home, they of course know as well as anyone else that a broadband connection doesn't typically pop up in the middle of the main room, it's at a perimeter wall, closest to the street. So you're likely going to set this up with the router at one end of the house, an extender in the middle, and another extender at the other end of the house. Overall, I like this product in terms of its sleek design (especially the base station, which doubles as a very cool looking clock), and it even has a touchscreen if you want to set it up without the use of a computer or a smartphone. That's all very user-friendly. The extenders look fine, but they're very bulky, and you'll want to hide them away where they won't be seen. They also get pretty hot, not surprising given that they draw about 3.5W when idle, and more when passing along data. As long as you understand what this product is, you won't be disappointed, but because I expected it to be a true mesh system, I was disappointed. It looks cool, it's easy to use, but it's behind the times. Because there are other mesh products available for far less money, I'd only recommend this one if you really like the cool-looking base station and want to put it in a location where it will be seen and utilized. The one advantage this system could have had over its competitors is that it includes a USB port, but alas, Ubiquiti never enabled it for storage or printer sharing, meaning it offers no functionality.
Was this helpful?
1
0
FOBXH

I’ll have to admit that I was a little giddy opening the package. I’ve been reading about Wi-Fi ...
May 29, 2018
Quality :
5
Value :
5
Seeds Program Review
(What's this)
I’ll have to admit that I was a little giddy opening the package. I’ve been reading about Wi-Fi mesh systems and wondering if they could help the Wi-Fi in my home. Even though I currently have 2 Wi-Fi extenders, my speed is inconsistent and way below the Comcast Performance Internet maximum speed of 60 Mbps. I know 60 is a marketing gimmick, but 30 would be nice. I have a 1 1/2 story house that’s about 3200 square feet. The modem and router are upstairs but 100% of the usage is downstairs. I had an extender in the family room and another in the MBR (which is on the back side of a brick wall). Prior to installation, I took 5 readings each from the MBR, family room and dining room. MBR had download speeds between 2.01 and 8.58. Family room had speeds of 5.03 to 8.09 and the dining room had 13.5 to 21.4. You can see how inconsistent everything is. With the new mesh system, the MBR measured between 12.43 and 23.88 (most were in the 20s). The family room came in with speeds between 24.47 to 25.50 and the dining room was between 29.1 to 40.1. A tremendous improvement throughout the house. My only hiccup in the installation was the router indicated that a software upgrade was available so I installed it. As you would expect, it lost the connection to the app because it rebooted, but I needed to close and reopen the app for it to connect back with the router. Not a big deal. You will have the option to use your existing password or create a new one. You can also you your old network name if you want to. The router is sharp looking and you would not mind displaying it on a bookshelf for all to see. I didn’t mention the upload speeds, but they also improved and became much more consistent. The improvement was not as dramatic as the download speeds.
Pros: Clear Instructions, Compact, Easy Installation, Easy to Use, Lots of Features, Nice Design, Stylish
Was this helpful?
1
0
SteveVA

This is the best WiFi router I've had and finally provides great WiFi in the basement. I live in ...
May 27, 2018
Quality :
5
Value :
5
Seeds Program Review
(What's this)
This is the best WiFi router I've had and finally provides great WiFi in the basement. I live in a 1,200 sqft home with a finished basement; although a small home, WiFi has been hard to extend well throughout the house. It is very easy to set up, speeds are fast and the app gives you a lot of control over the router and all devices in on it (even ethernet-attached) as well as letting you see the performance of the system. It arrived at my house packaged well with very few parts; the router, two mesh, an ethernet cable, power cord for router and a quick start guide. Set up took 10 minutes, surprisingly easy with the quick start guide. Bluetooth was needed for set-up and if you run into trouble, there is customer support. The WiFi is now so good I was able to upload the photos for this review without moving my laptop upstairs! I also can stream on my Roku stick in the basement and get better WiFi outside in the yard and on the patio. Phone app App is awesome, gives network/mesh status, lists devices on network, allows you to set up a guest network (no password and can be timed) and control all users. You can also run a performance test to see how fast your internet is. In my case, I am getting 26 mbps more than I pay for. The app also lets you reboot the router from your phone and change all settings. Router Through the app, I named my WiFi network the same as before so all devices and an existing extender picked right back up, no need to reconnect them. This router serves 2.4 and 5 GHz devices off the same WiFi network. So the router doesn’t have two seperate WiFi signals (one for 2.4 and one for 5), which is great. 5 GHz is great for us because the baby monitor is on 2.4 and WiFi at 2.4 GHz interferes with the signal. The router is a cool cube with 6 ethernet ports. It lights up but goes into sleep mode for a predesignated time you set on the app. By touching the screen on the router you can view your current data usage, IP address, etc. A simple screen with the date and time is the default. Mesh The mesh just have to be plugged in, then they find the router and auto-connect. It’s as simple as that. The meshes are already programmed to the router which is great. The mesh extend the WiFi network like the router does with the same network name; no need to log into a separate network like you have to with a WiFi extender. Meshes can be renamed on the app but can only signal in one band, either 2.4 GHz or 5 GHz. My basement mesh is set to 2.4 for my laptop but smart phones and the Roku stick work on 2.4 too. After connected, each mesh tells you the signal strength with illuminated dots. The mesh are attached to holders with strong magnets. Although this is pretty neat, I fear my 2-year old will now run off with them. I do wish the mesh had at least one ethernet port as I need onto to plug in the NVR for my security system. Instead, I just keep it plugged into the WiFi extender I have for it. Overall, installation was painless and I have great WiFi now, especially in my basement. I couldn't be happier.
Pros: Clear Instructions, Compact, Easy Installation, Easy to Use, Lots of Features, Nice Design
Was this helpful?
5
0
bn2wild