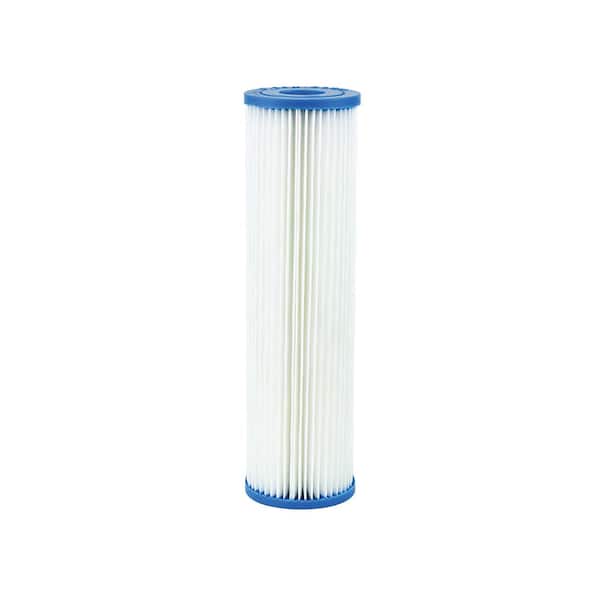 The Replacement Post-filter attaches to the Aquasana Whole House Filter system, after the filter tank. This post-filter is considered a polishing agent, removing any remaining sediment and organic particles from your water. This cartridge should be replaced every nine to twelve months.

Customer review from aquasana.com
Apr 20, 2022
by
Sep 21, 2021
by
Aug 31, 2021
Still have bad hard water spots
This seems to work good but doesn’t soften the water at all still leaves hard water spots everywhere
by

Customer review from aquasana.com
Jul 29, 2021
Great filter at reasonable price...
Great filter at reasonable price
by
Jul 21, 2021
Post filter replacements are defective
This review is for the Post-Filter Replacement only. Back in March, I ordered 3 replacements, as well as a few pre-filters. I didn't need to use one of these until the beginning of this month, and replaced the post-filter that was in there for the 3 previous months. Less than a week later, we were having severe water pressure loss in the entire house. I did some tests, timing filling a 5 gallon bucket from the well house. First, bypassing the system entirely. Fills fast. Then through the system. Very slow (we replaced the main tank last summer after it wore out after a total of 70k gallons of use, but are only at 35k gallons on this tank). Then I tried with and without the pre- and post- filters. That's when I figure out that it was the post filter that was causing the pressure to drop by 300%. I replaced that post filter, worked great. For about 5 days. Same thing, loss of pressure. Replaced with the 3rd filter, which also worked for about 5 days. After writing this review, I'm walking back to the well house and removing the post filter entirely. Either they sold me the wrong one, or they sold defective filters. The new ones didn't even change color, they just blocked the flow. So no more post-filter. And hoping that the 500k whole house main filter lasts longer this time, as we won't be using Aquasana again, nor giving anything but a warning to avoid whenever the topic comes up on nextdoor.
by

Customer review from aquasana.com
Jan 22, 2021
Works great
This filter last close to 6 moths but I usually replace it in five we have some nasty well water. Once changed the water taste and smells great
by

The Aquasana 10 in. Replacement CartridgeThe Aquasana 10 in. Replacement Cartridge Filter is designed for the Rhino Series Whole House Water Filtration Systems. The sediment pre-filter is used to prevent dirt and sediment particles from entering and clogging the main filter unit. Keep chemicals and sediment buildup out of your water supply and protect your filtration system as well as your household appliances from corrosion.View Full Product Description

Chloramine is commonly and increasingly usedChloramine is commonly and increasingly used as an alternative disinfectant to chlorination in municipal water systems. High volume chloraminated water discharge is toxic to fish, amphibians, and water-based reptiles. Although the effects of chloramine on human health is inconclusive, some people have experienced negative symptoms such as burning skin, red rashes, itching, dry mouth and throat, digestive problems, wheezing, and severe asthma. With regards to hydrogen sulfide, this common water pollutant does not pose a health risk but it does give water an unpleasant rotten egg smell and taste.The FI-CHLORAMINE10-BB water filters utilize advanced catalytic granular activated carbon to effectively remove chloramine and hydrogen sulfide from the water. Catalytic carbon retains all of the absorptive properties of activated carbon, but it also has the unique ability to promote or catalyze chemical reactions. First, it adsorbs contaminants such as sulfides onto the surface of the carbon particles. Then, in the presence of dissolved oxygen, it oxidizes the sulfides and converts them into non-objectionable compounds. This conversion process makes catalytic activated carbon the most effective media available for the removal of chloramines and hydrogen sulfide from water supplies.The FI-CHLORAMINE10-BB filter will fit in our Big Blue 10" standard housings and treat up to 3,500 gallons of water.View Full Product Description

The Whirlpool Premium Carbon Whole Home WaterThe Whirlpool Premium Carbon Whole Home Water Filter (WHA4FF5) delivers cleaner, clearer better tasting water throughout your home. This filter is NSF certified to reduce chlorine taste and odor, sediment, sand and silt and last up to 6 months which is twice as long as most other whole home filters. With a micron rating of less than 1, it will capture the smallest contaminants for both municipal and well water supplies. This filter delivers cleaner, better tasting water without flow reduction.View Full Product Description