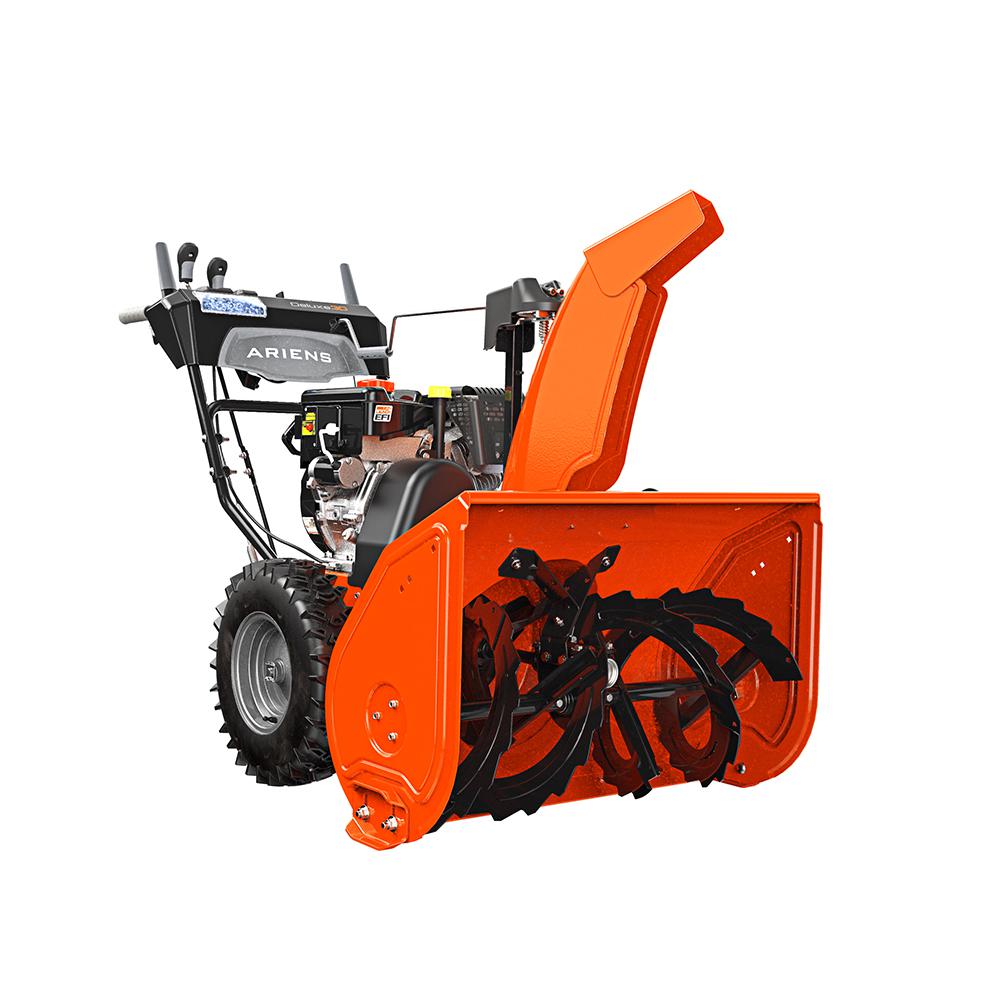 Stop worrying about starting your snow blower because of old fuel, even from last season, with the Ariens Deluxe 30 2-stage snow blower with Electronic Fuel Ignition. EFI eliminates the need for a carburetor which is the primary cause of non-starting due to gummed and clogged carburetor parts. Plus, EFI has better fuel efficiency, easier starting and delivers constant RPM power even under heavy load.

how difficult is it to assemble ?

If you order it online from HomeDepot.com like I did it is assembled and delivered by a Ariens dealer in the area at no extra charge It also comes tested and the dealer starts it up for you and answers any questions you may have.. Otherwise if you buy it in the store its assembled by Home Depot employees.

does this init have the heated handles,?

Yes, it has heated handles that you can turn on or off.

How long will it run before you need to refueI. Is the extremely small gas tank an issue?

What kind of fuel should be used for this Deluxe 30 EFI model? Are there any particular recommend...

Regular unleaded with Marine Stabil is acceptable, ideally non-ethanal gas with Marine Stabil should be used if you have a source for such gas nearby. Also, if the rotary control for the engine speed is moving on its own, remove the knob with a small hex wrench (it's held in place by a tiny setscrew) and cut a few small pieces of self-adhesive Velcro that can stick to the console and under the knob (the fuzzy part of the Velcro, not the hooked part), then push down on the knob and tighten; that will increase the friction and the knob will stay in one place. It may take some trial and error with the Velcro until you have just the right amount. This is a workaround until Ariens fixes what should never have escaped the factory - a notched rotary control is what they need to use.

I'm having one of these delivered tomorrow. In order to be prepared, I'd like to buy gas and the ...

Jon, Thank you for choosing Ariens! Your machine will take a 5W30 and will hold 32oz. We recommend a high octane ethanol free gas to use in your snow throw.

Does it have handwarmers?

Yes, there is handwarmers on this model.

I filled up the gas tank and put a little more oil. I started it up and it was literally spraying...

I opted for the free white glove delivery. Altough I purchased it at homedepot.com it was assembled and delivered by a authourized Ariens dealer. The fuel tank was fuel and the guy who delivered it showed my how everything worked and started it up before he left. I am very satisfied with the way this machine throws either wet or powered snow, well over 40 feet. I was told by an employee it was better to order it on line as the people that assemble it know what thet're doing and they test it before they delivery it.

I can not get it to start. Is there a fuel valve?

I just ran into this problem. I have the Deluxe 30 EFI. My machine is 9 months old and wouldn't start. Your machine SHOULD HAVE come with a plug-in charger (similar to cell phone charger size) and it plugs in under the throttle control. You have to disconnect the connector and plug in the charger. Took about 45 minutes to charge. Light turns green when charged. Starts up every time now on first pull. Extension cord that plugs into electric start DOES NOT CHARGE the fuel pump. It only gives power to the electric start.

Our new snowblower cranks but doesn’t start. Where do we look first?

did you follow the start up instructions. I think there is a switch or wire that needs connected first

My snow blower will not run at full idle, it spits and spurts with lots of black smoke coming out of the exhaust, why?

First I would make sure the fuel is fresh and not old. Second, you need to make sure to apply stabilizer in the fuel to prevent sputtering due to ethanol additives which are added in the summer in preparation for winter.

loyalcustomer
Disappointed
January 3, 2021
Bought this snow blower. Once I got it home, I checked the gas, oil, spark plug and all other connections. Read over instruction manual several times and also watched several videos of the startup and operation of this model. Couldn't get it to start after 2 hours of trouble shooting. Brought the unit back to place of purchase and was told that 3 other customers brought the same model back because they couldn't get theirs to start either. Would not recommend this product or any Ariens snow blower with electronic fuel injection.
Was this helpful?
0
0
Response from AriensJanuary 18, 2021
We’re very sorry you didn’t have a good experience with your Ariens product and that we lost you as a customer. In an effort to help us improve, we strongly encourage you to share details of your experience at our customer support portal at https://support.ariens.com/ and include the 6-digit model number and the 6-digit serial number in your response. We want to ensure that our product support, development and manufacturing teams are aware of your product issue so corrections can be made, if necessary.