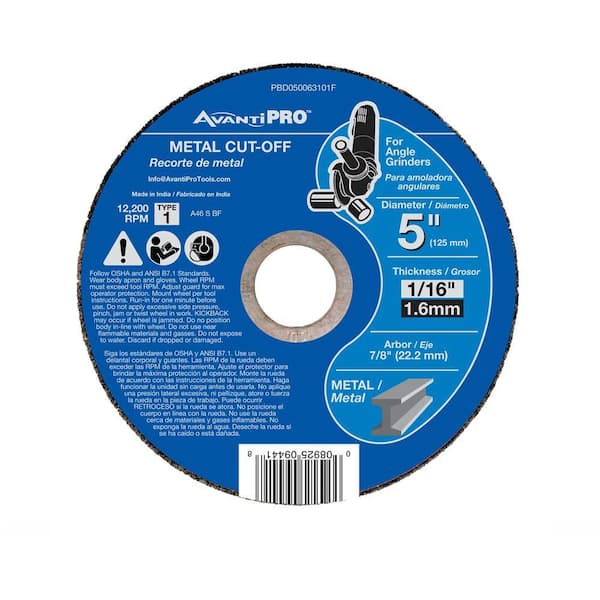 AvantiPRO Bonded Metal Cut-Off Disc is designed for cutting and slotting all types of metal, including sheet metal and roof decking. This cut-off disc is for use in angle grinders and is designed for metal cutting.

Will this cut cast iron?

Yes, this grinding wheel can be used to grind cast iron.

1
Filter by:
Showing 1-10 of 11 reviews
Mar 29, 2016
Great Value!
I used these on a Milwaukee Fuel 5" grinder to cut down a smashed picnic table (tree cutting). The steel pipes were 1/4" thick, and about 3-4" in diameter (maybe Schedule 40). My Home Depot had these 5" Avanti Pro, and also some 4-1/2" Diablo (the 5" Diablo was out of stock). Based on the 1 star review, I did not expect much; however, the Avanti performed GREAT, and the Diablo wore out very quickly (which was a little surprising). The attached pictures shows an NEW 5" Avanti disk, the two USED Avanti disks were used for the majority of the cutting operations, and the single Diablo disk did the least amount of cutting (I cut two times on one pipe), and it wore out very quickly. The Diablo was a 0.040" disk, and the Avanti are 1/16" (0.063").
by aTypicalEngineer808