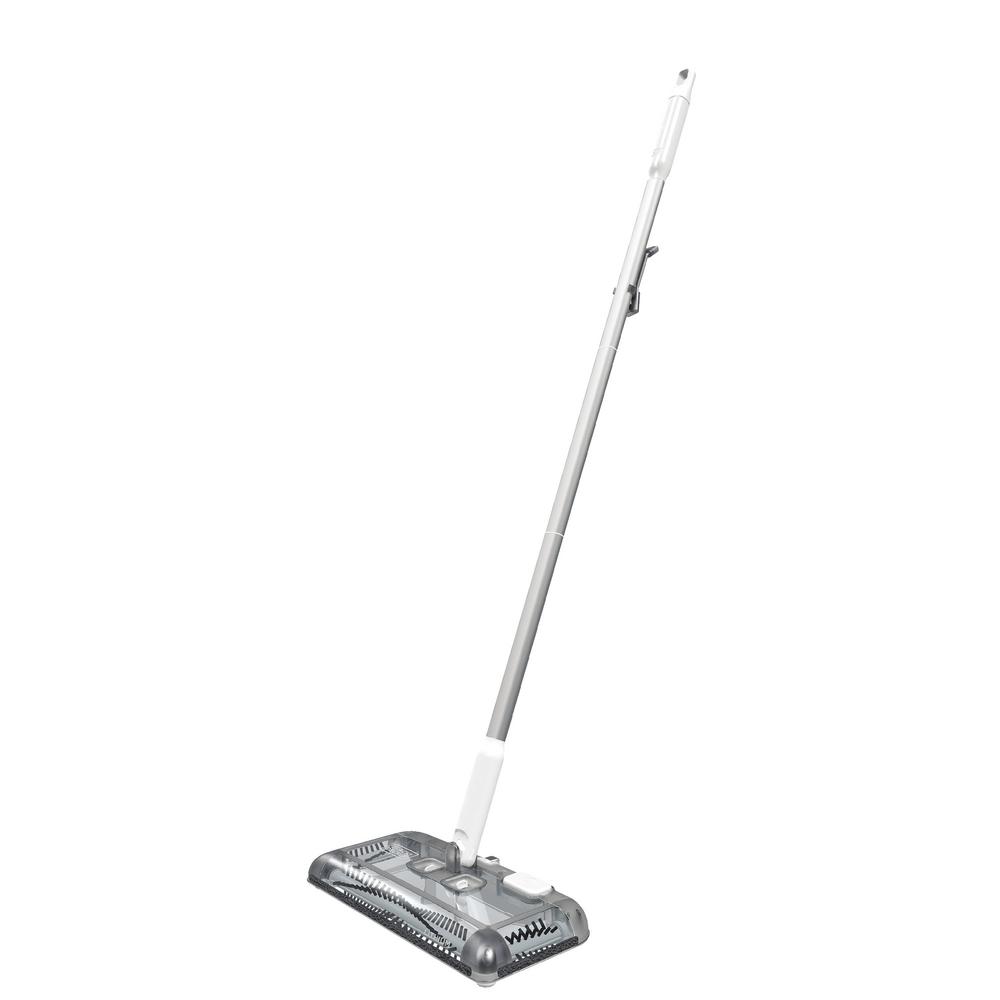 Lightweight and easy to use, BLACK+DECKER powered sweepers make it a breeze to clean your floors, under furniture and along baseboards. With a long lasting charge, the lithium ion battery can power quick pickups all week long. With an easy empty dustbin, you can keep hands clean too.

Lightweight and easy to use, BLACK+DECKER powered sweepers make it a breeze to clean your floors, under furniture and along baseboards. With a long lasting charge, the lithium ion battery can power quick pickups all week long. With an easy empty dustbin, you can keep hands clean too.

Can you just but the charger for this only

My husband did not want me to buy this sweeper but he let me get it anyway. I intended to give this a better review but I can't. After using it twice, it stopped turning on. My husband is a retired design/test engineer who is used to taking things apart, diagnosing the problem and fixing them. That's what he did to fix this sweeper. He quickly figured out that a crimped/squished wire was the problem. He took it out in the garage for about 5 minutes and brought it back in the house working. A brand new sweeper that I liked gets a not great review because the person who put it together was sloppy.
Was this helpful?
0
0
EDWARD
Junk. Battery dies, just as others had reported....
November 26, 2020
Junk. Battery dies, just as others had reported.
Was this helpful?
0
0
HomeDepotCustomer
Rating provided by a verified purchaser...
November 16, 2020
Rating provided by a verified purchaser
Was this helpful?
0
0
mdz1951
Rechargeable battery doesn't last
November 14, 2020
Loved this purchase until the battery started staying charged for less and less time until it wouldn't hold a charge at all.
Was this helpful?
0
0
Gloriadanielle
Canton nc
Horrible.
June 16, 2020
Customer review from blackanddecker.com

About a month into buying this it won’t hold charge it seems like. It will power on for maybe 8 seconds before turning off. Others have had same problem. Would NOT recommend to anyone.
Was this helpful?
0
0
KRPKRP
Southbury, CT
Turns off after few seconds.
May 15, 2020
Customer review from blackanddecker.com

Worked great for about a month, then it started turning off every 5 seconds. I see others have this issue too. Still under warranty, but don't want the hassle of driving to service center or paying to ship both ways. Also, was working ok on bare floors, but not well on rugs. Has trouble sweeping on rugs even before it started to turn off. Would not buy again.
Was this helpful?
0
0
chelidiaz
Montgomery,AL
Daily Sweeper
February 7, 2020
Customer review from blackanddecker.com

it's great for a daily sweep, definitely not a replacement for my vacuum but this makes cleaning after a toddler so easy
Was this helpful?
0
0
Melissa73
Texas
Works like a charm!
January 26, 2020
Customer review from blackanddecker.com

I received this as a Christmas gift. It's easy to maneuver. Charges quickly. Very happy with it!
Was this helpful?
0
0
MMichelle
San Francisco, CA
B+D Contributes to Throwaway Culture
January 11, 2020
Customer review from blackanddecker.com

I REALLY want to like this product as it is perfect for my kitchen and bathroom floors (I use a heavy duty stand up for liv rm & bedroom carpet), but sadly, after 3 attempts, I simply can't. I bought one in March 2019 at the same time that I bought B+D Flex Vac (dust buster). Both B+D, both Lithium battery, both same basic idea of charging, read both manuals and charged them properly (10+ hours initially, can be left charging when not in use). The B+D Power Sweeper worked great for the first few months and then died. I thought it was because it had been unplugged too long and lost its charge. So I recharged it 10+ hours - light went on during charging, light went off indicating done charging, but no power when I pushed the power button. Repeated this using EVERY plug in the house just in case it was a currency issue. No go. Returned it. They issued a store credit which I used to get a new one thinking it was that one only. Charged the new one 10+ hours - light went on during charging, light went off indicating done charging, checked it and power went on so I thought I was all was good. Kept on the charger and went to work. That night no power when I pushed the power button. I called B+D hoping there was someone in Tech Support that could pinpoint what I might be doing wrong. No Tech Support. They referred me to a service center 4 hours away (!). I asked if she had any info on the product -- as this appears to be recurring? No. She said she would ship a new one to me complimentary and I could recycle this one. I pointed out this is a terrible practice, just adding to landfills instead of solving the problem but that whole concept fell on deaf ears. So she sent a new one. I was hopeful - maybe the retailer got a bad batch. Maybe the manufacturer will have a good one. Received it. EXACT repeat. Looked online to read others reviews confirming my same experience. One reviewer even said her husband repairs small appliances and opened it up to see a small wire necessary for the Lithium battery to work was shoddily installed bent. He corrected it and it worked from that point forward. So moral of the story: it's a gamble whether you will get one that was poorly manufactured (or like me, 3 that were poorly manufactured). And btw, the Flex Vac Lithium dust buster charges -- and works -- like a champ. But it is used for an entirely different function. The B+D Lithium Powered Sweeper, while a seemingly great design, is poorly manufactured and B+D doesn't care. Just keep throwing new ones at you and add to the landfills.
Was this helpful?
0
0
Mimmie
Toledo Ohio
Terrible
December 26, 2019
Customer review from blackanddecker.com

Christmas present, stop working after use of about three times. Start but shuts off, you have to hit the button, the minute you push it it shuts off again.
Was this helpful?
0
0
Review this Product
Share your thoughts with other customers