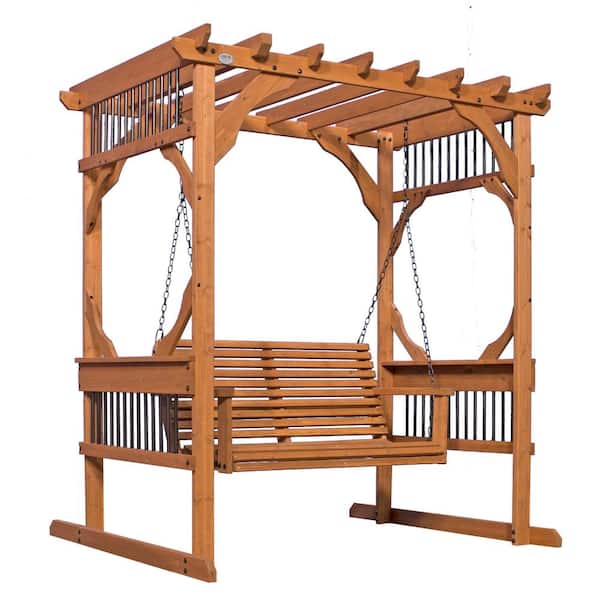 This outdoor Cedar Pergola Swing provides a distinctive focal point for your backyard or patio. A beautiful newly designed, all-natural cedar swing for the backyard. This free-standing pergola swing offers the perfect place to relax and enjoy the outdoors. The pergola top helps define the space and complement any landscape.

Can this be attached/anchored to trex decking, if yes how?

No, it is not recommended for trex decking.

Do you all sale hardware for the swing set

Hi Chris, we do not sell hardware separately. However, please contact us directly at (800) 856-4445 if you need replacements.

Can this be painted in white?

It comes stained but not lacquered. I would imagine you could paint it with a good out-door paint and it would weather better.

What is the grade of the cedar?

I'm not a wood expert, but here are my observations: Entire swing is 300 pounds, including 52 metal cylinders; my impression of the wood was heavier than balsa but light as very dry pine. It came stained but not lacquered; despite its smelling like cedar, I have doubts. I've certainly touched cedar play-sets that were smoother and felt more solid.

How Difficult is this to Put Together. And How Long does it Take? And Warranty

As long as you organize the parts in assembly phases, as suggested, this wasn't a difficult project. I'm a middle aged woman, paced myself over several days, and it came together without any problems. I'm certain a couple of men used to doing this type of project could finish in a day or less.

What is the weight limit

Can I put this on lay away?

what is the return policy for this product? Is there any way you guys install this for me? I live...

It arrived damaged, and I had no trouble returning it to the store.

Does Home Depot have installers and assemblers for hire?

4
Filter by:
Showing 1-10 of 19 reviews
May 15, 2018
Overall it was easy to assemble except that the wood was pretty dry and susceptible to breakage. ...
Overall it was easy to assemble except that the wood was pretty dry and susceptible to breakage. It is beautiful assembled.
by PM
3 people found this helpful
May 8, 2018
Too bad I ordered before the first reviewer finished his review. It's pretty, but not so very hig...
Too bad I ordered before the first reviewer finished his review. It's pretty, but not so very high quality. I don't really expect it to last, particularly with all the subtle joint movement and creaking/groaning. (And, yes, it's on level ground, all fasteners in correct place and tightened to extent possible without damaging wood, etc.) To the manufacturer, there are two main things that you need to consider: 1) Get a drill press, and 2) have a tech writer who has never before assembled anything actually assemble the thing WHILE WRITING the assembly instructions. (There were repeated steps, missing caveats, etc.) To the buyer: wood is very light-weight; it smells vaguely like cedar, but I have serious doubts. A few (of many) members were warped or twisted despite being well-dried (although I could pull into alignment with hardware provided) and/or damaged in transit, some pieces splintered because screw holes were too close to edge, etc. Wooden pieces are stained (although a few large spots were missed), but not covered with lacquer or anything to resist weathering. Also, this was apparently manufactured without a drill press because in some cases, the through-holes were drilled half-way from each side and didn't meet in the middle. Also, on the seat itself, the pilot holes in the center of the seat slats were centered rather than off-set to meet the actual center support piece when assembled; what that means is that I have holes in the center of my seat where there are no fasteners because I had to drill my own holes to actually line up with the seat when assembled per the instructions. Also, the pilot holes for the little "feet" were too large, so the feet fall out...again and again and again. I finally had to remove them because there's no telling where one of the four went after the normal moves involved in initially setting the sides up and connecting the "roof" cross-pieces. There were a few pieces of hardware which were either incorrectly sized or the members they jointed were not dimensionally correct because air space remains when the through-bolt is bottomed out in the nut. To the poor guy that has to install what the buyer bought: take care to look for the pilot holes that are drilled in the large upright members; it is possible to begin the assembly process with the pilot holes on the wrong side if you don't pay close attention; nothing in the instructions remind you to check locations/orientation of pilot holes. Also, each little piece must be assembled, so make sure you have a "gapping" tool (like a wrench handle or whatever is the right dimension--which the instructions actually do mention!) to properly gap the seat slats. Also note that there's no tool list in the instructions, but I needed not only the little half-way Allen-type hi-torque wrenches that were provided (which missed the driver on the long end that would have worked much better in those deep-well holes so that you didn't have to re-set the wrench every quarter-turn), but also needed #2 cross-tip and flat-head and 13mm nut driver and/or adjustable-jaw back-up wrench on the hardware. It wasn't hard to assemble, but there were a few irritants. You will want a colleague when initially connecting the horizontal top pieces to the two sides.
by Kat
Response from BYDSalesJun 11, 2018
Hi Kat, We apologize for the issues. Please understand we want to ensure you are satisfied with your purchase. Like all new outdoor wooden structures they will make some noise as the wood rubs against itself, over time that noise should deafen. Keep in mind your swing set comes with a full 1 year warrant and extended 5 year pro-rated warranty. With the warranty and maintenance and care, your swing should last for many years.. Please do not hesitate to contact Backyard Discovery with any issues. Thank you for letting us know your assembly concerns so we can address this issues.

The combination of unique design and superiorThe combination of unique design and superior quality make this beautiful chair a masterful addition to your home or camp. Multiple layers of weatherproofed spruce wood guarantee maximum stability and safety. The Globo Chair is equipped with a big soft cushion which makes it a real cozy place to spend an afternoon. The fabric of the cushion is Agora from Tuvatextil, a high performance solution dyed acrylic fabric that is weather resistant, U/V resistant and stain resistant. Dimensions: 48 in. L x 30 in. W x 48 in. H, weight: 31 lbs. weight capacity: 260 lbs.See Full Product Description

The combination of unique design and superiorThe combination of unique design and superior quality make this beautiful chair a masterful addition to your home or camp. Multiple layers of weatherproofed spruce wood guarantee maximum stability and safety. The Globo Chair is equipped with a big soft cushion which makes it a real cozy place to spend an afternoon. The fabric of the cushion is Agora from Tuvatextil, a high performance solution dyed acrylic fabric that is weather resistant, U/V resistant and stain resistant. Dimensions: 48 in. L x 30 in. W x 48 in. H, weight: 31 lbs. weight capacity: 260 lbs.See Full Product Description