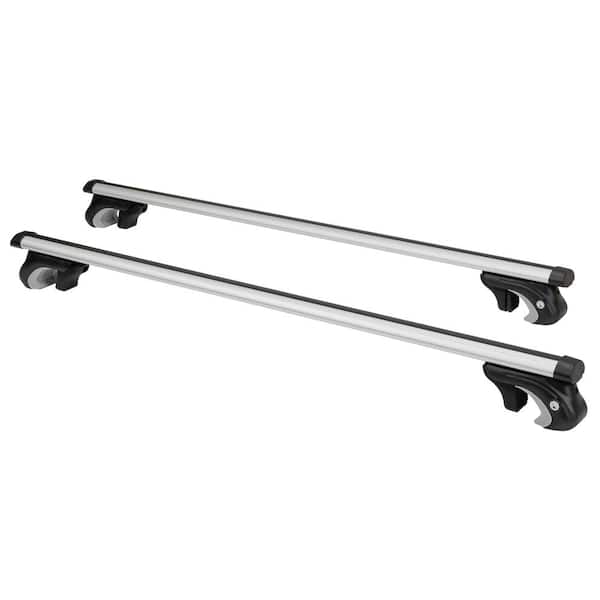 CargoSmart's Universal Cross Bars simply mount to the existing raised side rails of your vehicle to easily expand the carrying capacity. These are a great addition for camping, sporting events, vacation travel or road trips, supporting rooftop baskets, car top bags. and other accessories. The adjustable crossbars free up space inside the vehicle and in the trunk. They are constructed of corrosion-resistant materials to withstand extreme weather conditions. All hardware is included and no tools are required.

CURT roof rack cross bars empower your outdoorCURT roof rack cross bars empower your outdoor adventures by providing convenient, secure roof cargo storage whenever needed. These roof crossbars are easy to install with no tools required and they feature a lightweight aluminum construction for easy handling. CURT roof rack cross bars install quickly and securely with their lightweight, universal design. They come with rubber-coated clamps that fit most car roof side rails and they are adjustable for a maximum span of 50 in. Best of all, they required zero tools for installation. The integrated knobs tighten down onto the rails for solid mounting and they have key-operated locks to help enhance security and deter theft. CURT universal roof rack cross bars are constructed from naturally rust-resistant aluminum to easily outlast the elements. Aluminum is also lightweight for easier handling and installation of the crossbars whenever needed. To further protect the aluminum against corrosion and add a sleek look, the oval OE-style tubes are covered in a durable black powder coat finish. These rooftop crossbars are rated for 150 lbs. to accommodate a variety of kayaks, canoes, rooftop cargo carriers and much more. They also feature rubber strips along the top edge to avoid marring the finish on your kayak or other cargo. CURT roof rack crossbars measure 53-3/8 in. L, 2-1/8 in. W and 7/8 in. H. They stand 2 in. off the car roof side rails when installed. 2 cross bars are included per package.View Full Product Description

2-Piece Adjustable Roof Top Cross Bar Set, for Use with Existing Raised Side Rails Only

Designed for vehicles with existing sideDesigned for vehicles with existing side rails no more than 50 in. apart, these universal fit Apex Aluminum Roof Crossbars clamp onto your rails and tighten in place using large easy-turn knobs. They feature a 150 lbs. weight capacity, perfect for carrying extra luggage and other equipment on your next adventure. The clamps also have a ribbed rubber insert for increased traction and stability during travel. Lightweight and rust-proof, these crossbars are a perfect accessory for your next road trip and can be used with cargo boxes, cargo bags and roof top carriers.View Full Product Description