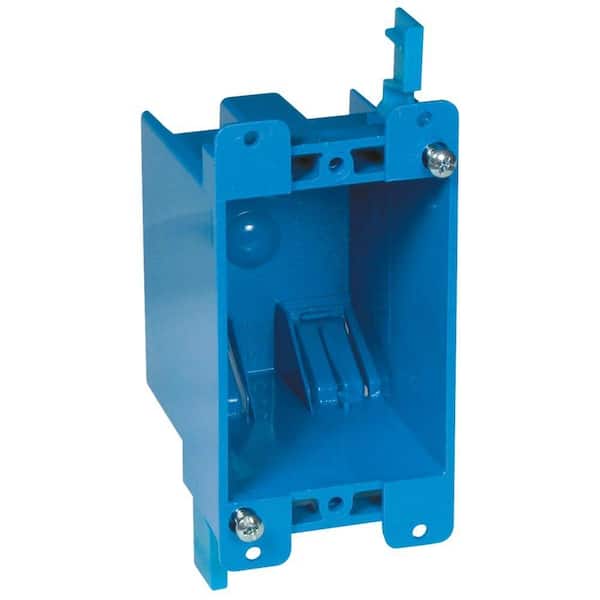 The 14 cu. in. PVC Old Work Electrical Outlet Box is designed to work with non-metallic sheathed cable in accordance with Article 314 of the NEC. This item is great for light commercial and residential applications. The box is crafted with non-conductive PVC for durability and is fire rated and UL Listed to help ensure safety.

7
Filter by:
Showing 1-10 of 268 reviews
Mar 25, 2021
Updating my 1940's home with these
I decided to update some of my outlets and light switches. These old work Carlon boxes were the boxes I decided on. I had to use these because my old home has 1/2 drywall" with about 5/8" plaster on top. The ability to position the fasteners at the length/ depth needed was a simple but genius solution. My only complaint is the amount of wire push throughs. I don't think 4 is entirely necessary. It makes installing a smart outlet or a outlet with built-in surge protection harder as it reduces the amount of space for the wire. All in all I like the piece.
by
Mar 22, 2020
Works as intended
We needed to retrofit a gang box in order to hang up a new light fixture. The light fixture is just under 6 pounds - so under that maximum weight suggested. However, because this was a retrofit job the light fixture didn't sit flush against the wall. It's fine and no one will notice, but it is something to note. Otherwise, it is offered at a great price and works to serve our needs.
by
2 people found this helpful
Jun 19, 2019
Great product, easy to install. This single gang box attaches securely to the wall. There is plen...
Great product, easy to install. This single gang box attaches securely to the wall. There is plenty of room to add a Z-Wave (or similar sized) receptacle with one or two 14/2 Romex/NMD90 cables. I've installed a couple of these now and will be replacing some existing metal device boxes with them to facilitate a more robust Z-Wave mesh network.
by
Sep 1, 2015
Some challenges
This “old work box” can be a handy, affordable solution when you need to quickly install a switch, outlet or thermostat in an existing wall. There are a few challenges the buyer should be aware of. I found the cut out accuracy is very important when using this type box. Recently when my cut out was a little tight and I tighten down on the two diagonally opposing plastic tabs to achieve a secure, firm fit the box warped so it is was no longer flush. I have also had trouble with the plastic tabs braking when over tightened. After I enlarged the cut out the box installed correctly and securely.
by
14 people found this helpful
Oct 17, 2014
Unacceptable Quality
They've cheapened it. The screws that operate the wings are not threaded into the wing far enough, making them almost impossible to use. If enough pressure is placed against the screw to keep the screwdriver from slipping, the stops at the front edge of the box collapse and the box disappears into the wall. To use it you have to run the screws in, first, to cut threads, while holding the box in your hand, an almost impossible job. This box used to work. Now a standard box, used with Madison bars is faster and easier. They saved a fraction of a cent and cost me several dollars worth of time if I try to use it. Not cost effective
by
38 people found this helpful
Jan 18, 2022
by
Jan 13, 2022
by
Jan 6, 2022
by
Dec 29, 2021
by
Dec 28, 2021
by
Showing 1-10 of 268 reviews

The Carlon Zip Box Blue 1-Gang 22 cu. in.The Carlon Zip Box Blue 1-Gang 22 cu. in. Non-Metallic Switch and Outlet Box is designed for use with non-metallic sheathed cable in accordance with Article 314 of the National Electric Code. Great for residential and light commercial applications, the box is made with PVC, is listed for use with masonry walls and can be used with 90 degree C conductors. It meets NEMA OS-2 and is fire rated and UL Listed for safety.See Full Product Description

The 1-Gang Non-Metallic New Work Box withThe 1-Gang Non-Metallic New Work Box with Bracket is great for residential and light commercial applications. It is made with PVC and works with non-metallic sheathed cable in accordance with Article 314 of the NEC. The box can mount to steel and wooden studs and is suitable for masonry walls.See Full Product Description