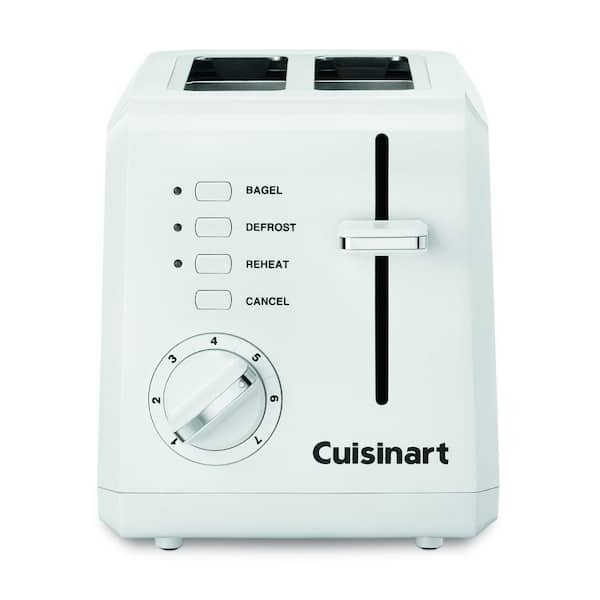 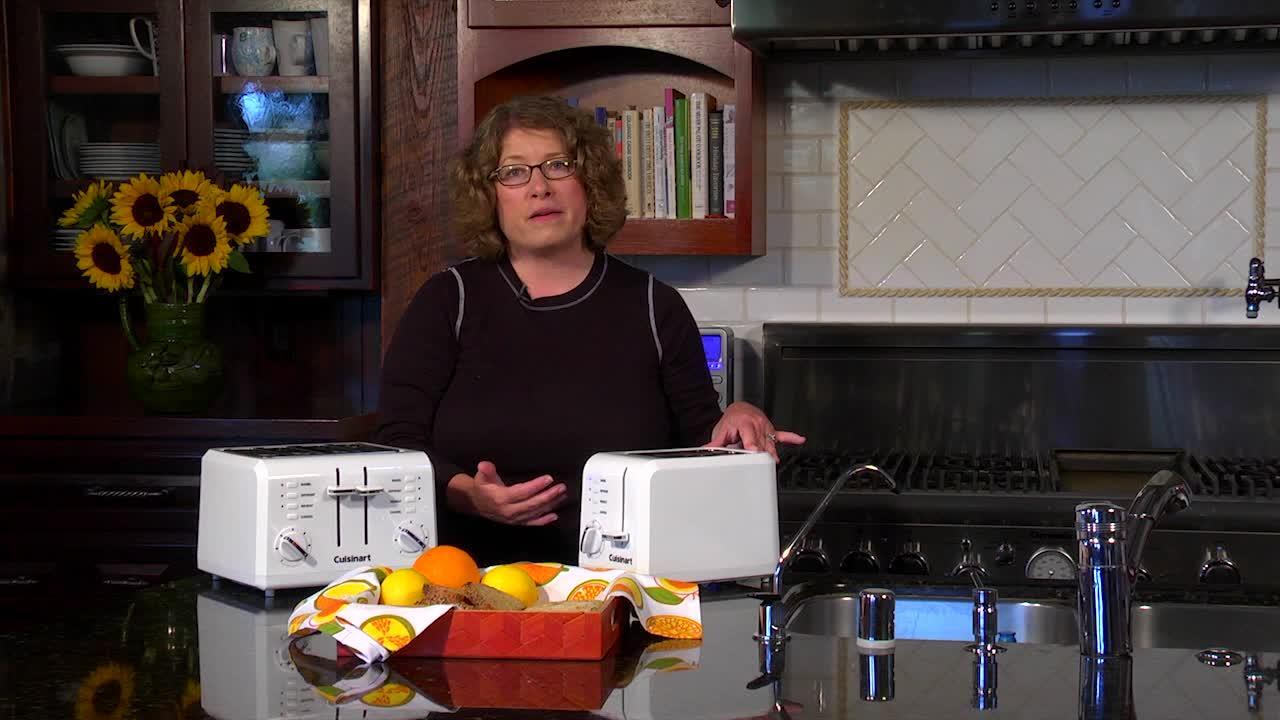 The classic toaster gets a modern update with the Compact Plastic Toaster by Cuisinart. It saves space whether placed sideways or facing forward, to fit any kitchen counter. Whether making thick bagel halves or thin sliced breads, the wide slots, high-lift carriage and custom controls ensure even, precise and convenient toasting every time.

53
Filter by:
Showing 1-10 of 768 reviews
Dec 30, 2021
good for the price
after having this toaster, I have come to realize that it needs a cleaning about once a month. Not just emptying the bottom tray, but inside where the wires are. I used a soft toothbrush and a can of compressed air. That really helped a lot. Now it seems that the toast comes out almost perfectly toasted all around. I do like the controls for different food stuff to be able to get roasted or just unfrozen. I am one that likes to have a heat control button or slider to have clicks for setting the heat. This one does not. So, I have marked the settings for each piece of bread or waffle or bagel with a sharpie marker. The cord can be shortened by flipping to the bottom and looking at the area where there are some half hooks in the frame. I have not figured out what that hook is for that is off to the side. I would like to think it has to do with the plug, but nothing I have tired will work in that regard. The one thing about the toast or whatever you put in it, the mechanism that controls the spring release to bring it back up, seems short or shortened over time. It just doesn't raise the toast high enough to pick it out, without using the push down lever to raise it up enough to be able to use your fingers. At least with my bread. I have used a bagel and waffle in it, and the bagel has stuck, because the hole or slots are not wide enough. So, for me it does okay now that I have started to take better care of it.
by

Customer review from cuisinart.com
Dec 20, 2021
Looks nice, sub-standard toast
Poor toasting, could not get a decent piece of toast at any setting.
by

Customer review from cuisinart.com
Dec 14, 2021
Excellent
This is the best toaster we’ve ever owned, I love the deep baskets wide slots. Very easy to get any item that your toasting out of bed with ease.
by

Customer review from cuisinart.com
Jun 16, 2021
Decent toaster
Decent toaster that does the trick. I needed something smaller to take up less counter space, so this waw good.
by

Customer review from cuisinart.com
Nov 16, 2020
Works great and small design
So far works great, size is perfect for my small kitchen. I usually eat bread that comes frozen so I use the defrost function quite often.
by

Customer review from cuisinart.com
Sep 20, 2020
Just the right toaster
This is the perfect toaster for my small kitchen. It amply fits bagels or English muffins and is quite stylish. I chose white to match my appliances.
by

Customer review from cuisinart.com
Sep 5, 2020
Buy it.
This toasts fast, is great for bagels and looks good on the counter.
by

Customer review from cuisinart.com
Sep 5, 2020
Perfect for Me!
Basic toaster, does what it’s supposed to do and does it well. Big enough to handle a good-sized sliced bagel. Doesn’t take up much space and easy to clean.
by

Customer review from cuisinart.com
Jul 3, 2020
Cuisinart toaster
Can’t be happier I love my toaster especially the settings
by

Customer review from cuisinart.com
Jun 28, 2020
Cheap toaster ...too expensive
1. Bagel setting is useless. It extends time and does not shut off one side. 2. Heater grids, while evenly spaced, don't toast evenly. A number of wire sections look like they were manually lifted away from the surface. These get hotter. 3. Even if toasting the same bread everyday you have to watch to prevent burnt toast. 4. The extra lift spring tension is too much and is able to lift the toaster off the counter before the bread gets lifted to the top. 5. I would give it five stars just for looks and design.
by

The classic toaster gets a modern updateThe classic toaster gets a modern update with the Compact Plastic Toaster by Cuisinart. It saves space, whether placed sideways or facing forward, to fit any kitchen counter. Toasts two thick bagel halves and two thin slices of bread at once. Dual custom controls, wide slots and high-lift carriage ensure even, precise and convenient toasting, every time.View Full Product Description

With 6-shade settings the Cuisinart 2-SliceWith 6-shade settings the Cuisinart 2-Slice Metal Classic Toaster makes breakfast just the way you like it. The smooth brushed stainless steel housing with polished chrome and black accents looks sleek in any kitchen and toasts anything the way you love. Use the custom controls to defrost and toast bagels, bread and pastries to perfection.View Full Product Description

KitchenAid's KMT2115 2-Slice Toaster hasKitchenAid's KMT2115 2-Slice Toaster has chrome buttons that glow with blue back-light illumination when in use. The extra-wide slots will accept the thickest bagels, breads, or pastries and the extra-deep, steel toasting cavity ensures even browning. The racks automatically adjust the slot width for thick or thin slices, keeping food upright for even toasting. When your food is ready, the manual high lift lever makes it easy to get it out of the toaster. Selecting the bagel toasting function reduces the power on one side of the heating elements by 50% to produce a better toasted bagel. Plus, the adjustable 5-shade setting ensures your food will pop up just the way you like it.View Full Product Description