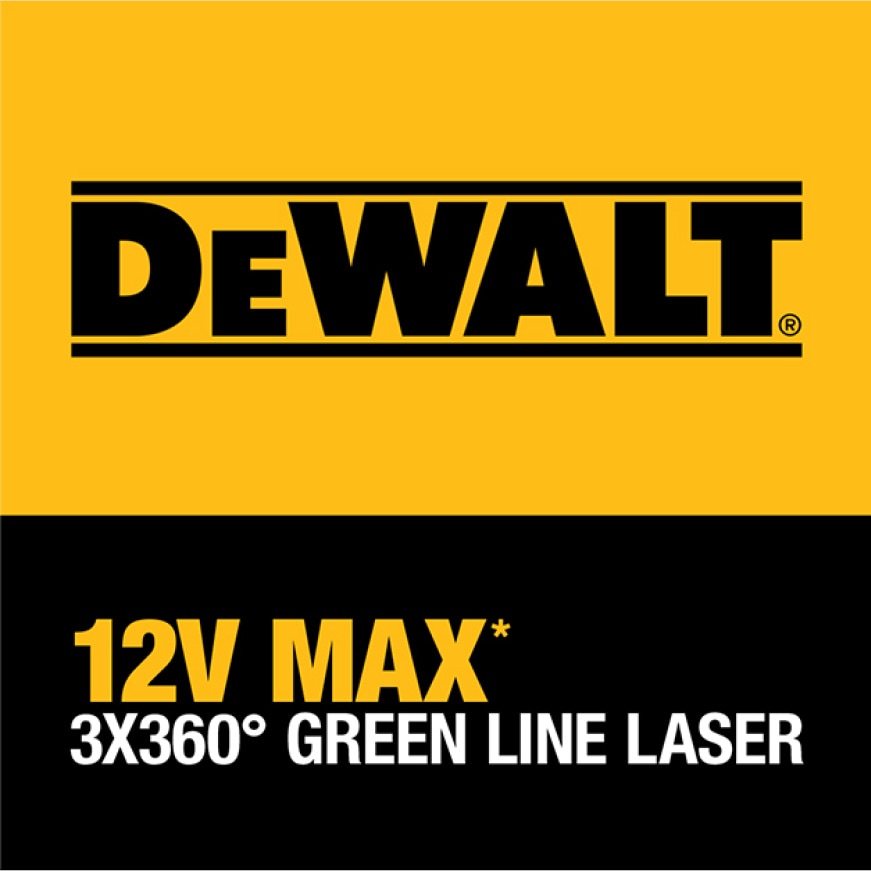 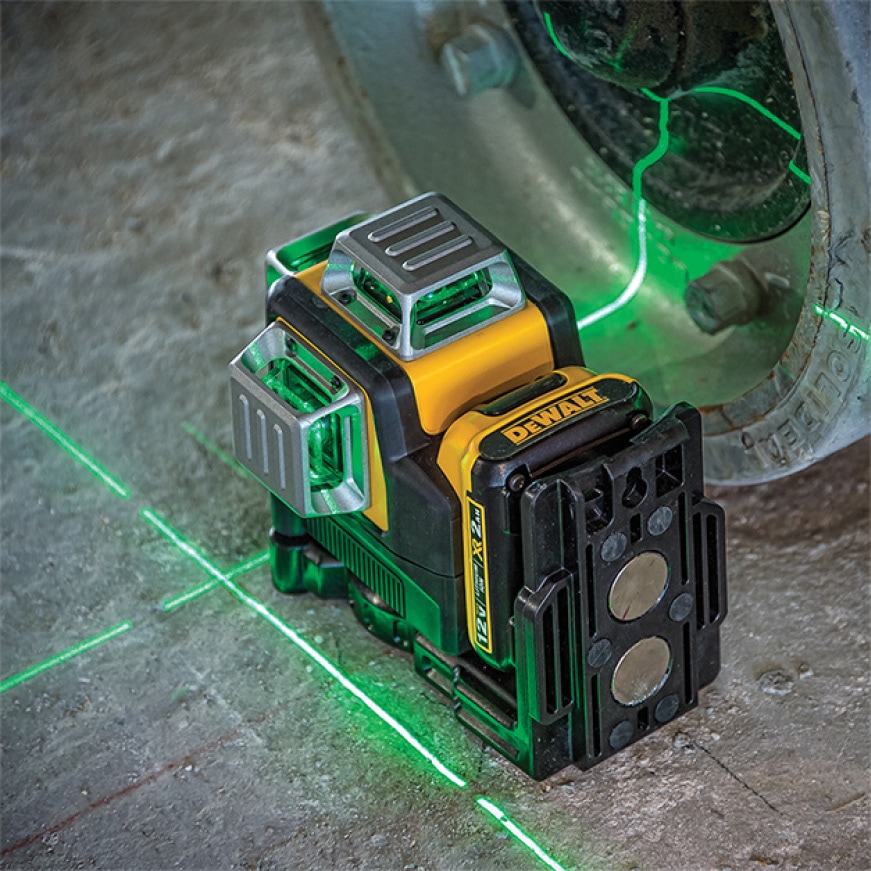 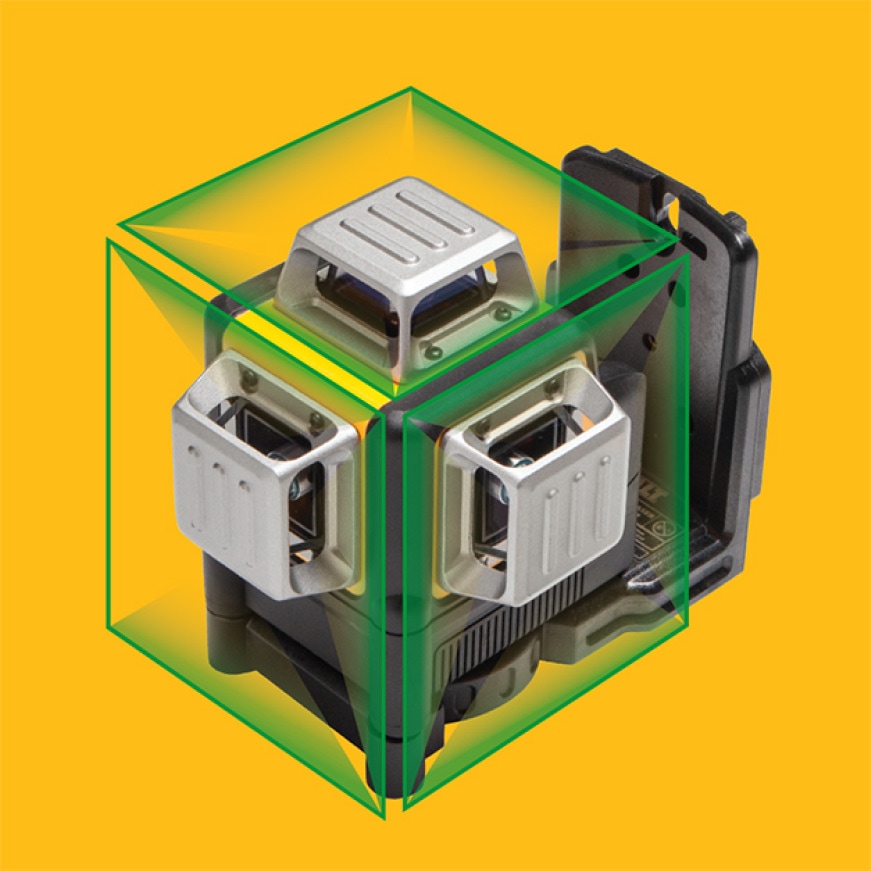 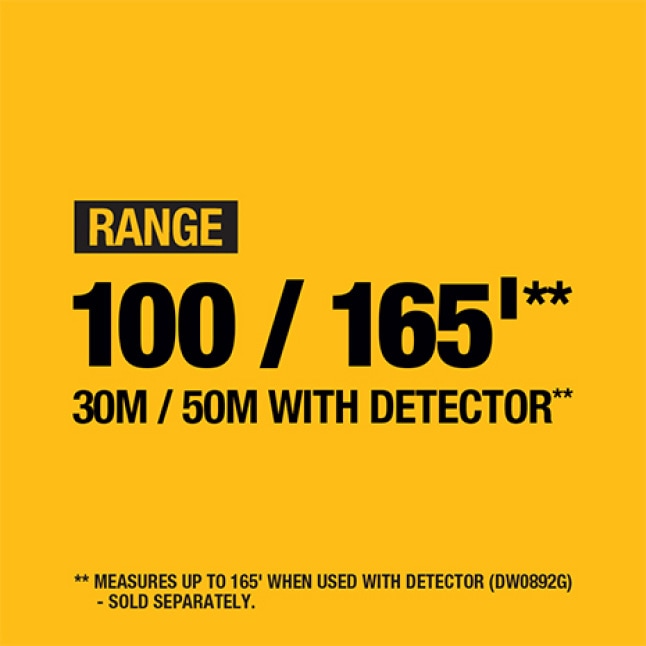 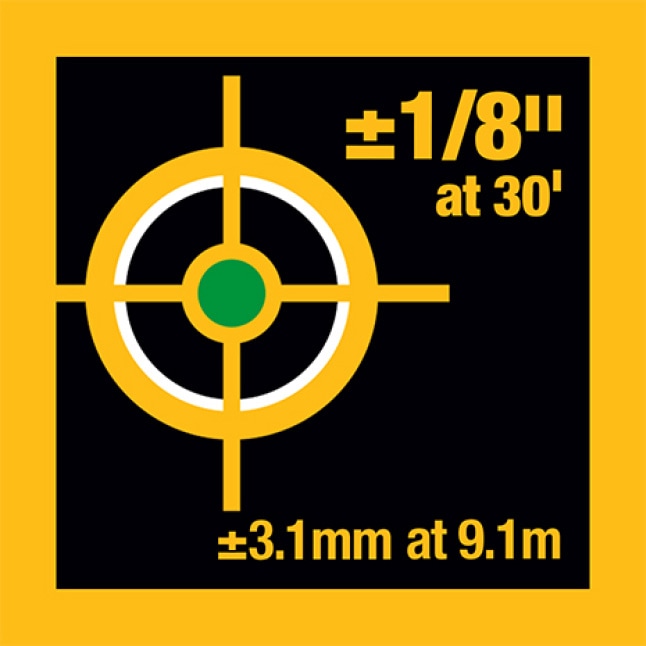 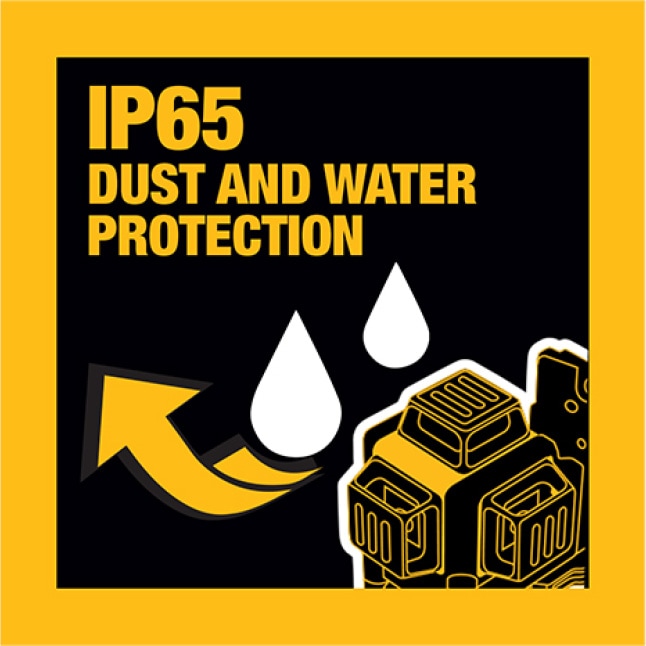 With an IP65 rating, this laser is dust and water resistant. 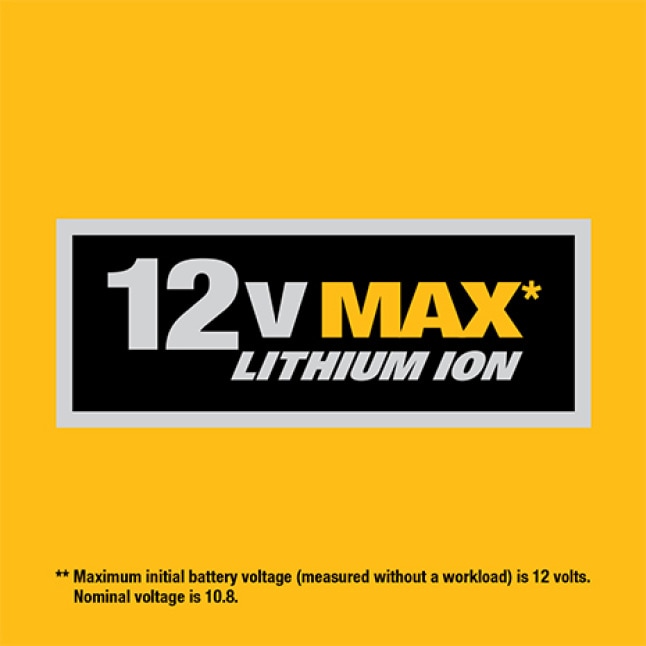 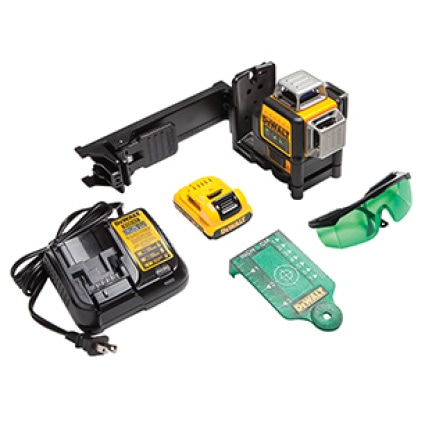 Laser is housed in a durable case and comes with a variety of accessories. 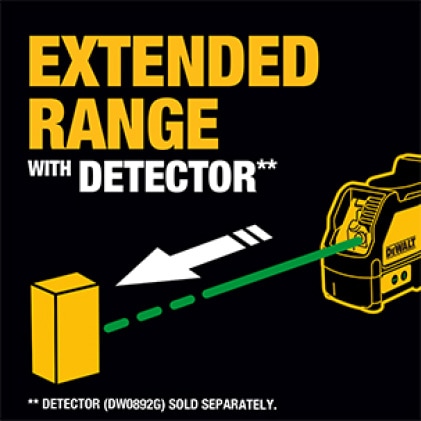 With a detector (sold separately), extend the range of this laser to 165 ft. 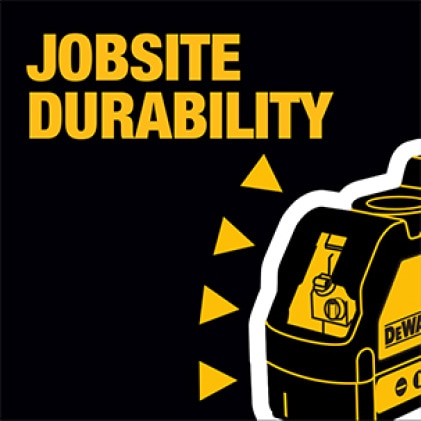 Designed for demanding worksite environments with an over molded case. 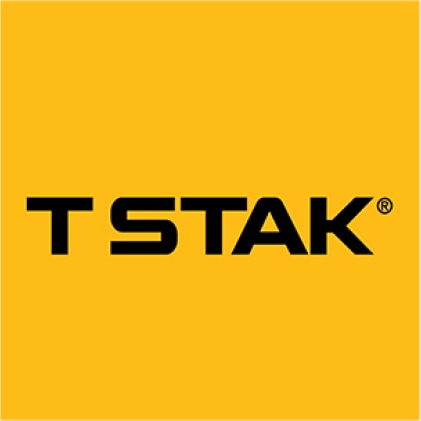 Laser is housed in a durable TSTAK Compatible carrying case. 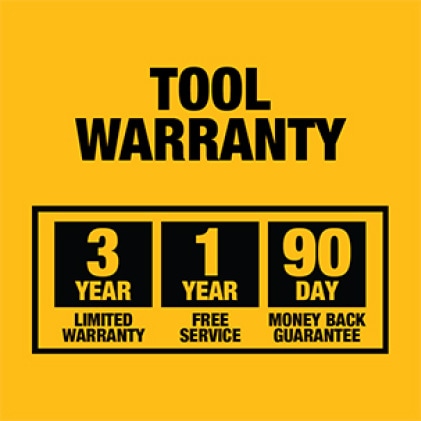 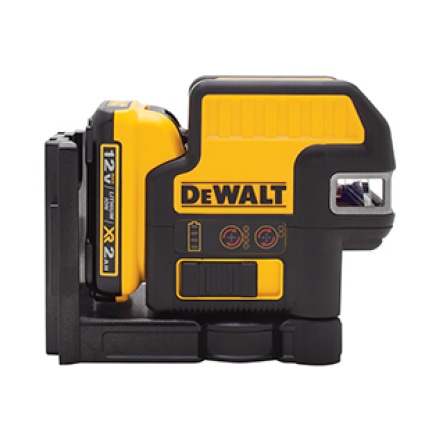 With an IP65 rating, this laser is dust and water resistant.

Laser is housed in a durable case and comes with a variety of accessories.

With a detector (sold separately), extend the range of this laser to 165 ft.

Designed for demanding worksite environments with an over molded case.

Laser is housed in a durable TSTAK Compatible carrying case.

Will a 5ah battery fit in this laser? Looks like there may not be enough room between the battery slot

Keep in mind this is a 12v battery not a more common 18/20v max battery. I've never seen a 5ah 12v battery from dewalt. You are correct that it is tight, but the laser swivels so larger battery would work. Take a look at the attached video where I go over all the features of this laser and compare it to another. Might be helpful.

Is this bright enough to be used outdoors in bright sunlight?

The DW089LG-QU is recommended for indoor use.

can this laser use a 20 volt battery?

No. It is designed specifically for the 12V battery. I recommend buying the kit and ordering a 2nd 12V battery unless you find the kit with 2 in it. The charger will charge both 12V and 20V batteries however.

I want to lay tile using this laser guide, how can i tell if my starting line is straight? Is th...

Want it for multiple projects

What detector is suggested for use with this laser lever?

The DW0892G is the recommended detector.

Is there a manual mode? Where you can lock the pendulum while using. If you wanted to get a line that wasn't level.

No, there is not a manual mode. The Pendulum Lock switch should always be placed in the LOCKED/OFF position when the laser is not in use.

12
Filter by:
Showing 1-10 of 375 reviews
Jan 20, 2021
Could not complete my DIY Project without it
With a help of a buddy of mine, I decided to take on the task of setting up acoustic sound panels for my home studio rather than hire professional help. I purchased the 3 beam 360 Laser level to serve as the guide for the placement of the panels. Upon opening the DeWalt laser level case, it was very quick to grasp how to best utilize this leveling device. Check out the photos I am posting to see how I was able to use the laser to keep the Acoustic panels to look symmetrical from the front wall to the back wall, ceiling and the left and right wall. By having the multiple laser option helped me tremulously by making sure I able to keep the panels parallel to the front wall and left to right. Beside using this laser level for my studio build, this laser level has helped on another DIY tasks. I have been able to set up two adjacent curtains rods on a large entry door and window and set up shelves on walls as a decor. I plan to use a laser level for every DIY project that might come up. Now was this product isn’t 100% effective I would say there is some patience needed when working with setting up the laser level. Part of my complain has to do with the Tri Pod that I got with the device. I wish I could make micro adjustments from the laser level rather than try to move the tri pod which would far pass the mark I was so close to lining up to. To get the perfect set up of the laser meant tape measuring the room, setting the laser lever, measuring and making adjustments constantly. A lot of time can be wasted if you are trying to get absolute perfection if you need to laser lever to specific points. In Summary by having this laser lever it has helped take out the guessing work on eye balling if items are leveled. I was able to get a professional looking studio with no crooked lines or odd gaps thanks to this DeWalt Laser Level. When you are looking at the value of this device might be a pricey laser level but the fact you are getting the 360 3 beam laser lever is worth every penny. Being able to measure on a X, Y & Z Plane make sure that you are balanced to the room, sure it will take time to measure that you are correct but trust me your visible eye will take you. Every time I walk into my home studio, I am beyond impressed with how the set-up of the acoustic panels came out to be.
by GG26

Customer review from dewalt.com
Jul 6, 2017
awesome
Just perfect laser i love it easy to use and really good bright color
by chispa
Feb 19, 2017
Great 3 beam laser level
This 3 beam laser level is excellent, and is a great choice if you want to save time and avoid hassles while doing precise work. It's very simple and intuitive to use, with 3 separate buttons to turn each of the three 360 beams on or off separately. The laser level is very solid and rugged, with metal housing around each of the lasers and rubber overmolding on the laser body. The 12V Max Li-Ion battery and charger is included, along with the green laser glasses, green laser card, and a large heavy duty mounting bracket for use with the strong magnets in the base of the level. It has both The green laser is very bright and crisp and is very visible indoors. The longest test I was able setup indoors was 40 feet, and the beam was bright and easily visible. The specs say that the green laser is visible for up to 100 feet indoors, versus 50 feet for the similar DeWalt red laser levels. The auto leveling pendulum design is excellent and it stabilizes quickly if the level is moved or bumped. However, in my testing outdoors of this green laser model next to the DeWalt DR088LR red laser level, my impression is that the green laser isn't necessarily more visible outdoors than the red laser (see video). When working outdoors with either the red or green lasers at more than 15-20 feet, you will need the glasses and/or the laser card to find the beams and position them accurately. Past 25 feet outdoors, you will probably need the separate laser detector. I found the biggest advantage of this model over the less expensive models, such as the DW088LR, is the 360 beams. The benefit of 360 degree beams is that you have much more flexibility in terms of placement. If you need a horizontal beam, you can place this laser level nearly anywhere in a room without having to reposition to get coverage across multiple walls. With the non-360 lasers, you are often limited to a 120 degree beam, or less, on the horizontal beam, requiring you to place the level far enough away from a wall or reposition it if you are doing a project across multiple walls. It has both 1/4" and 5/8" threads on the bottom of the base for tripod mounting. If you have the budget for this 3-beam green laser model, it's fantastic. If you don't absolutely need 3 beams or don't need to have the additional range of the green lasers, DeWalt makes both a 3 beam red laser model (DW089LR) and also 2 beam red and green models (DW0811LR and DW0811LG).
by L111

The Bosch GLL3-300, 360 3-Plane LevelingThe Bosch GLL3-300, 360 3-Plane Leveling and Alignment Line Laser provides an all-in-one level and alignment solution. With 3 chalk lines in 360 laser planes 1 horizontal and 2 vertical this leveling laser delivers fast job setup from 1 initial point. The lasers 2 vertical lines cross at 90 angles to quickly square the layout of a room. Featuring an upgraded diode with a brighter beam, the GLL3-300 has a visible range of up to 200 ft. Dia, and a working range of up to 300 ft. Dia with an optional receiver. This laser includes VisiMax Technology for maximum line visibility.See Full Product Description

The Topcon RL-H5A Self-Leveling Rotary LaserThe Topcon RL-H5A Self-Leveling Rotary Laser 1021200-07 is accurate 1/16 in. at 100 ft., a range of up to 2,600 ft. and leveling within 5. Its slope matching feature makes it an excellent tool for excavating. This self-leveling laser rotates at 600 RPM in full gear. If it is knocked out of position, it automatically re-levels itself with an outstanding accuracy of plus/minus 10 arc seconds in angular measurements. The included laser receiver extends the range of this level to its full working range. It is durable enough to withstand drops and is both water and dust proof. The alkaline batteries provide up to 100-hours of continuous use and it automatically shuts off after 30-minutes of non-use. There is a low battery indicator and an out-of level alert that works on the 2-way communication system. It has fine and normal accuracy options and 2 LCD displays 1 on the front, the other on the rear. Plus it comes with the 4 dry cell alkaline batteries and a rod clamp. Topcons RL-H5A has convenient features like slope matching and high speed rotations. The new dual handle design makes this horizontal level easy to maneuver. It is weather-resist, being both dust-proof and resistant to water jets. The Topcon rotary laser also comes with batteries, a carrying case, user manual and a 5-years limited warranty. Laser product below 5mW and class II.See Full Product Description

Take on your tough jobs with the DW089LGTake on your tough jobs with the DW089LG 12-Volt Green Cross Line Laser. It has a 12-Volt Lithium-Ion rechargeable power tool battery platform and green beam laser technology. It is resistant to water and debris, thanks to the over-molded housing and IP65. Kit includes Blow Mold Case, Extended Ceiling Bracket, 12-Volt Battery, Charger and Green 3 x 360° Line Laser. For a limited time get a bonus TOUGHSYSTEM 22 in. Tool Box with purchase.See Full Product Description

The Hilti PM 30 Multi-line laser with 3 greenThe Hilti PM 30 Multi-line laser with 3 green 360 lines is ideal for plumbing, leveling, aligning and squaring. Powered by a rechargeable 12-Volt lithium-Ion battery, this laser allows up to 1.5-days of continuous layout work. The product is self-leveling to within typically approximately. 4.0 in all directions. Self-leveling time is about 3-seconds. Applications include setting out drywall tracks on floors, walls, ceiling and transferring reference heights.See Full Product Description