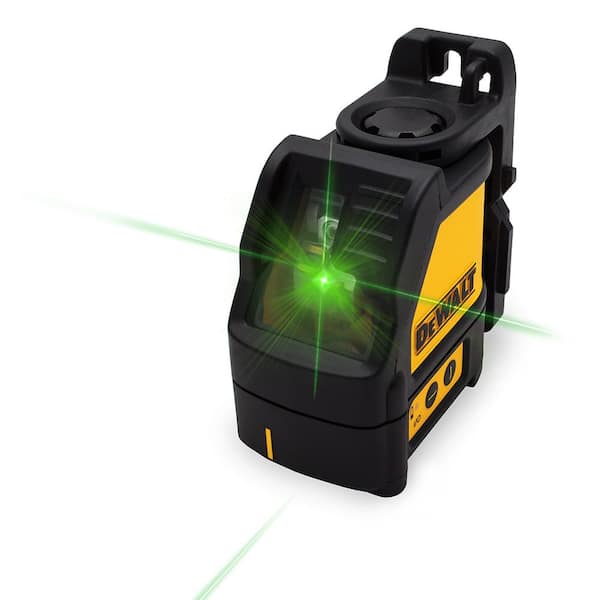 The DW088CG Cross Line Laser is a green beam model of our existing DW088K laser. This unit has a great range that projects bright crossing horizontal and vertical lines. Ideal for various leveling and layout applications.

33
Filter by:
Showing 1-10 of 434 reviews
Jan 7, 2022
This laser broke after 2 months of using.
I purchased this laser 2 month ago, use maybe 10-15 times, today it’s just stop working. I won’t recommended those product to anyone specially it’s freaking expensive to brake in 2 months.
by
Response from DewaltProductExpertMar 3, 2022
Hello Audrey
Thank you for leaving your feedback from your experience with DW088CG-QU. I am sorry to hear that you’re having issues with your unit after such a short amount of time. I’d like the chance to speak with you about this problem and your warranty. If you are interested in speaking with me I can be reached by email at wecare@sbdinc.com. Please also reference ticket # 3943469. Hope to hear from you soon!
Thank you
DEWALT
Jul 3, 2021
Nice laser
It is great for indoors. I have never used it outdoors yet, but even inside in a bright room it can be hard to see the line. The only thing I wish it had was a turret lock. Other than that it is a great indoor laser for any tile, cabinetry, ect. Work.
by

Customer review from homedepot.ca
May 13, 2021
Well thought out with multiple uses
[This review was collected as part of a promotion.] Received this Laser level a few weeks ago. Very well thought out tool/packaging. One of the nice thing is the hard case and the battery storage area built into the case. Convenient to carry spare batteries or if you're and infrequent user, a reminder to remove the batteries for long term storage. The self leveling feature takes the guess work out of setup. The green laser is bright enough to be seen in daylight. Good product and worth the price.
by

Customer review from dewalt.com
Apr 28, 2021
Very visible and accurate
[This review was collected as part of a promotion.] Got this laser level to use in comparison with the one I was previously using (a different brand) on job sites. I am partially color blind and had a very hard time seeing the red laser line with the other set up past 5-6 ft. from the unit. I was pleasantly surprised when I turned this unit on and could see the vibrant green line the entire way around the room. When it comes to using the unit, there are lots of positives. The mounting bracket, although mostly plastic, is very sturdy in its construction. The pivot bracket is also sturdy and I found no deviation when rotating the unit side to side, when mounted. The magnets are strong and hold the unit in place without sliding. I liked the fact that there is a stop point on the mounting bracket to which you can set the pivot bracket to with consistency. It’s gives the user the ability to remove the unit from the mounting bracket, use it else where, and then put it back and not have to worry about readjusting it. Unit is extremely accurate. I do high end custom cabinetry and generally work to 1/32” of an inch when building and installing (try to work by the saying “aim small, miss small”) so accuracy is key. Over the distance of 22’ ,from unit to wall, I was able to figure out that there was just under 1/32” deviation. Cons One thing that I wish this unit had was a field of view that was slightly past 180*. There was a point during initial setup on a job that I had to reset the laser due to it not being able to cover all needed areas at once. Another thing I can see potentially becoming an issue with consistent use is the screw holes on the mounting bracket. Due to the bracket being plastic, there may be a chance to wear through those hole over time. Overall this is a sturdy, well built accurate unit that is very easy to calibrate and use as long as you take the time to do it properly.
by

Customer review from dewalt.com
Apr 24, 2021
Soooo much better than my red laser level
[This review was collected as part of a promotion.] I've have now retired my old red laser level after using this DeWalt green laser level. The difference is night and day! I can see this in the day time easily unlike my red laser level that I couldn't see beyond a few feet during the day. The green laser lights are very bright. I like being able to choose to have just a vertical line, horizontal line or both. There are two very strong magnets on the built in swivel so you can attach it to a metal surface and swivel it in the direction that you need it to project a level or plumb line. The built in swivel also has a hole so you can hang the level from a screw, nail or hook. It shines a crisp clear line on a variety of surfaces and finishes. The included hanging mount for attaching to a drop ceiling grid is a nice touch. It has a solid, quality feel and I can tell that this will last me for many years and projects to come.
by

Customer review from dewalt.com
Apr 23, 2021
Easy, Simple, & Great!
[This review was collected as part of a promotion.] The day the laser arrived it was it to use! The instructions to get it set up were easily understood and made the process a breeze! My favorite feature is the fact that if the laser become uneven at any point, the beam will flash and continue to flash until it is made even again!
by

Customer review from dewalt.com
Apr 19, 2021
DeWalt 165’ Cross Line Laser Level
[This review was collected as part of a promotion.] My first project I was able to use this on was to install shiplap in my basement. It worked extremely well and helped me carry straight lines for a total run of 30 feet. It was very easy to use and set up. The lines are extremely easy to see and the accuracy is great. This is a product that you don’t think you’ll need or use until you actually use it. I didn’t have to mark lines on the wall, use a level or chalk line. So much easier and plan on using it for a few upcoming tile projects to get everything exactly where it needs to go. Love this tool.
by

Customer review from dewalt.com
Apr 17, 2021
Pictures speak for themselves. The best!
[This review was collected as part of a promotion.] I used my Dewalt green cross line laser on film set I recently worked on. The laser line was clear, crisp and visible under the bright studio lights all the way past the 75 foot hallway. You can attach it to any metal surface via magnets, screw it to any wood surface or use the mounting bracket to attach it to the ceiling. The carrying case also accommodates the 3 AA batteries that are included. Easy to use, well designed and quality manufacturing.
by

Customer review from dewalt.com
Apr 15, 2021
Very Necessary
[This review was collected as part of a promotion.] I received this tool in the mail a couple of days ago. So far upon using it, it is very handy. It’s one of those you don’t know what you are missing. I do home remodeling all the way up to roofing. You can level a door, or door trim, you can plumb a post, after reading a little the usefulness of this product far outweigh cost!
by

The DEWALT Self Leveling Cross Line and PlumbThe DEWALT Self Leveling Cross Line and Plumb Spots Laser Level projects two bright, self-leveling horizontal and vertical beams to provide accurate plumb point transfer. Down-beam projection with raised clearance provides laser-dot visibility and alignment for wall track layout. The beams have an indoor visibility of 100 ft. The range of this handy leveling instrument can be extended to 165 ft. with a separately sold DEWALT laser detector. It's designed to withstand hazardous job site conditions thanks to an overmolded housing that protects the unit from precipitation and construction debris.View Full Product Description

The DEWALT (R) Green Cross Line Laser LevelThe DEWALT (R) Green Cross Line Laser Level is great for various applications from framing a house or remodeling jobs. The locking pendulum and over mold housing allows for drop protection which is a major concern on most jobsites. The magnetic bracket and hang hole allow for various mounting options.View Full Product Description

The MILWAUKEE M12 Green Cross Line and PlumbThe MILWAUKEE M12 Green Cross Line and Plumb Points Laser provides users with all day runtime and best visibility in its class. Get 15+ hours of continuous runtime with an M12 REDLITHIUM 3.0 CP Battery (sold separately) for ultimate productivity. The high-intensity green laser offers users superior visibility up to 125 ft. for long-range applications. The vertical and horizontal lines make alignment and level applications easy, while the two plumb dots allow for quick transfers from floor to ceiling. The integrated magnetic bracket features micro control and pivots on the plumb point for easy and fast alignment. The amplified rare earth magnets provide a strong hold and will not slide on steel studs, while an integrated hang hole makes setup easy and efficient in any environment. As part of the industry-leading M12 System, the Milwaukee M12 Cross Line and Plumb Points Laser Level is compatible with all M12 Batteries. The M12 Cross Line and Plumb Points Laser Level is a tool only and does not include a battery, charger, or case.View Full Product Description

The Bosch GLL3-300G 360° Three-Plane LevelingThe Bosch GLL3-300G 360° Three-Plane Leveling and Alignment-Line Laser features an all-in-one level and alignment solution. This leveling laser provides fast one-spot job setup. It allows users level, align, square and plumb with one setup point by generating three 360° laser planes - one horizontal and two vertical. It uses green-beam technology, which generates lines up to 4X brighter than standard red beams. The GLL3-300G has a visible range of up to 200 Ft. diameter. The leveling laser features pulse mode, extending the working range up to 300 Ft. diameter and/or in bright lighting, using the optional LR8 receiver. The VisiMax Technology drives maximum line visibility. The included BM1 positioning device mounts to magnetic surfaces, stands on floor with retractable feet and mounts to drywall or wood. It has a microfine height-adjustment system, which provides quick adjustment and secure locking of the working height.View Full Product Description