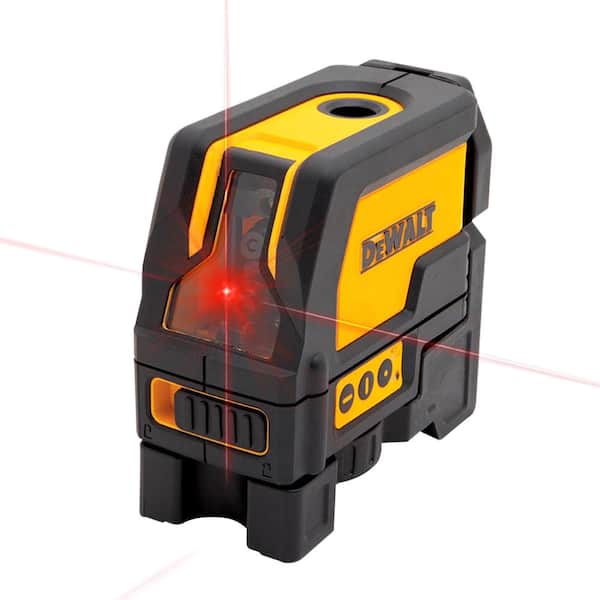 The DEWALT Self Leveling Cross Line and Plumb Spots Laser Level projects two bright, self-leveling horizontal and vertical beams to provide accurate plumb point transfer. Down-beam projection with raised clearance provides laser-dot visibility and alignment for wall track layout. The beams have an indoor visibility of 100 ft. The range of this handy leveling instrument can be extended to 165 ft. with a separately sold DEWALT laser detector. It's designed to withstand hazardous job site conditions thanks to an overmolded housing that protects the unit from precipitation and construction debris.

9
Filter by:
Showing 1-10 of 108 reviews
Dec 26, 2017
Does exactly what it's supposed to do
Does exactly what it's supposed to do
by
1 found this review helpful
Jan 3, 2016
Dad thought it was pretty neat. For the tool collector though.
I used this twice for its purpose and many times to check level on many different occasions. I played with it to learn it and had plans to go and help my Dad at his hunting camp in a week. I figured what we needed was a piece of angle steel 4 feet and quick clamps so I could clamp angle steel to the ladder then attach this level using the powerful magnets on the back of the base. I duct taped the angle steel where needed so I wouldn’t scuff my laser level and actually it helped it to slide the level up and down easier too. If the floor was being walked on IT WOULD SHAKE the red laser line. I had forgotten the camera, so a month later I returned to help and took pictures of what I used the level for. I used both vertical and horizontal at the same time to set frames for windows that we put in the 2x4 walls. The only bother was getting in the way of the line (have to remember it’s there) and the laser line itself kind of hard to compare to a pencil line but for the rough opening work, it was perfect and it doesn’t replace a true frame level though. The batteries lasted for a long time there and other places and still has the same batteries it came with. This is truly for a rough job level or for big items like ducts, conduit and frame work. I used this to level a tie plate support for a wall that was tipping out on a block garage in the day light too, line wasn’t as pronounced but I saw it well enough. I couldn’t see a tripod working well unless you do only waist high work all the time, no you can’t just set it up and keep swiveling it to move the lines unless everything is perfect plumb and square, you will have to move this around with you. In other words if your wall is tipped in or out at any point and you want to draw lines down just by setting up the level and swiveling it to move laser line, where ever the walls are tipped in or out, you will not have square lines to follow. The 1.5” angle steel I used actually was rusty dirty and bulky but if it was replaced with a like item clean and new it would be great. Battery compartment is ridiculous to open with my fingers and fear breaking it with a small screwdriver to open, I am not a fan of leaving batteries in anything and the case that this stores in has holes that you can push three batteries into and hold them. This unit should have a warning to make you lock the unit before travel, there is a lock that holds the internal laser component’s from being knocked around, if you remember. DO NOT LEAVE YOUR LEVEL AND PLUMB BOB HOME. 4 stars and a bit pricey.
by
2 found this review helpful
Apr 1, 2015
Great product
This level takes making sure your lines are plumb and level easy. It comes in a sturdy case with the correct batteries. The ability to lock the self leveling feature keeps the internal components from getting damaged accidentally while being stored or transported. It is threaded so that it can be mounted on a tripod, but it also has magnets on the back so that it can be easily held on a metal track. Awesome product!
by
6 found this review helpful
Jun 30, 2022
by
May 16, 2022
Works well in the unlocked position. Laser is bright. Heavy...
Works well in the unlocked position. Laser is bright. Heavy duty construction
by
Mar 10, 2022
all in one
plumb or level. this is perfect for the job. bright red line also and long battery life
by
Mar 9, 2022
by
Feb 5, 2022
by
Jan 18, 2022
Gets the job done! Can’t complain...
Gets the job done! Can’t complain
by
Nov 18, 2021
The only thing was the battery plate bot good...
The only thing was the battery plate bot good
by
Showing 1-10 of 108 reviews

Take on your tough jobs with the DW089LGTake on your tough jobs with the DW089LG 12-Volt Green Cross Line Laser. It has a 12-Volt Lithium-Ion rechargeable power tool battery platform and green beam laser technology. It is resistant to water and debris, thanks to the over-molded housing and IP65. Kit includes Blow Mold Case, Extended Ceiling Bracket, 12-Volt Battery, Charger and Green 3 x 360 Line Laser.View Full Product Description

The MILWAUKEE M12 Green Cross Line and PlumbThe MILWAUKEE M12 Green Cross Line and Plumb Points Laser provides users with all day runtime and best visibility in its class. Get 15+ hours of continuous runtime with an M12 REDLITHIUM 3.0 CP Battery (sold separately) for ultimate productivity. The high-intensity green laser offers users superior visibility up to 125 ft. for long-range applications. The vertical and horizontal lines make alignment and level applications easy, while the two plumb dots allow for quick transfers from floor to ceiling. The integrated magnetic bracket features micro control and pivots on the plumb point for easy and fast alignment. The amplified rare earth magnets provide a strong hold and will not slide on steel studs, while an integrated hang hole makes setup easy and efficient in any environment. As part of the industry-leading M12 System, the Milwaukee M12 Cross Line and Plumb Points Laser Level is compatible with all M12 Batteries. The M12 Cross Line and Plumb Points Laser Level is a tool only and does not include a battery, charger, or case.View Full Product Description