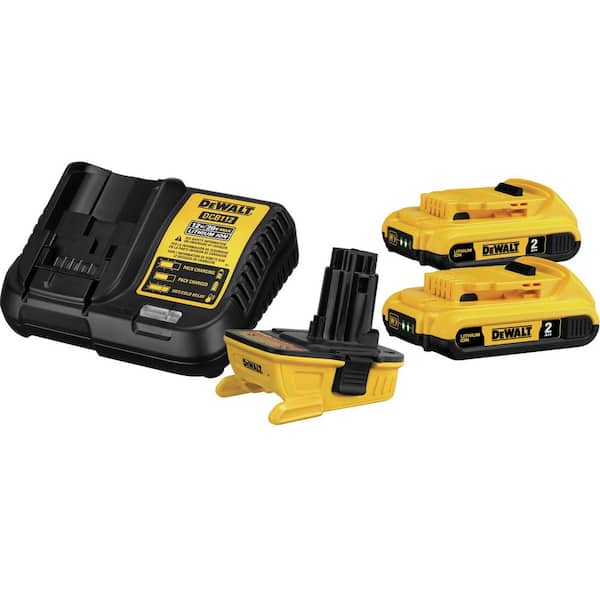 Add versatility to your toolbox with the DEWALT DCA2203C 20-Volt MAX to 18-Volt battery adapter kit. This adapter allows you to use selected DEWALT 20-Volt MAX lithium-ion slide pack batteries with DEWALT 18-Volt power tools. Now you don't have to compromise when it comes to battery packs or buy duplicate tools.

Do all dewalts products have batteries?

No, in fact there is a corded version for each battery one. The corded circular saw is a 7 1/4 inch item number DWE575.

This is a REPLACEMENT battery pack. This will enable you to use the new style slide on battery on the old stalk style tool. The slide type batteries included in this package will work on the dcf886. You are spending a little extra to get a charger that you probably already have.

No this saw is not. There is a 7 1/4 inch that is brushless but this one isn't

is this brushless motor?

Will my Dewalt battery work with this circular saw Dw0242

As long as it's: 20v NOT pod style - slider slide only

will this work with a 20 volt ATOMIC battery?

Does this Saw have a depth cut adjustment on it.

Dewalt no longer carries a rip fence that can be ordered separately. Has anyone found one that is...

Home depot carries a generic one Milo Craft that works with all Dewalt circular saws. They have three different sizes in this kit and I use one of them in both my corded and battery operated one. All you need is to check the model number against the booklet in the package to get the correct one. I have had no problems in using these guides.