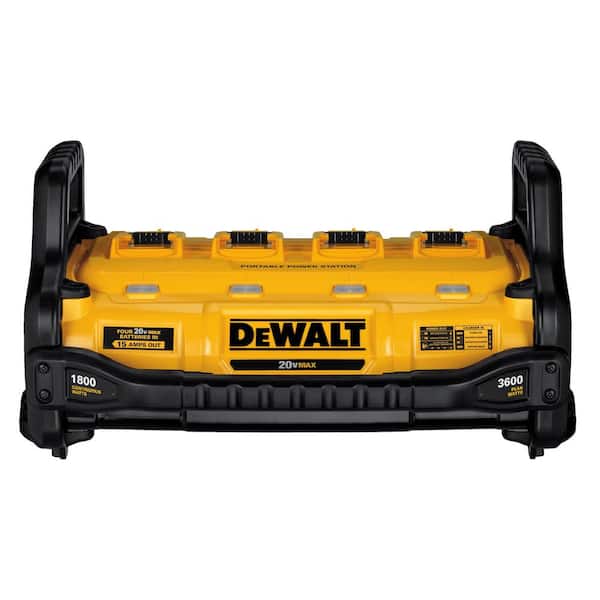 DCB1800B 1800-Watt Portable Power Station delivers 1800-Watt continuous and 3600 peak AC power when supplied with four DEWALT 20-Volt MAX batteries, sold separately. DCB1800B is also a multiport battery charger for one to four 20-Volt MAX or 20V/60V MAX FlexVolt batteries. DCB1800B emulates a 15 Amp residential circuit branch delivering the feel of household AC power. Patent Pending modified sine wave is compatible with both standard and electronically controlled variable speed tools. DCB1800B is self-protecting against electronic overload and includes multiple protection features in battery charging. DCB1800B can be used in a variety of applications including jobsite and lifestyle use. It requires no gas to run, emits no engine fumes or noise and can be used in virtually any dry location. Also works with DEWALT FLEXVOLT battery packs.

Customer review from dewalt.com
May 30, 2020
Amazing power station i do recommend it!
Amazing power station i do recommend it!
by
1 person found this helpful
Nov 6, 2019
Been using this for 3 years, and it was great
[This review was collected as part of a promotion.] I have been using this for 3 years. And most of time, this was sitting at the corner of my room, charging batteries. But whenever I needed to use corded tool outside, or when the power went out, this came really handy. The biggest problem I usually had was the sump pump. When I experienced the first extended power outage, my basement was literally flooded with a foot high water. I had to get a gas generator because of that, but running a gas generator in the stormy night wasn't very fun experience. Especially, when the generator did not start due to carb problem, things got really bad. So, when Dewalt released this unit, it was the first one on my list, and as I expected, this ran the sump pump without any problem. Although I had to go to my friend's house to charge couple spare batteries once or twice, but the unit could run the pump for a day of power outage. Now, I really worry less about it. One thing to note is, this unfortunately outputs modified sinewave, so it might not work well with sensitive electronics, but I only used this to run the sump pump as well as other corded tools, so it was not a big problem with me.
by

Customer review from dewalt.com
Jan 20, 2018
Great Product, allows use of corded devices anywhe
I bought this so that I can use my equipment anywhere without the limitations of a cord. I had this for a year now and I am impressed. With a 4.0ah battery as my weakest link, I was able to power a 24" TV for a little over 7hrs. Great product that is a true game changer. This will work up to 15amps, so you can use heavy duty equipment like a table saw anywhere. It makes your corded products semi cordless and accessible anywhere
by

Customer review from dewalt.com
Mar 25, 2017
Great Product. I used this with 2 of the 2.0AH batteries and 2 of the 4.0AH batteries. With a 2.0...
Great Product. I used this with 2 of the 2.0AH batteries and 2 of the 4.0AH batteries. With a 2.0 as my weakest link I was able to power a 42" TV, a battery charger (about 1.5A) , and a laptop (about 1.5A 45w) continuously for 65 minutes prior to the batteries(the 2.0Ah) draining. I saw many reviews online and I was expecting a low battery indicator as the batteries were getting low, I did not get that warning. The station beeped a few times and a few seconds later it shut off as the 2.0AH batteries were drained. I am looking forward to trying this with all 4.0AH and higher batteries , especially the 9.0AH. This product opens the door for many possibilities. This does not come with a cord for the charger , so you will need to supply your own extension cord. I was expecting more from the packaging. If I spend a lot of money on something I want to know it is securely place in the box. Once you open the box it is just the product and a few manuals in the box. Charging According to the manual the charge time for 4x 5.0AH batteries is 2.5 Hrs and for 4x 6.0AH batteries 3hrs. Design It feels nice and sturdy and durable. It is about 20lbs and I do not mind the weight. This product ran very quietly, I tried it in my dining room and did not notice it at all. It has a fan, make sure the vent is clear so it does not overheat.
by
8 people found this helpful
Feb 22, 2017
I use the portable power station in my job site trailer as a power source to power non-cordless t...
I use the portable power station in my job site trailer as a power source to power non-cordless tools (like a Ridgid shop vac). So far I have been very happy and it has worked exactly as advertised. I set mine up with four 6ah flexvolt batteries so that there was no weakest link battery. When doing lots of production work cords and corded tools are typically the name of the game. For small jobs though finding an exterior outlet, breaking out 50 or 100 feet of extension cord, setting everything up, etc and then breaking it all down after making a few quick cuts is a time wasting pain in the you know what. Using this portable power station makes life a lot easier and is a big time savings especially when coupled with Dewalts flexvolt table saw or miter saw and wanting dust collection at the same time.
by
7 people found this helpful
Jan 4, 2017
Great New Product From Dewalt!
DeWalt is always innovating and this Portable Power Station is an excellent example. The Power station has 4 ports for changing any of the DeWalt Flex Volt batteries...it comes with indicator lights that give the status of each battery. This is very handy and keeps you from having to carry individual changers to the job site. BUT here's the innovation...this charging station can become a portable generator using the stored power in the charged batteries to power a 15 amp circuit...for corded tools or lights; a temporary power outage to run lights, a Fridge, or Freezer! No gas generator needed...just clean stored power! Another thing that's very nice is this power station is compatible with Dewalt's Tough Series tool boxes, so I have added it to my Tough Series Set and wheel it right to the job site. Two things to note...batteries are not included and neither is a power cord...just use at least a 14 gauge standard extension cord to either charge or move to out port to power corded equipment. I'm expecting to use this a lot on the job.
by
4 people found this helpful
Jan 5, 2022
Works fantastic. However, I can't give it 5 stars...
Works fantastic. However, I can't give it 5 stars because I feel it is WAY too expensive for what it does. But it does work great. Much, much more convenient that lugging a big generator around as long as you are not trying to run something for hours at a time. But to run a table saw, say, that only uses electricity as it is actually running, this works great.
by
Showing 1-10 of 137 reviews