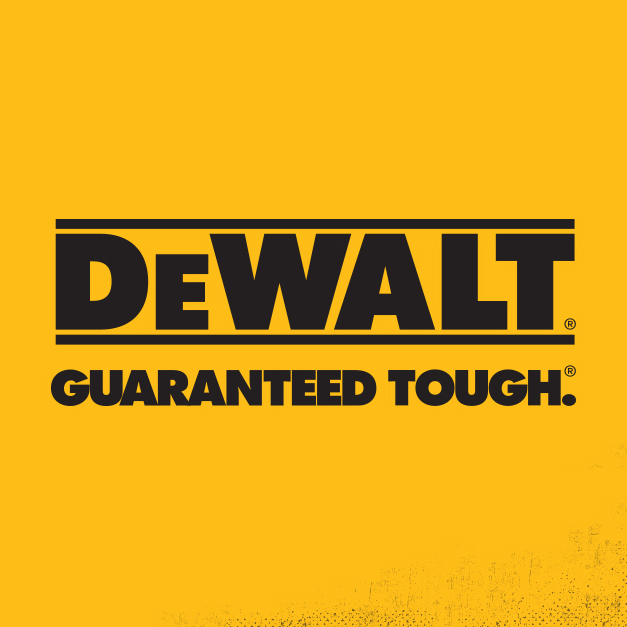 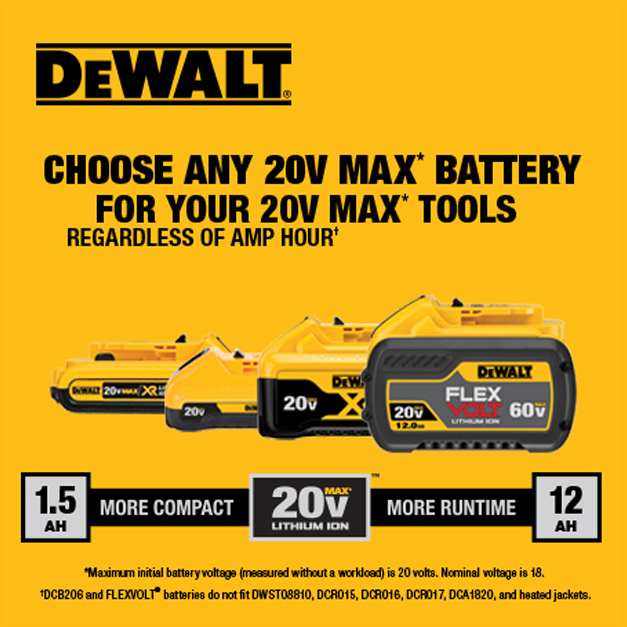 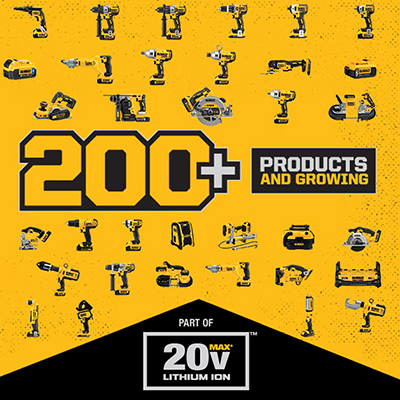 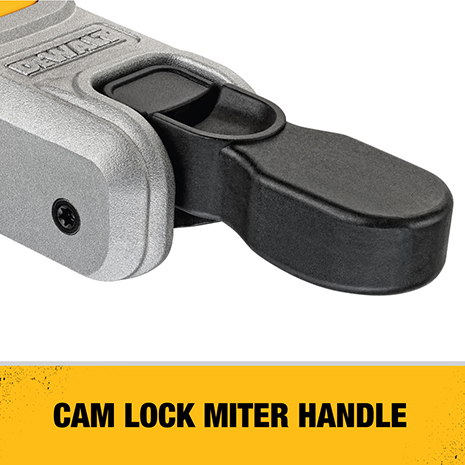 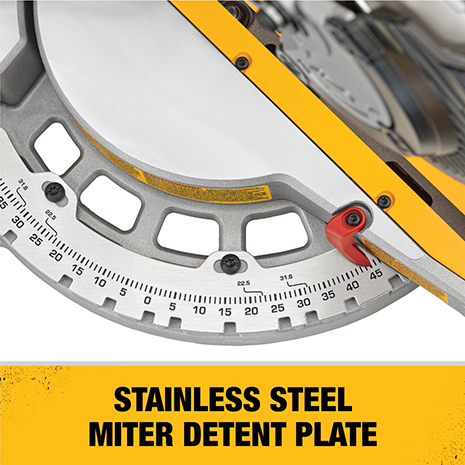 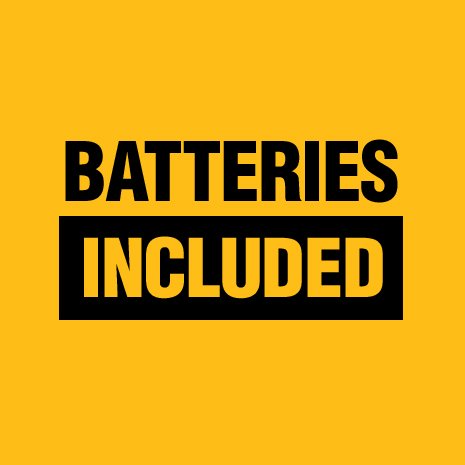 One Battery and Charger Included

One Premium 4.0Ah Battery and Charger. 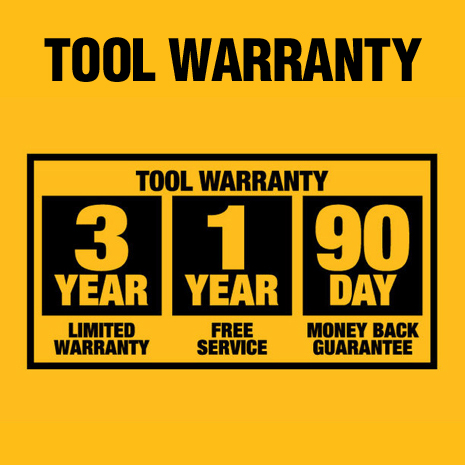 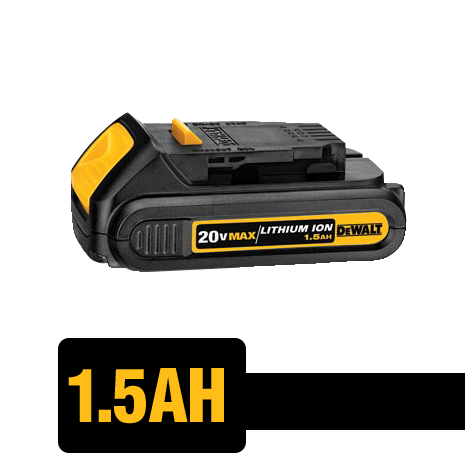 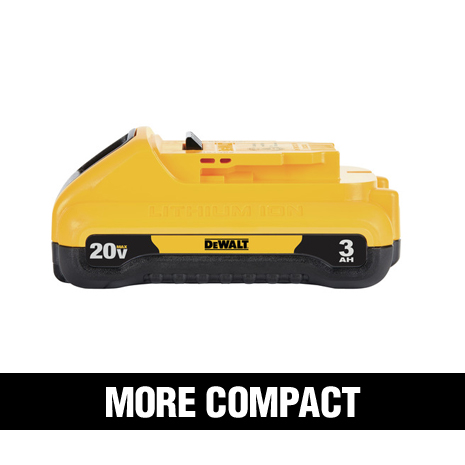 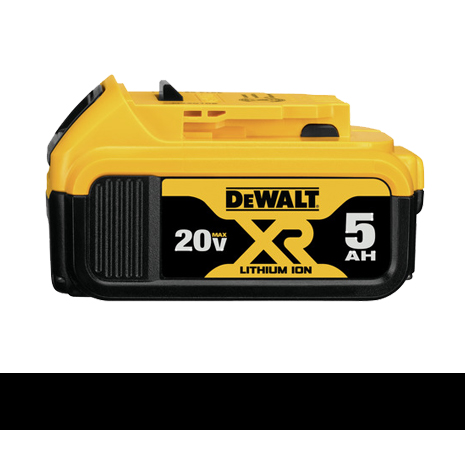 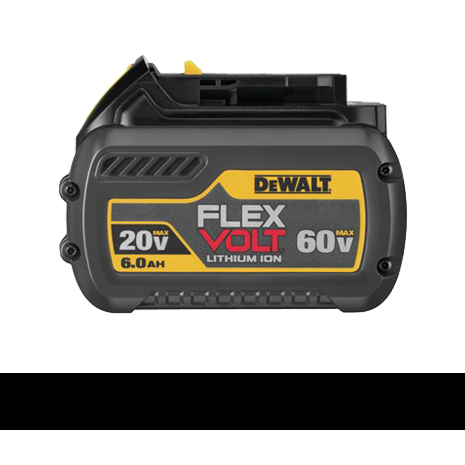 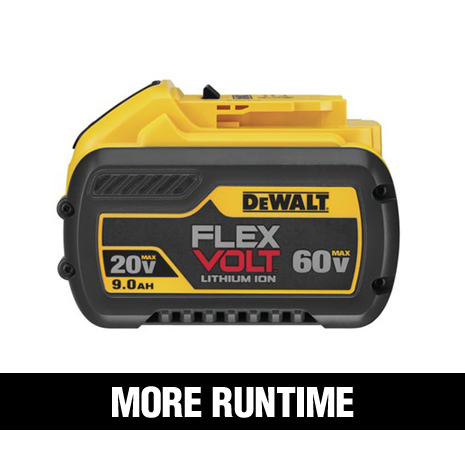 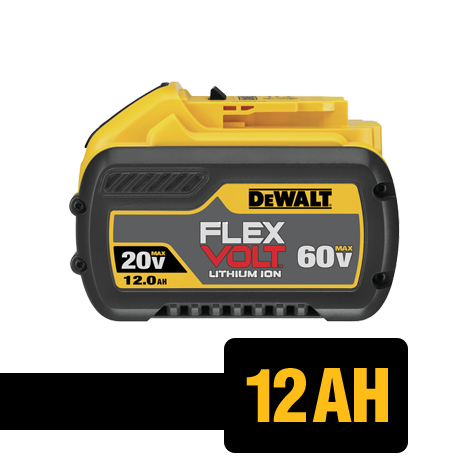 One Battery and Charger Included

One Premium 4.0Ah Battery and Charger.

What is the height of cut on a 45 miter? Will it cut taller base?

Can i use a Dewalt stand with this??

As far as I can see it will work. But I don't know for sure. I got it to take to job sites for small work of trim.

Can it cut baseboards vertically against the fence

It can cut standard 3-1/4 baseboard. Higher baseboards are not easy. I use 5-1/4” height often and it will cut it one way but not the. You need to do a flip cut. All in all a great tool. Hope this was helpful.

Hi Nil, yes you can cut crown molding with the miter saw DCS361M1

Pages 11 and 12 of my instruction manual give instructions for cutting nested crown molding. For nested crown, if the molding is angled between the fence and base of saw, it says the max size is 9/16" by 3-5/8".

Can i convert this saw to corded if i need to?

Can I add a corded adapter?

Can I cut tiles with this?

What kind of tile . If its stone, glass, etc.... you might want to grab a tile saw wood planks or vinyl it would be fine.

would this saw cut 6 1/2 baseboard

Pretty sure it would handle that

Customer review from dewalt.com
Feb 26, 2019
Works great, very light, ......A++++++
Works great, very light, ......A++++++
by Manny
Feb 21, 2019
Great saw to have on the truck, lacking percision
I recently purchased this saw from a big box store. I really needed something for the small stuff that I just really don’t feel like taking out my Festool Kapax on my best fence stand, because this stand is a beast. I also should note that I have a vast verity of Makita 18v tools but found that the cost of their similar saw was just outrageous for a small battery powered saw. With that I set my eyes on this little guy and the Milwaukee that is similar. I settled on this saw because first its the best in class price, and two well its the best in class price. I just really don’t feel like the investment for a small saw, that I wont be using full time should be outrageous. Upon opening the box the saw is fully assembled and comes with a table hold down, dust bag, charger and 4.0ah battery. I was happy it also came with a 40 tooth blade The saw came with a 2 bar charge so I let it charge full and then took it out and a small cabinet job and gave er a go. I have many guys as well as friends that use the 12’’ Dewalt saws and I have to admit tho my Festool is far superior I’m totally jealous of the shadow line. Lasers suck and the shadow line just works incredibly well. Very cool feature. I took a piece of red oak hardwood flooring and did some test cuts. The first cut I was impressed, the blade did spin fast enough and didn’t burn the wood, it also had no issue going thru the dense oak. Then cuts both ways on a 45, good cuts and perfect 45. Now the bevel......This saw only bevels one way. I don’t find this a issue at all but may be a issue for a novice that cant cut backwards and upside down. When I cut the oak on a 45 bevel the saw didn’t cut square so I tried again with a plung cut and then again with the bevel slide, same result every time. I guess it could be possible I got a bad saw, but I don’t think so. One of my crews has this same saw and I will try the same thing on it, somewhere down the line. I don’t plan on using this saw for much, toe kicks, scribe, and I even ran a little quarter round with it today. Overall Ithink this saw will become a staple in my arsenal of tools. The convenience factor is absolutely worth the small investment. I even think I’ll be buying a few more for my other trucks. Over all great saw, has plenty of power for small jobs. I just wish it would cut square on a bevel.
by American Pride

Customer review from dewalt.com
Nov 19, 2018
Convenience at its best!
[This review was collected as part of a promotion.] I purchased this portable lightweight mitersaw because of its battery operated feature. Most of the job sites I work on are in condo buildings and this lightweight beast is no problem hauling up 3 flights of stairs. I can’t recall one time I had to change a battery on the job site when it was initially fully charged. Awesome purchase and one of many I have made with Dewalt!
by Rock

7 people found this helpful
Mar 14, 2016
holds its own !!
I had my doubt about this saw,the price being on the high end and all. Once I bought this saw ,I put it through the ringer . I ran the saw on 760 square foot of 8inch laminate flooring , 325 linear ft. of base board an quarter round , along with some framing .. With any tool you just have to get comfortable with it , I adapted to this one quickly .... definitely worth the purchase....
by finisher
8 people found this helpful
Sep 28, 2015
Cordless convenience, big saw performance
This is a very versatile, portable, cordless sliding miter saw. The saw operates on a 20 volt battery and comes with a 4.0 Amp hour battery and charger capable of fully charging the battery in less than an hour. The battery can power any of the Dewalt 20 volt lineup of tools. The saw comes equipped with a 7 1/2 inch carbide tipped blade. It is a sliding compound miter saw, and the sliding ability of the saw is key to providing big saw performance. Cut capacity is about 8 inch straight and 5 ½ inches at 45 degree, the same capacity as I get with my corded 12” Dewalt miter saw. Being battery operated and weighing about 35 pounds makes it very portable and good for outdoor work, as you don’t need to have a nearby power source. Run time is good (rated to make over 100 straight 2 x 4 cuts on a single charge), and with an extra batter pack you can work all day without issue. Saw produces a very clean cut and handles cutting hard wood with little difficulty. I didn’t notice any undue stress on the saw when cutting oak, which I did expect to a degree as its battery powered, but to my surprise, power didn’t seem to be a problem. The table is of ample size and heft. Saw angle easily adjust left to right and clicks into place at the standard locations. To change to compound miter you need to release a lever in the back. Gauge for both angle and miter are easy to read. Blade guard worked flawlessly. Unit comes with a work hold down
by ToolTimeTony

RIDGID introduces the 15 Amp Corded 12 in.RIDGID introduces the 15 Amp Corded 12 in. Dual Bevel Miter Saw with LED. Its dual bevel capability and adjustable miter table make it perfect for a wide range of cuts and applications. A powerful motor paired with best-in-class features provides ultimate convenience on any job site. Backed by the Industry Leading Lifetime Service Agreement, the 15 Amp 12 in. Dual Bevel Miter Saw with LED includes a 12 in. blade and blade wrench, sliding miter fences, a dust bag, a work clamp, and an operator's manual.See Full Product Description

The M18 FUEL 7-1/4 Dual Bevel Sliding CompoundThe M18 FUEL 7-1/4 Dual Bevel Sliding Compound Miter Saw was designed for the demand needs of the professional carpenter and remodeler. Designed to increase productivity and efficiency on the jobsite, the 2733 combines the best in accuracy, portability and performance. Weighing in at only 28 lbs. with battery, the 2733 is the Lightest Weight saw in its class. Dual bevel functionality provides users the most efficient and productive way make a variety of different cuts without flipping or turning the work piece. The combination of the power state brushless motor and M18 REDLITHIUM XC5.0 battery delivers over 600 cuts per charge for all day run-time on a single charge.See Full Product Description