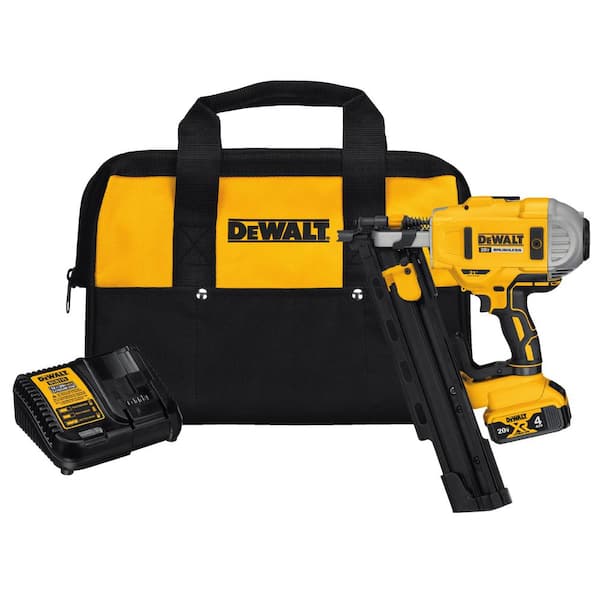 The DCN21PL 20-Volt MAX 21° Plastic Collated Framing Nailer is DEWALT's first cordless 21° framing nailer. The DCN21PL is capable of driving plastic collated fasteners up to 3-1/4 in. L for use in a variety of applications. The DCN21PL can also drive the largest diameter fastener in framing applications, the 0.148 in. Dia nail. The upgraded engine design increases power and drive quality compared to previous DEWALT cordless nailers. Its compact shape, well-balanced design and easy to operate features makes it a highly productive tool that helps pros get the job done quickly and efficiently.

36
Filter by:
Showing 1-10 of 445 reviews
Jun 16, 2021
every day gets Jammed.
This Nail Gun is good for 10 Nails per Day. It keeps jamming every day. is not worth the Money. i would not recommend it.
by Alco
Response from DewaltProductExpertJun 17, 2021
Hi Alco
We appreciate your feedback on the DCN21PLM1. We are sorry to hear about the issue you are having with your product. This is not the kind of performance we expect from our products and would like to speak to you about this issue so we can assist you in resolving this to your satisfaction. Please email me at wecare@sbdinc.com and reference case # 13441226. I look forward to hearing from you.
We apologize for the inconvenience you are having.
Thank you
Roxy
Customer Service
May 3, 2021
This nailer is increadible! Purchased for a fence build, and wow did it perform! Able to adjust n...
This nailer is increadible! Purchased for a fence build, and wow did it perform! Able to adjust nail depth and use difference size nails that changed out in seconds. My days of hauling a compressor, hoses, and extension cords to a job site is over. I have changed out virtually all my power tools with the DeWALT cordless line. The battery life is fantastic, and I can exchange all my batteries from tool to tool if needed. I highly recommend... THEY NAILED IT !
by HomeDepotCustomer
Jun 2, 2020
Great Nailer, Saves Time
[This review was collected as part of a promotion.] This worked great for my needs. Lost a star not so much for the weight to me, the box of nails (1000pk) felt heavier. The magazine capacity is just too low for me. The capacity is 49 nails I beleive, but for the nails I used they came in strips of 28 so I could only load one strip at a time. Great to have on the job site, especially at the end of the day when you packed up all of the compressors but noticed something that needs to be addressed before you leave, instead of taking everything back out you can just use this in a matter of seconds. I've been in situations where a cordless nailer would have been very handy, especially for the roofers who have to run the cord all the way up there from the ground. I used this for a few projects around the house so far and it worked great. I must admit there about 2 proud nails and they were due to user error. My very first nail was proud because I used 3-1/4" nails and did not change the mode to setting 2 , for longer nails. The other time is when I merely did not apply enough pressure to the workpiece and did not hold the nailer firmly against it. The rest of the nails sank in just fine and I did not have the depth adjustment set to the lowest setting(There is a dial you turn on the top). I did not experience any jams. I used this to reattach a piece of decking that fell off, and again to form a frame for other projects I had. One was for the base of a stand I was making it. Another was to add blocking to a workbench I made. All of the materials were 2x's that I was attaching to other 2x's The ramp up time is not that long, a second or so, to activate the nailer you have to press the nose against your workpiece. From there it will start to ramp up, then pull the trigger to fire a nail. Once the nose is depressed and starts ramping up, you have 5 seconds to fire a shot otherwise it will power down. Just release and depress the nose again to reset it. The loudest the nailer got was 86db according to my sound meter, you definitely want to have ear protection on when using this. To load the strips simply drop them in from the back. The rafter hook worked well, ueasy to adjust. The trigger lock adds security especially while transporting it. This comes with a marring tip and I left it on just so I would not lose it. I did need it for the decking though and it worked well. This takes full head nails. The grip rite nails worked fine. No issues
by SmokedNeckbones

Featuring a compact shape and well-balancedFeaturing a compact shape and well-balanced design, this Plastic Collated Framing Nailer by DEWALT is a highly productive tool that helps pros complete any job. It is DEWALT's first cordless 21-degree framing nailer. Use it to drive plastic collated fasteners up to 3-1/4 in. in many different applications. It has an upgraded engine design that increases power and drive quality when compared to other DEWALT cordless nailers. It can also drive the largest diameter fastener in framing applications. When you purchase get a bonus 20-Volt MAX XR Lithium-Ion Premium Battery Pack 4.0Ah.See Full Product Description

RIDGID introduces the 21-Degree 3-1/2 in.RIDGID introduces the 21-Degree 3-1/2 in. Round Head Framing Nailer. Featuring Magnesium Metal Housing, this nailer is the fastest in its class at 8 nails per second compared to competitors 3 nails per second. This nailer is backed by the RIDGID Industry Leading Lifetime Service Agreement. That means FREE Parts. FREE Service. For LIFE. Included with the Round Head Framing Nailer are a swivel quick connect, no-mar pads, and an operator's manual.See Full Product Description

The Paslode Cordless XP Framing Nailer deliversThe Paslode Cordless XP Framing Nailer delivers power, performance, and comfort for framing applications, without the hassle of a hose and compressor. As the lightest cordless framing nailer available, it's easy and comfortable to use all day. It drives 2 in. to 3-1/4 in. 30° framing nails flush into the hardest framing materials, and will keep you running with 9,000 shots per charge. It comes in a hard case with a battery and charger.See Full Product Description

The 20-Volt MAX Cordless 30° Paper CollatedThe 20-Volt MAX Cordless 30° Paper Collated Framing Nailer drives nails from 2 in. to 3-1/2 in. With long runtime and powerful versatility, this nailer is built to handle tough jobsite duty. This tool features our upgraded engine design for increased power and drive quality compared to previous DEWALT cordless nailers. Its compact shape, well-balanced design, and easy-to-operate features make it an efficient, highly productive tool in your team's hands. This kit includes a battery, a charger, and a kit bag.See Full Product Description