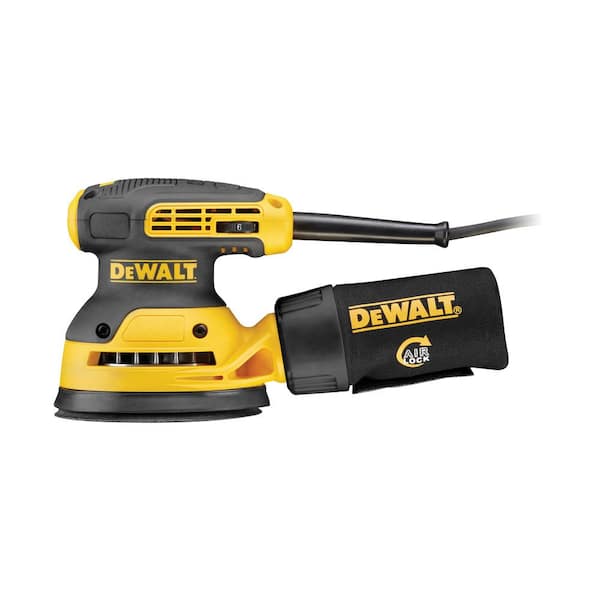 The DEWALT DWE6423 5 in. Variable Speed Random Orbit Sander is ideal for sanding applications on wood, metal and plastic. This sander features a 3 Amp motor that spins the pad at 8,000 OPM to 12,000 OPM. Shorter height allows the user to get closer to work piece for sanding.

21
Filter by:
Showing 1-10 of 657 reviews
Mar 18, 2022
Absolute garbage
Lightly sanding ash with 220 and it fell apart. Only owned it for one week
by
Response from portercableProductExpertMar 22, 2022
Hi. I am sorry to hear of the issue you are having with your Orbital Sander. We would like to speak to you about the Factory warranty on the product and assist you further with getting the issue resolved. Please contact us at wecare@sbdinc.com and reference ticket # 4061794. Thank you. DEWALT support
Nov 21, 2021
Great sander
This is a awesome sander. I put this sander to the test. I redid the exterior of my wood shake home. Completely stripping the loose paint off of my home, after pressure washing/scraping I needed to sand every piece of shake. That’s where this beast came in. I used this sander everyday for 3 months on each and every piece of shake. This sander is durable, powerful, and built to last.
by

Customer review from dewalt.com
Jul 5, 2021
Awesome performance! Highly recommend this DeWalt sander!
I have one of those outdoor wooden garden benches with the iron metal sides. Over the years, the wooden slats took a beating and the stain and finish were pretty much gone, despite storing it in the shed before the snow hit. I had a palm sander I was using to take off the finish, but it proved to be more than a chore, as it was not only making my body sore using it, but also not being very effective at removing the old finish, despite the different types of sandpaper I was using. After everyone saying that a random orbital sander was worlds better, I looked at different models and checked out this one at Home Depot. Other reviews were really good and I know DeWalt has great quality, so I picked up this one on sale. I chose the variable speed over the standard as they're more versatile in different situations. Everyone was right! It's night and day compared to my palm sander! It took the finish down to bare wood like nothing and made short work of every plank like nothing! The dust collection bag does a nice job of keeping the sawdust to a minimum and I wasn't sore afterwards like with my palm sander. It feels nice in my hand and is the right height and balance, unlike some I looked at that were taller and felt like they were gonna tip over every time I held them. What's also nice is the placement of the on/off switch. Another one I looked at had the buttons flush-mounted on the sides and it felt awkward pushing them in. I don't have very big fingers, and if I was having difficulty, I can imagine someone with bigger fingers having even more of an issue, especially if they're wearing gloves like I planned on doing. This DeWalt has the switch nicely on the front. I plan on using it to rough up the finish on my metal 4-tier shelf to repaint and also on my utility push cart to apply a spray-on truck bedliner. I have no regrets buying the one I chose!
by
1 found this review helpful
Mar 31, 2021
My old DeWalt sander finally quit after about 15 years. I've been doing a lot more woodworking la...
My old DeWalt sander finally quit after about 15 years. I've been doing a lot more woodworking lately, so I'm not surprised. When the time came to choose a replacement, I didn't have to think long. Got another DeWalt. It's improved! The handle is better - my had doesn't get as tired during long sanding stints. It has variable speed, so you can slow it down when you need to. The internal fan that blows the sawdust into the attached dust bag seems to work better as well. Overall, it's a good sander if you don't need cordless (I haven't needed a cordless sander yet, so just got this.)
by
2 found this review helpful
Dec 31, 2020
End Cap Broke in less than a week light use
I purchased this product a few weeks ago and deeply regret doing so. To keep this simple, the end cap, which holds the sand pad in place broke. I have now spent an extra $40 to get the replacement part online. This part, by the way, is not easy to find in stores. I'm now waiting for the new parts. Meanwhile, I'm unable to complete my project and have spent more than 50% of the cost of this product on replacement parts in just a few short weeks of ownership and very light use.
by
Response from DewaltProductExpertJan 8, 2021
Hi-
We appreciate your feedback on this unit and are sorry to hear of the issue you are having with your product. This is not the kind of performance we expect from our products and would like to speak to you about this issue so we can assist you with resolving this to your satisfaction. Please email me at wecare@sbdinc.com and reference case # 12836367. I look forward to hearing from you.
Thanks
STANLEY BLACK AND DECKER Customer Care

Our 20-Volt MAX XR Brushless 5 in. CordlessOur 20-Volt MAX XR Brushless 5 in. Cordless Random Orbital Sander provides you with the power and runtime needed to get the job done. A variable-speed dial provides ultimate speed control from 8,000 - 12,000 OPM for a variety of projects. 1-handed locking dust bag attaches securely to the sander to aid in dust collection or the user can attach the sander directly to the DWV010 or DWV012 dust collectors. Rubber overmold grip provides comfortable sanding. Replacement 8-hole hook-and-loop sanding pad for quick, easy paper changing. The DEWALT 5 in. Random Orbit Palm Sander Pad DW4388 is made for use with the DW421K and DW423K sanders.View Full Product Description

Makita's 5 in. Random Orbit Sander with variableMakita's 5 in. Random Orbit Sander with variable speed (model BO5041) combines and speed and performance with improved grip and control, including an innovative adjustable front handle. It is ideal for woodworkers, finish carpenters and general contractors. The BO5041 features a Makita built 3 Amp motor with over-sized sealed ball bearing construction for longer tool life. The variable speed control dial (4,000 - 12,000 OPM) allows the user to match the sanding speed to the material, with a large 2-finger trigger switch with conveniently located lock-on button for continuous use and increased operator comfort. The large 1/8 in. random orbit action delivers fast and smooth sanding and a swirl-free finish, with a pad control system for controlled pad speed upon start-up. Additional comfort and ease-of-use features include a new adjustable front handle to allow for sanding in corners and confined areas, as well as ergonomic rubberized handles for improved operator comfort and control. The BO5041 uses quick-change 5 in. eight-hole hook and loop abrasive disc and has an efficient through-the-pad dust collection system that helps provide a cleaner work environment. The high capacity dust collection system with built-in vacuum port adapter is engineered for improved dust collection. The rubberized palm grip and top handle fit like a glove with even pressure and easy control.View Full Product Description

The RIDGID 6 in. Variable-Speed Dual RandomThe RIDGID 6 in. Variable-Speed Dual Random Orbit Sander features electronic variable speed control of 4000 OPM to 10,000 OPM (no load speeds) to maintain constant speed and power under load applications. Its soft-start motor gradually increases the speed of the sander to provide an even finish. Its onboard vacuum adaptor fits standard 1-1/4 in. or 2-1/2 in. hoses for a cleaner, virtually dust-free work environment.View Full Product Description