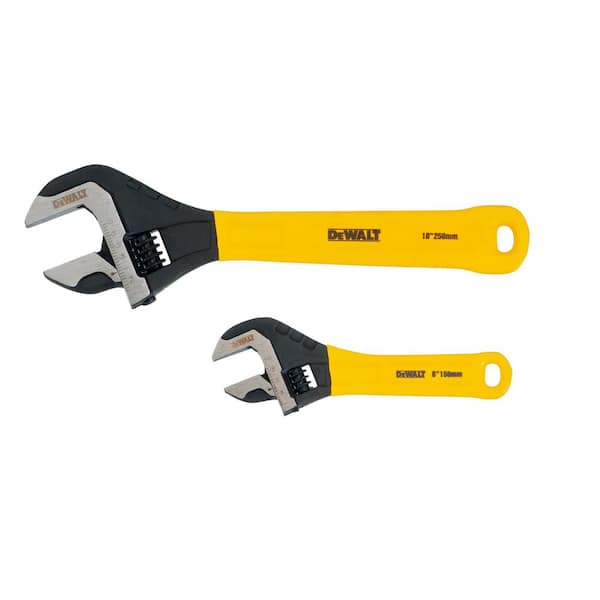 This 2-pack DEWALT Dip Grip Adjustable Wrench set has Grip Armor coating to help prevent the vinyl grip from peeling off. This vinyl grip also helps provide control in wet environments, perfect for outdoor use. Both wrenches have a wide jaw capacity to cover a range of sizes.

5
Filter by:
Showing 1-30 of 308 reviews
Apr 18, 2021
Smooooooth Operation!
[This review was collected as part of a promotion.] Ok! So I have a bunch of adjustable wrenches that won't open or close or have nicks in the faces. I absolutely love the Dewalt Wrenches. They are as smooth as butter. I had do recently do some plumbing projects for the in-laws. I love the opening width and rubber grips. Thank you Dewalt.
by

Customer review from dewalt.com
Apr 9, 2021
Reliable and sturdy! Easy to read measurements
[This review was collected as part of a promotion.] Just finally got around to using these bad boys, they came out of the pack of two with a small and big sized one. They are heavy made well constructed and etched measurements with a comfy grip no slip like my old slick metal ones once you get oil on are hard to hold, ain’t a bolt too rusted or siezed up to get worked loose with these.love these wrenches as well as a great addition to my collection, black and yellow all the way!
by

Crescent's 7-Piece Combination Wrench SetCrescent's 7-Piece Combination Wrench Set features the innovative X6 design in the box end. These wrenches allow you to grip six different types of fasteners while offering the convenience of ratcheting in the open end. Designed for a wide range of jobs, this set includes sizes 5/16, 3/8, 7/16, 1/2, 9/16, 5/8 and 11/16 in.See Full Product Description