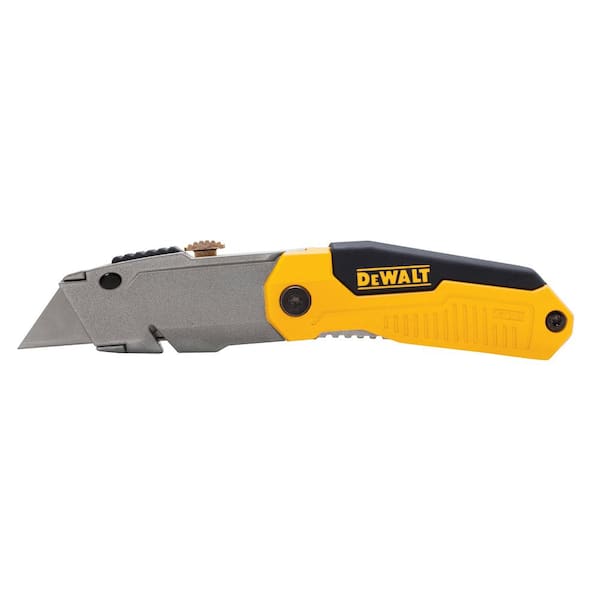 The DEWALT Folding Retractable Utility Knife is designed to offer the convenience of a retractable knife with the ease of a folding feature. This knife is built with a sturdy metal body, 1-handed opening and closing for ease of use and interior blade storage for convenient access to new blades. Made to handle a range of materials, the blade measures 2-1/2 in. for variable cut depth depending on your needs.

73
Filter by:
Showing 1-10 of 294 reviews
Sep 21, 2021
Nice knife
it's a good knife and love the way it sits in my hand, not as nice as the previous model, but it's OK. Blade cover just broke off after about 3months of use. and I use about 3 blades a week, so it doesn't get to much abuse. also the cover opens and closes roughly. it should be just a smooth open and close.
by
Response from DewaltProductExpertSep 23, 2021
Hello

We appreciate your feedback. We would like to speak to you about the experience you had. Please contact support at WECARE@sbdinc.com and include a brief description of the issue you are having along with your contact information.

We look forward to hearing from you.

Feb 7, 2021
Fantastic Knife
I bought 2x of these in 2016. Have yet to open the 2nd because the first one is still holding up like a champ. There's a lot of bad reviews for this knife but i love it. I'm a Firefighter and Landscape Construction Professional on a daily basis. This knife is my go to knife. Fits perfectly in the hand and extremely durable. As you can see from the picture mine has been through a lot and well used in the last 5 years. Love it! As with all my DeWalt tools built with quality.
by

Customer review from dewalt.com
Nov 13, 2020
Terrible the blade gets jammed I can’t use it...
Terrible the blade gets jammed I can’t use it
by
Response from SBD_Product ExpertFeb 10, 2021
Hi –
Thank you for leaving your feedback from your experience with this unit. I am sorry to hear that you’re having issues with your unit after such a short amount of time. I’d like the chance to speak with you about this problem and your warranty. If you are interested in speaking with me I can be reached by email at wecare@sbdinc.com. Please also reference case # 12962983. Hope to hear from you soon!
Thanks
Becca
STANLEY BLACK AND DECKER Customer Care
Aug 26, 2020
Sturdy Knife
[This review was collected as part of a promotion.] I started using this knife about a week ago. First thing I noticed was the sturdy construction. Since its a folding knife, the handle is wider than standard utility knives and it fits my hand better. On board blade storage is nice. The blade stays fixed in the quick blade change release even when pulling hard on the knife. The only thing I can say i didn't like is that you have to retract the blade before folding it closed. It essentially doubles the time it takes to close the knife. Its only a little more time but when you're on a ladder holding something, it can be annoying. Ill keep using this knife because it works well for me.
by

Customer review from dewalt.com
Aug 21, 2020
Excellent upgrade!!
[This review was collected as part of a promotion.] I got this about a week ago and really love the quality that I’ve come to expect from Dewalt products. It is very well built, rugged (as I use this as my primary pocket/general knife, and carry/use it daily here in Washington State) and all of the features it offers. I have carried a Dewalt Auto auto load folding utility knife (DWHT10261) for at least 8 years that is my absolute favorite utility knife and purchased a mother Dewalt folding utility knife back in 2016 (DW10035). The DW10035 is ok but I didn’t care for the location of the blade storage release and it just felt “cheap” (it is not as solid in my opinion as the DWHT10261). So I leave it in my tool box as a good “spare”. But then saw this new DWHT10035L and just had to see if it would replace my DWHT10261. Upon opening the package, it is built very solid. Has great weight and feel in my hands. This is far better then its predecessor (the DW10035) and the storage release tap is now located outside the folding frame of the knife unlike the previous model. So now I have TWO FAVORITE utility knives that I trade out every other day (don’t like to have my knives feeling neglected lol). So in short, yes I would definitely recommend this utility knife to anyone.
by

Customer review from dewalt.com
Aug 16, 2020
Sleek and durable knife.
[This review was collected as part of a promotion.] This utility knife surprised me a bit. When I received it, I thought it was going to be a bit bulkier than it was, since it folded, but it's fairly compact. It has the signature yellow and black housing, and the all-metal core, it looks very nice when you use it or have it stowed away. It has a belt clip, which is a personal selling point for me, has to have the belt clip. The housing has a compartment for extra blade storage, tucked neatly away for minimal clatter when using it, and it comes with 3 blades, the max capacity of the storage, so that was nice. The rapid load system is pretty neat, and works pretty well. The only thing is the button is a bit small so that it still folds away, so if you have big fingers it might take a second to get the hang of it. Overall I've been using this knife as my daily knife for a bit now, and it gets the job done well, and fast, I would definitely give this 5 stars, very heavy duty, feels good in your hands and to use. And since the folding is done using the clip to secure, instead of the bump on the back, it can replace a pocket knife of the same style, if you're looking to do some more precision cutting.
by

Customer review from dewalt.com
Oct 14, 2018
Found out it is the blades.
I bought this and also some IRWIN replacement blades. I read the reviews and found out I was having the same problems most people were having.....keeping the blade in, the button not working. blade not retracting. Come to find out, the blades that come with the knife are slightly smaller than what they need to be. I took the knife completely apart and reassembled before I decided to try the IRWIN blades. They fit like a glove with no movement whatsoever. Here are some photos with the IRWIN blades behind the DeWalt blades that came with the knife. You can clearly see the difference in the size when flush at the bottom, top and right side of the blades. Hopefully this will help more consumers. DeWalt has better quality than this so this is an epic fail on their part.
by

Customer review from dewalt.com
Aug 10, 2018
Shattered into three pieces
This utility knife (box cutter) slipped from my hand and shattered into three pieces when it hit the floor. The black part of the handle broke off, and the little knob that extends or retracts the blade broke off. What happened to DeWalt's legendary toughness? I would only recommend this knife to people I don't like.
by

Customer review from dewalt.com
Dec 14, 2017
Terrible quality
Terrible change in quality....had my old one for years loved it ...new plastic one i dropped once and broke.....
by

The MILWAUKEE FASTBACK 6-in-1 Folding UtilityThe MILWAUKEE FASTBACK 6-in-1 Folding Utility Knife features a press and flip mechanism providing users with an easy, one-handed opening. The 6-in-1 knife has a wire stripper, folding screwdriver, and a fold-out 1/4 in. bit holder. The bit holder includes a reversible Phillips #2 and slotted 1/4 in. bit. This folding utility knife is equipped with a built-in bottle opener providing users with added functionality. Tool free blade change allows the user to quickly and easily insert a new blade. This multifunction pocket knife has an all metal design for a longer life with a durable wire belt clip to reduce pocket tearing with a blade holder designed for scoring. The folding utility knife has a metal extension that prevents accidental blade removal and a lanyard hole for convenient tethering.See Full Product Description