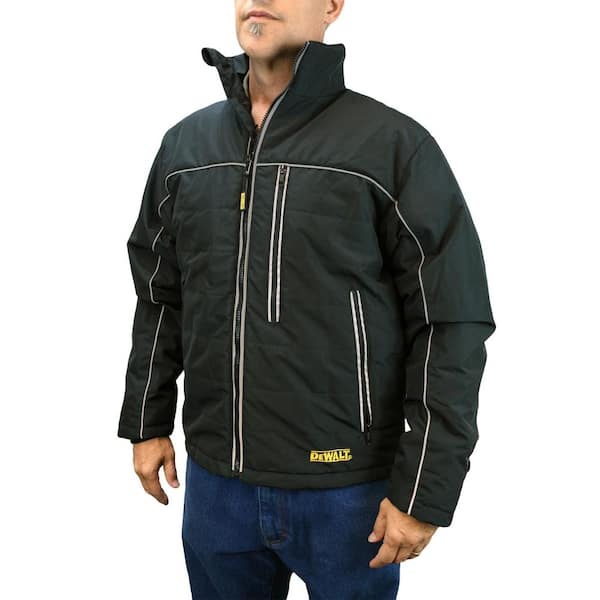 Customer review from homedepot.ca
Jan 16, 2019
Warm!
Heats up quickly. should have a draw string at the waste as bottom is quite loose.
by

Customer review from homedepot.ca
Jan 10, 2019
Good Buy
Purchased coat for the husband for christmas. He really likes it says works great the batteries are bulky but not an issue. It is also a nice looking coat can wear it anywhere
by

Customer review from homedepot.ca
Dec 15, 2018
Dewalt heated jacket
I am very happy with the jacket. I’ve had two of the Milwaukee ones in the past years, just unfortunately one was destroyed due to work mishap, and the other was lost during my recent move to a new house. When it came time to purchase I decided to look into other brands. I’ve got both Milwaukee and Dewalt tools so those both stood out as good options. I looked through other brands (non tool retailers) and they either weren’t high enough voltage or AH batteries to give the heat demanded or the runtime needed for myself working exteriors in these -30 Celsius Canadian winters. Now choosing between the main competitors of tool suppliers ( as they already have the battery platforms ) I found the dewalt has the highest voltage rating, which means it’s deliverimg the quickest/warmest heat compared to many others only using 12v power. Even if they carry 18v batteries be sure to check the coats rating as some are limited to 12v, so no matter the battery the cost can only push so much heat. Again though the higher voltage ones will provide stronger heat and quicker heat up times, but will drain the battery faster obviously. But running this coat on medium is like running others ive tried on full. So to reduce battery consumption it can be used on lower settings to match the performance of others and come closer in runtime as well, or if you need the full heat for sometime then it’s definitely suggested to upgrade to the 4AH batteries. The only downside I have found with the dewalt coat is that the battery pocket is a bit too much toward the back rather than the side. This makes is very hard to change the battery without removing the coat. I’m not sure if they did this in m effort to improve comfort while wearing the coat with battery in, but it makes it difficult to change compared to others. It can be done while wearing but is difficult. Others I’ve owned before are easier to access the battery pouch while wearing the jacket. But this Dewalt jackets placement does help a bit with the comfort of the jacket while wearing it, which to me is an alright trade off for the slight inconvenience of removing the jacket to change batteries. But again I’ve bought 4AH batteries so this doesn’t happen very often where forced to change batteries mid day ( if running medium setting) I still have a Milwaukee heated sweater (hoodie) and I really enjoy that these two items have different placements for the batteries so the batteries aren’t sitting doubles on eachother rather they are side by side while wearing the sweater and jacket together.
by