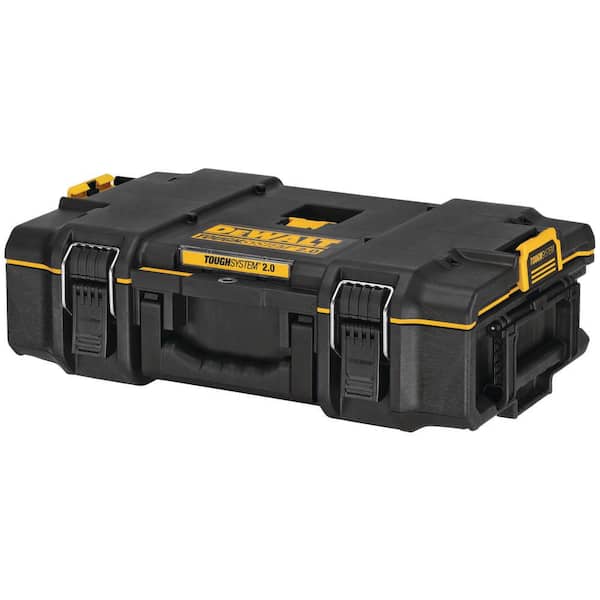 The TOUGHSYSTEM 2.0 Tool box has patented auto-connect side latches, allowing for 1 hand operation. It also has 2-piece metal wire front latches for added durability when securing tools inside of the box. This tool box offers 20% more tool storage when used with DWST08300 and DWST08450 as part of a tower. It is IP65 rated for dust and water resistance and has a 110 lbs. load capacity. The tool box contains 2 large organizer cups on the inside with removable dividers for optimal organization. The TOUGHSYSTEM 2.0 22 in. Small Tool Box is compatible with all TOUGHSYSTEM products.

61
Filter by:
Showing 1-10 of 1,633 reviews
May 10, 2022
Better than expected
I have to admit they were better than I expected they would be, super heavy duty, not like those cheap ones, these are built to take a beating. I got the inserts to go with it and was very happy how they turned out. Great investment. Treat yourself to these, you'll be happy.
by
Apr 14, 2022
Rugged and Tough
Bought this box a few weeks ago. I can say that I love it! As a plumber, I carry a good amount to tools with me to my jobs and I hate shifting through them trying to get to what I want. I’ve transferred all my main power tools from my bag to this box. The deep foam allowed me to organise and keep everything in place and the fact that I can lock it, it will keep the sneaky fingers away from my tools. I plan to get a few of the small boxes for the rest of my cordless tools. I can’t wait!
by
Apr 1, 2022
A Step Above
This box set has been one of the best investments of my career. I have fellows who use Rigid and Milwaukee packouts and I did enjoy using the Rigid boxes when i would help them. I am a dewalt guy and I am proud of the dewalts toughsystem 2.0. Keep making strong dependable tools and accessories so i can continue to brag on yall.
by
Feb 8, 2022
I'm completely satisfied with the system. I was torn...
I'm completely satisfied with the system. I was torn between a few for my garage organization. I researched extensively for my perfect fit and this is it. I'm not in desperate need to have them clip together but it's neat that they can. The huge sell for me was the vertical wall storage. Not only that it can but that it comes with lots of arms for the roughly $100 price point. For the money this is a more complete system for almost an entry level price. You would have to either build a lot of shelves or buy a lot of on wall units depending on what system you went with otherwise. I have no bad things to say, this is a perfect fit for me.
by
Jan 10, 2022
Great System
I have 14 toolboxes, 5 bins of various sizes and the sound system in my shop and trailer, and I love the flexibility that this system offers. I have several of the drop-in trays loaded with various tools and can quickly load up what I need to hit the road to do a project. I keep more fragile tools, especially electronics, in foam cutouts in the cases unless they are in use. The watertight seal works well. In my younger years, I worked with commercial sound, and these things put the flight cases we used to shame. The 2.0 cases have a much better interlocking mechanism, which was the one thing I didn’t like about the first generation.
by

Customer review from dewalt.com
Dec 19, 2021
couldn't be more pleased with this item...
couldn't be more pleased with this item
by
Nov 25, 2021
recommend
these boxes are worth the upgrade from the 1.0 boxes, way better construction
by
Nov 7, 2021
ToughSystem 2.0 Toolbox
High quality box for my 12V Max tools. And I added the foam insert DWST08121 to keep my tools secure. Was able to fit the drill, impact driver, saws all and charger perfectly. Great product DeWalt!
by

Customer review from dewalt.com
Oct 19, 2021
Run-off issues.
I've used these for several months now. I store all of my 20v products in these boxes. Tools in the roller box, batteries in the midsized, bits/blades in the small box. I had the original tough system for years(until the material deteriorated/the screw gasket on top gave out). I don't have a bed cover and haul them in my truck bed, so an upgrade was due. They are sturdy, and seem to keep sealed well... yet, they are not ideal for truck bed use. Any moisture on top of the box, even morning dew will roll right into the box. As much as one drop will rust out whatever you put in it if you don't dry it out. Needless to say, I'm in the market for new boxes. Sad considering I have roughly 2000$ invested in tools and the boxes themselves.
by

Customer review from dewalt.com
Oct 11, 2021
Toughsystem 2.0 auto-latch
Auto-latch broke when placing boxes together!! I purchased the Toughsystem 2.0 as I assumed it was going to be an upgrade. Sadly I was mistaken. The rolling tool box took a step backwards. If you open the box with water/overnight condensation on the lid it rolls directly into the compartment. Unlike the original Toughsystem rolling tool box, when you opened the lid it tilted back away from the box, allowing the water to disperse away from the compartment. I’m not sure whom is engineering these systems but perhaps they are loading them with light linen and only rolling around smooth parking lots in fair weather. Or perhaps it’s Dewalt’s (Black & Decker) plan!! Allow the water in and the tools/batteries won’t be covered by warranty for water damage and contractors will have to purchase more of same. I like the new design overall, I don’t want to come off as anti-Dewalt, it just alarms me that the auto-latching mechanism broke from attaching the other tool box. Perhaps it was a bad latch or perhaps bad design, lack of reinforcement. Either way it concerns me. What will happen when when of my workers (or myself) knocks them over or drops them when rolling across a job site? And if this has never happened to you that just means your time is coming!!! With thousands of dollars in just tools, batteries, chargers (not counting blades, discs, and so on) it does concern me. Hopefully Dewalt (Black & Decker) will have a positive response for me. After all I am a loyal customer and have not abandoned ship unlike a few employees and other contractors I sub that have jumped on the Milwaukee wagon.
by

The PACKOUT modular storage system is theThe PACKOUT modular storage system is the industry's most durable and versatile storage system. The PACKOUT rolling tool box is constructed with impact resistant polymers and metal reinforced corners so it can withstand harsh jobsite environments. The rolling tool storage box connects with all other PACKOUT system components via integrated locking cleats and features a 250 lbs. of weight capacity. An industrial-grade extension handle and 9 in. all-terrain wheels ensure the tool box can be rolled anywhere on the jobsite. An IP65 rated weather seal protects tools and accessories from rain and other jobsite debris. Interior organizer trays allow users to keep equipment organized to fit their needs. Reinforced hinges and carry handle ensure the rolling tool box is easily transportable wherever it is needed. The PACKOUT modular storage allows users to customize and build their own storage system to easily transport and organize tools and accessories.View Full Product Description

The TOUGHSYSTEM 2.0 Medium Tool Box has patentedThe TOUGHSYSTEM 2.0 Medium Tool Box has patented auto-connect side latches, allowing for 1 hand operation. It also has 2-piece metal wire front latches for added durability when securing tools inside of the box. This tool box offers 20% more tool storage when used with DWST08165 and DWST08450 as part of a tower. It is IP65 rated for dust and water resistance and has a 110 lbs. load capacity. The tool box has a removable inner tray for optimal organization. The ToughSystem 2.0 Tool Box is compatible with all TOUGHSYSTEM products.View Full Product Description