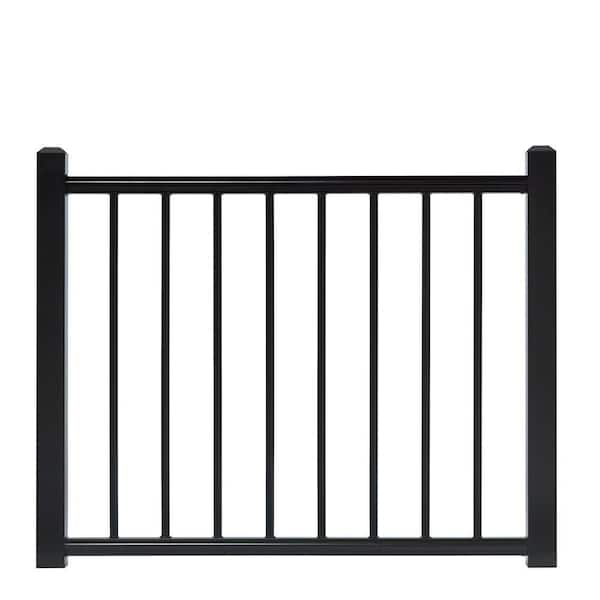 Enhance your decking area with the safety and style of a DeckoRail Aluminum Deck Gate. This 36 in. deck gate can be paired with most wood, vinyl, metal or composite decking components, keeping your little ones and pets safe and secure on your deck. Featuring TRU-CLOSE hinges, the spring-loaded adjuster allows for instant incremental tension adjustment.

The Gate Kit is designed to fit seamlesslyThe Gate Kit is designed to fit seamlessly with the Aria railing system and can be cut for proper width. The kit includes everything needed for installation including hinges and latching hardware. The Aria-Interlocking advantage uses a hidden fastener system to create a sturdy railing system that is textured, powder coated aluminum for beauty that lasts. There are no welds and assembly is fast and easy.See Full Product Description

The Peak Aluminum Railing system is designedThe Peak Aluminum Railing system is designed with an emphasis on style, durability and quality. Our patented railing system is engineered to be safe, DIY-friendly and easy to install. Made from powder-coated aluminum for low maintenance and lasting performance. Customize with standard or wide aluminum pickets, glass panels, decorative spacers and more. Available in black and white. Get beautiful, PRO quality results for any deck, patio, or balcony. The Picket Gate comes with everything you need to install a fully functional gate (fasteners, hinges and latch assembly). This gate is perfect for a classic and stylish look. The maximum gate opening is 46 inches and the removable posts allow the gate to be adjusted to fit narrower openings for your custom project. Step-by-step installation guides, videos and other resources are available to guide you through your installation.See Full Product Description

Original Rail is the cornerstone of the EnduranceOriginal Rail is the cornerstone of the Endurance product line. A complete railing system with options including square, turned, round metal, belly, glass balusters and glass panel. All may be coupled with a variety of accessory bracket kits that allow installation to any surface at any angle. Simple form and dependable function unite these rail designs to maintain safety without sacrificing the elegant presentation of your home or commercial space. No detail is too small and we've considered them all, down to the tamper-proof screw head covers. The vinyl-clad aluminum stiffeners provide strength and durability. The unique locking pin design ensures secure, invisible attachment of the aluminum back to the building structure.See Full Product Description