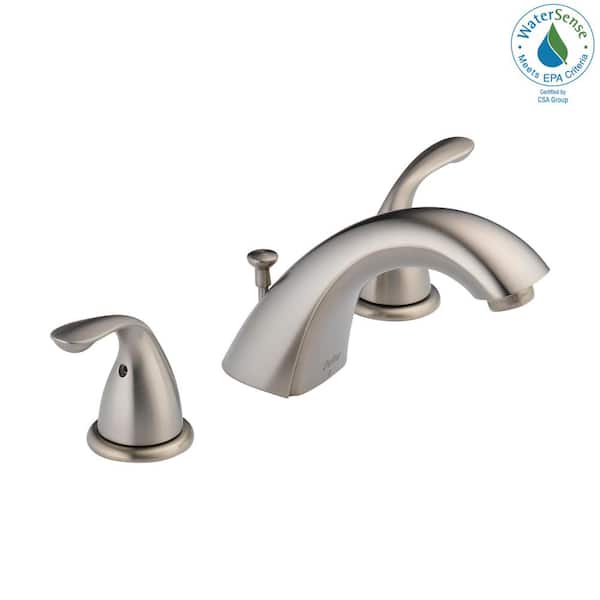 This Classic 8 in. 2-Handle Mid Arc Bathroom Faucet in Stainless has a timeless appeal, designed to complement any style of bath decor from traditional to contemporary. Getting ready in the morning is far from routine when you are surrounded by a bath that reflects your personal style. You can buy with confidence, knowing that Delta backs this faucet with a lifetime limited warranty.

Does this come in stainless? What valve assembly do I need?

Will this faucet also fit a 12 inch spread (per the attached picture)?

May 17, 2021
The dimensions were perfect, not too high above the sink...
The dimensions were perfect, not too high above the sink and extending well outward over the sink.
by MICHAEL
May 5, 2021
I had this faucet, but I couldn't install the identical faucet as a replacement
I own a condo in a building that was built in 2007. The faucet in my bathroom is the identical model to this one (different taps), and in 2019, I had to replace the stem assembly in the hot water tap because the faucet was dripping. That seemed to fix the problem until it started dripping again in 2020, when I replaced the stem assembly again. And then it started dripping yet again in 2021. The water in my neighborhood is pretty hard, and I figured that the faucet had reached end of life. So, the old Delta faucet had a 12-to-14 year run, which is pretty good. I thought I might replace my old Delta faucet with this one, which is actually the identical faucet, and new taps (though the plumbing inside the taps is the same - the handles just screw on top). However, it turned out that my boyfriend and I couldn't screw the nut under the faucet tightly enough to stabilize the faucet no matter which tool we tried! It always wobbled, no matter what. There just isn't much room between the sink basin and the wall under my bathroom sink to get in there. I'm guessing that the builders who installed the original faucet probably secured it before they mounted the basin to the counter. When I called a handyman about what to do, he told me to buy a Moen faucet instead, because the Moen kits come with a tool to tighten the nut under the faucet. So, I took out this Delta faucet, got my money back from Home Depot, and bought a Moen design that I liked. And the very first thing we did was tighten the Moen faucet so that it was stationary on the counter, which we had not been able to achieve with the Delta faucet. I even called up Delta HQ to complain about how we found it impossible to install, and there was nothing they could do about it. So, my old Delta faucet lasted a while, which speaks for its quality, but I could not install the identical faucet. Now I have a Moen faucet and it's great. I will not attempt to install a Delta faucet again.
by RadioactiveBanana
Response from DeltaFaucetMay 5, 2021
Hello, RadioactiveBanana. Thank you for taking the time to leave us your thoughts. I am sorry that this Delta Faucet 3550LF-MPU Classic 8 in. Widespread 2-Handle Bathroom Faucet with Metal Drain Assembly in Chrome did not meet your sink's installation requirements and apologize for any inconvenience that this may have caused. As the manufacturer, we are committed to supplying consumers with a quality product that delivers the expected performance. We appreciate your loyalty to Delta Faucet Company. Best Regards, Tim

The graceful arc and elegant detailing ofThe graceful arc and elegant detailing of this bathroom faucet from Delta recalls classic, traditional style in a timeless Stainless finish. Its high-arc spout provides exceptional clearance, while the dual handles offer total control over temperature and water flow. Delta is committed to supporting water conservation around the globe and has been recognized as WaterSense Manufacturer Partner of the Year in 2011, 2013, and 2014.See Full Product Description

The modern, angular Ara 8 in. 2-Handle WidespreadThe modern, angular Ara 8 in. 2-Handle Widespread High-Arc Bathroom Faucet with Channel Spout in Stainless brings a contemporary edge to any home. It's a full bath suite with matching accessories, making it easy to perfectly coordinate your space. Getting ready in the morning is far from routine when you are surrounded by a bath that reflects your personal style.See Full Product Description

The prismatic faceting of the Trillian BathThe prismatic faceting of the Trillian Bath Collection is an evolution of modern style that creates an edgy look which catches the light as well as the eye. Delta faucets with DIAMOND Seal Technology perform like new for life with a patented design which reduces leak points, is less hassle to install and lasts twice as long as the industry standard. You can install with confidence, knowing that Delta faucets are backed by our Lifetime Limited Warranty. Delta WaterSense labeled faucets, showers and toilets use at least 20% less water than the industry standard-saving you money without compromising performance. Industry standard is based on ASME A112.18.1 of 500,000 cycles.See Full Product Description

With sleek, angular lines and soft edges,With sleek, angular lines and soft edges, the Ashlyn 8 in. 2-Handle High Arc Bathroom Faucet in Stainless creates a modern appeal at an attractive price. Delta's exclusive DIAMOND Seal Technology uses a valve with a tough diamond coating. InnoFlex PEX waterways keep water inside the faucet out of contact with potential metal contaminants. This powerful combination brings you a faucet built to last up to five million uses. Installation is easier than ever with the EZ Anchor mounting assembly. Secure the faucet from above with no need to go below the deck. Mounts the faucet tightly to the deck, helping prevent the faucet from loosening over time. Easily installs on decks up to 2-1/2 in. thick, like granite or quartz. Whether you're a first timer just learning how to install a faucet or a seasoned installation professional who's done it a dozen times, save your back and your knees with the EZ Anchor mounting assembly. Delta is committed to supporting water conservation around the globe and has been recognized as WaterSense Manufacturer Partner of the Year in 2011 and 2013.See Full Product Description