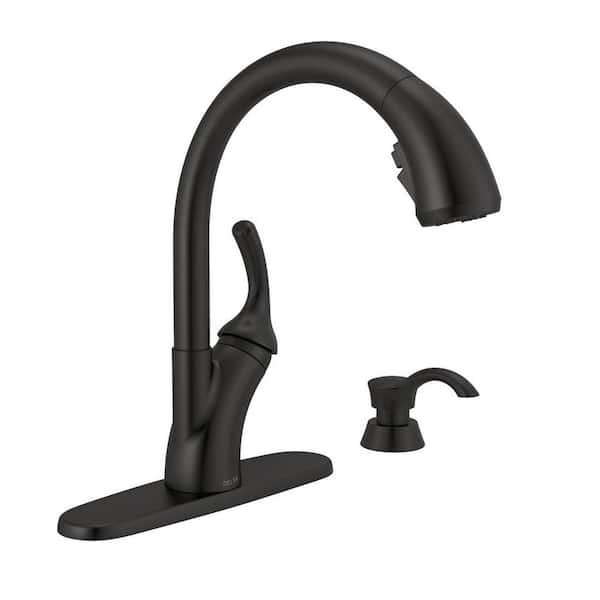 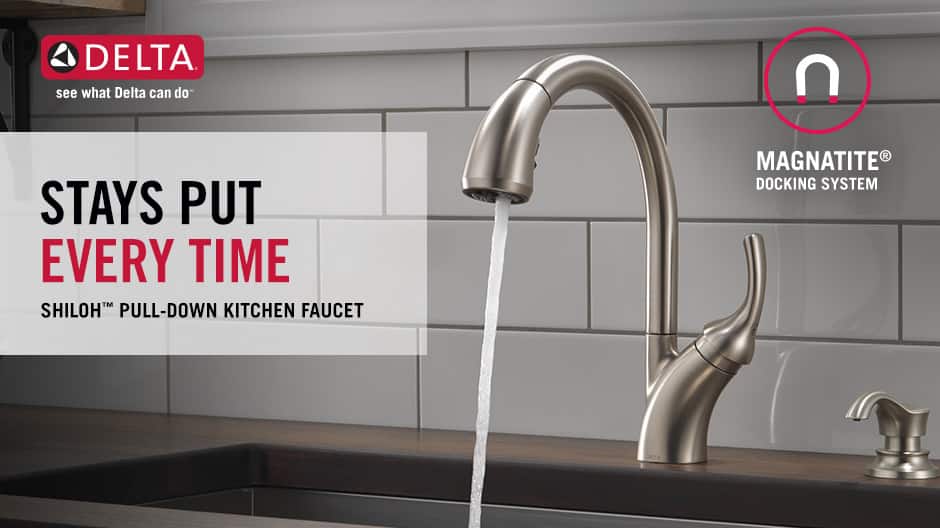 The Shiloh Kitchen Faucet's natural design lends an element of serenity to a busy kitchen, with organic, reaching curves and smooth, calming lines. 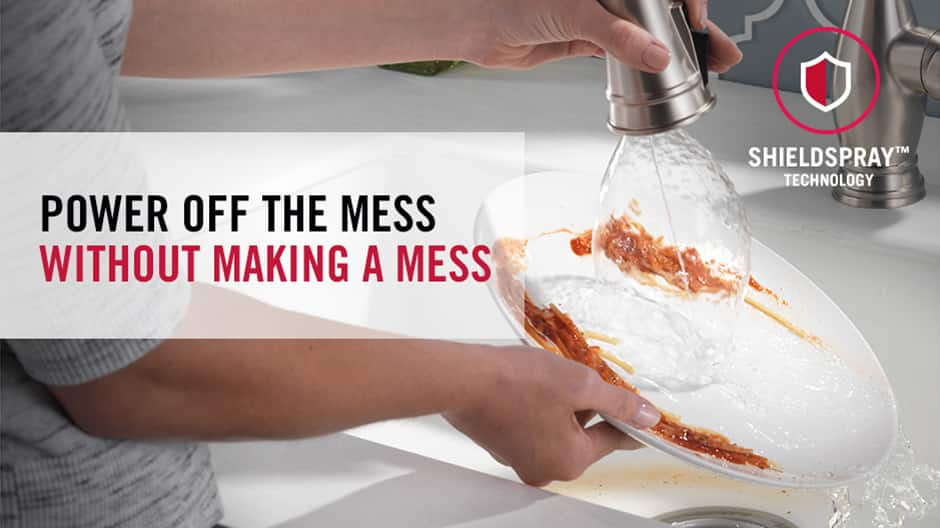 ShieldSpray Technology cuts through stubborn messes with a concentrated stream and reduces splatter with an innovative water shield, so you can power off the mess without making a bigger one.

Delta MagnaTite Docking uses a powerful integrated magnet to snap your faucet spray wand precisely into place and hold it there so it stays docked when not in use and doesn’t droop over time.

A powerful spray within a protective sphere of water clears away mess with an average of 90% less splatter than a standard spray. 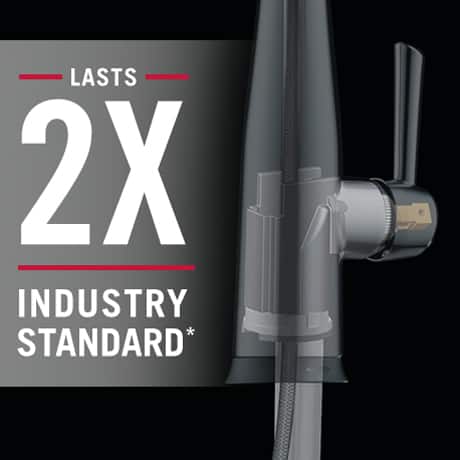 Delta faucets with DIAMOND Seal Technology perform like new for life with a patented design which reduces leak points, is less hassle to install and lasts twice as long as the industry standard*.

While other products may gather unsightly mineral build-up, the soft rubber spray holes allow mineral residue to simply be wiped away for an instantly refreshed look. 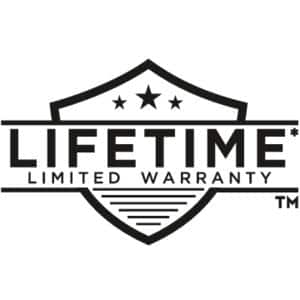 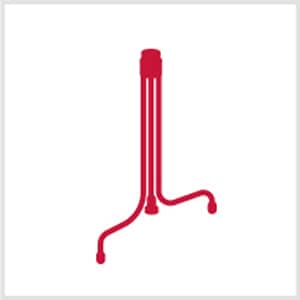 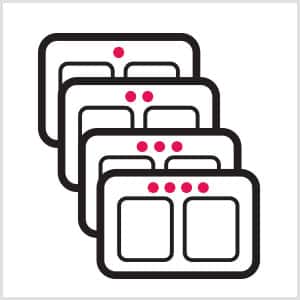 Easily and ergonomically switch from spray to stream to ShieldSpray Technology 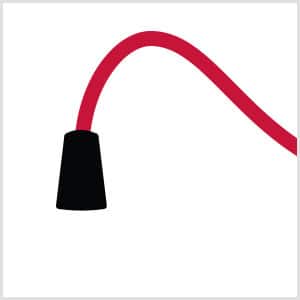 20-inch flexible hose for ease of use

Matching finish soap dispenser allows you to fill soap above the counter.

Delta ShieldSpray Technology cleans with laser-like precision while containing mess and splatter. A concentrated jet powers away stubborn messes while an innovative shield of water contains splatter and clears off the mess, so you can spend less time soaking, scrubbing and shirt swapping. Delta MagnaTite Docking uses a powerful integrated magnet to pull your faucet spray wand precisely into place and hold it there so it stays docked when not in use. Delta faucets with DIAMOND Seal Technology perform like new for life with a patented design which reduces leak points, is less hassle to install and lasts twice as long as the industry standard. You can install with confidence, knowing that Delta faucets are backed by our Lifetime Limited Warranty.

41
Filter by:
Showing 1-10 of 800 reviews
May 17, 2021
It’s a great faucet for what is worth, - I like that fingerprints don’t stay. - the different se...
It’s a great faucet for what is worth, - I like that fingerprints don’t stay. - the different settings of water are very useful. Overall I would definitely recommend this product
by
1 found this review helpful
Mar 18, 2021
Nice Look, Functional With a Few Minor Limitations, But Stains Way Too Easily
I really wanted to give this a better review. Initially I was wavering between three and four stars for reasons I'll mention in a moment. But after a month of normal use, the three-hole sink cover plate has developed two noticeable stains that even a soft scrub abrasive cleaner won't remove (see the accompanying picture). This is particularly disappointing since the 24 year-old sink, and the 16 year-old faucet this new one replaced, are both stain-free. As far as the faucet in general, the complaints about it and its siblings not turning off are overblown. Yes, to fully stop the water flow so it won't continue to drip or drizzle, you need to pay a small bit of attention when pushing the handle into the off position. But it quickly becomes second nature, and neither my wife nor I have any problems. Just push the lever toward the center of the faucet, and it basically auto-centers into the off position. Delta's novel splash guard was one of the reasons we opted for this particular faucet. It works fairly well, especially on flat surfaces like dishes. On irregular surfaces, it can still splash some, but not all that bad compared to the standard spray nozzle that it replaced. And it's surprising how much pressure the small stream in the center applies to the surface, which consequently does a great job of removing crusted-on food particles and such. Water pressure of this faucet is great, and for the more eco-conscious, it has the ability to adjust the stop on the handle to reduce the flow. (I had to actually physically modify some Glacier Bay kitchen faucets to remove the pressure limiters because it literally would take more than an hour to fill a kitchen sink.) I am a bit disappointed with the traditional sprayer pattern. In order to offer the varying types of sprays, the faucet no longer offers a normal 360 degree sprayer, but instead splits it into to halves with a gap in between. (I have a Delta bathroom shower head that does the same thing, and I really hate it.) This works, but I don't find it ideal, or even as effective as my prior faucet (that had the 360 degree sprayer). The optional cover plate used for three-hole sinks will be a problem. It does not fit flat against the sink, but bows up slightly at either end (possibly because the pressure is all at the center where the actual faucet goes through it). Consequently, water passes under these gaps, which eventually will build up minerals. You can see the problem in the accompanying picture. It would be nice to have a solid spacer in the center to keep it from compressing, which should prevent the edges from bowing up (assuming that's what the problem is, as opposed to poor manufacturing). Installation was quite straightforward, and the manual was adequate. There were two actual parts that I could not find described anywhere in the manual, so they were not used (one was a foam ring, and another was an odd blue plastic piece whose function I can't even guess). The faucet is quite nice looking, similar to a couple of Delta's other ones that we almost bought. The reason we ended up with this one was for a really subtle reason that I would suggest people consider: the loop of the faucet gave a center-to-end distance that was an inch shorter than some of Delta's similar faucets. We found this important because for our sink, the end of this faucet is ideally centered over the sink drain, significantly reducing splashing when running water to rinse dishes or bowls (or whatever). Other faucets would have directed the stream of water onto the flat part of the sink beyond the drain hole, causing it to splash a lot more unless we turned down the stream strength. So again, the warped cover plate and the sprayer not being a full 360 degrees had me wavering between three and four stars, and I likely would have given it the latter had it not been for the disappointing staining that the cover plate uniquely shows. Eventually, we'll be remodeling the kitchen and replacing the sink with a single hole version, so this plate will no longer be needed. But until then, it's a constant reminder of how easy it is to stain a supposedly stain-resistant finish.
by
Response from DeltaFaucetMar 22, 2021
Dear SteveB,

Thank you for contacting us. I apologize for the water spotting issue you are experiencing with your Delta Faucet model Single Handle Pull-Out Kitchen Faucet With Soap Dispenser And ShieldSpray® Technology and I am happy to help you.

Please contact us via email if you have any questions.

Refresh your kitchen decor with this BrecklynRefresh your kitchen decor with this Brecklyn Single-Handle Pull-Out Sprayer Kitchen Faucet with Power Clean in Spot Resist Stainless. The stainless-steel finish provides durability. It also helps prevent fingerprint smudges on the metal surface. Prepare for an easy installation process with the quick-connect design.View Full Product Description

The elegance of modern design is embodiedThe elegance of modern design is embodied in this Trinsic Single-Handle Pull-Out Sprayer Kitchen Faucet in Matte Black. Delta's exclusive DIAMOND Seal Technology uses a valve with a tough diamond coating to bring you a faucet built to last up to five million uses. Plus, it keeps water inside the faucet out of contact with potential metal contaminants.View Full Product Description

The majestic appearance of the Linden treeThe majestic appearance of the Linden tree inspired this Linden Single-Handle High Arc Waterfall Spout Pull-Out Sprayer Kitchen Faucet in Arctic Stainless Featuring Multi-Flow with a fresh design that will bring life to any kitchen. A toggle on a Multi-Flow wand increases the stream from the standard 1.5 GPM to a higher flow to more quickly fill the sink as well as pots, vases, or other large containers. Toggle back to 1.5 GPM for normal, everyday use. The innovative Multi-Flow feature can be found on a variety of Delta kitchen faucets. Delta's exclusive DIAMOND Seal Technology uses a valve with a tough diamond coating. InnoFlex PEX waterways keep water inside the faucet out of contact with potential metal contaminants. This powerful combination brings you a faucet built to last up to five million uses. Only Delta faucets are equipped with Touch-Clean soft, rubber nubbins that allow you to easily wipe away calcium and lime build-up with the touch of a finger. The included escutcheon completes the ensemble for a more finished look.View Full Product Description