Side Sprayer in Chrome 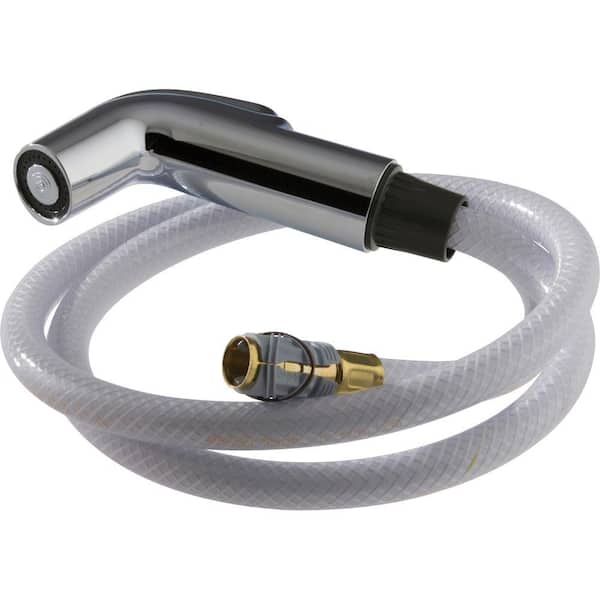 This Side Spray Hose and Spray Assembly in Chrome is an easy way to update the look of your kitchen. Its chrome finish was made to coordinate with all Delta kitchen faucet chrome finishes, so you can buy with confidence. As part of a company that delivers water every day through millions of faucets worldwide, Delta provides a lifetime limited warranty on all parts to the original consumer.

Thank you for your review! We are very happy to hear you are so satisfied with your Delta Faucet model RP39345SS Side Sprayer in Stainless! We greatly appreciate you taking the time to leave your feedback and your loyalty to Delta Faucet Company! Best Regards, Tim

Thank you for your review. We are glad that you enjoy your Delta side sprayer! We thank you for being a Delta customer.

Please contact us via email if you have any questions or need more information.

Thank you for your review! I do apologize you are not satisfied with your Delta model RP39345SS, but I will be happy to help further. Your feedback is important to us, as it helps us refine our products and services. Feel free to contact us directly, if you need further assistance.

Feb 26, 2020
Rating provided by a verified purchaser...
Rating provided by a verified purchaser
by
Nov 20, 2019
5 Star Review
Rating provided by a verified purchaser
by
Oct 3, 2019
4 Star Review
Rating provided by a verified purchaser
by
Aug 21, 2019
5 Star Review
Rating provided by a verified purchaser
by
May 14, 2019
The hand sprayer itself is good so far. I don't...
The hand sprayer itself is good so far. I don't understand why Delta would not put a better, more supple hose on this item! I would have gladly paid more money for a quality hose.
by
1 person found this helpful
Mar 28, 2019
Well, what can I say? It most certainly is, as described, a "side sprayer in chrome". Of course, ...
Well, what can I say? It most certainly is, as described, a "side sprayer in chrome". Of course, it was identical to the Delta side sprayer in chrome that I replaced; if memory serves, the leaking one lasted in the realm of 2 to 3 years since the last replacement sprayer was installed. I had anticipated it would last longer but what do I know? I almost opted to buy one of the "Danco" or "Glacier Bay" after market selections but I thought well, of course, the quality option would be to go with the "OEM" product. I was surprised to see that the package containing the side sprayer had no installation instructions nor was there any logo, trademark or any other marking which would designate the sprayer as a genuine "Delta" replacement part. The package contained the side sprayer with a hose and a modern looking attachment at the nipple end which consists of a plastic 2 piece squeeze activated clasp which is held together by sort of thin flexible retaining clip. In theory, you squeeze the clasp between your thumb and forefinger and just slip it over the nipple end (which is ridged or channeled, I suppose you would say) to receive the clasp. (You can see this clasp at the connecting end of the picture Home Depot uses in its image of the product). Also included is a tiny rubber o-ring sized to fit somewhere in the installation but, as previously stated, there were no instructions directing exactly how it was supposed to fit in with the rest of the assembly. For the next 2 days I tried every possible configuration of installing and re-installing this o-ring and making a connection but to no avail. I could make the connection securely but each and every time I turned on the water it leaked from the point of connection. In desperation (and I'm greatly ashamed to make this admission publicly) I called in a professional. I was delighted that it actually took the plumber about 25 minutes to get the thing properly installed; at one point he said aloud "If this doesn't work I'll have to call a priest". In the end he finally got the thing to work. What he told me was that there was an additional piece, I assume plastic, like a bushing (for lack of a better word) which was installed at the end of the hose at time of manufacture, which had to be REMOVED before the little rubber o-ring could be inserted. Now, a word of caution....since I ended up not actually doing the installation myself I can't vouch for the precise, exact method he finally used for inserting the o-ring, I'm just saying what he told me and he was a little vague. So, if you buy one of these and you're having some trouble like I was you just might want to consider dis-assembling your sprayer (connecting end) and trying to fit the o-ring behind whatever piece you're able to remove without breaking anything. Anyway, in the end it works just fine; you squeeze the handle while the water's running and water sprays out the business end. Still, I look at the thing and hold it in my hand and I feel as though this thing could be engineered to last a lifetime but I'm inclined to believe that in another 2 to 3 years from now, I'll be going thru this all again. I have absolutely no complaints with my "Delta" faucet; I've had it for years but regarding the sprayer, to the naked eye there was nothing wrong with the old one except water kept dribbling out of it whether the water was on or not......and this one is an exact replica....no refinements have been made. So this will be sprayer number 3 in about 10 or 12 years.....beyond that you'll have to draw your own conclusions.
by
Response from DeltaFaucetMar 13, 2020
Hello MistaBRad,

Thanks for the feedback. I am so sorry for the difficulty that you experienced with install your Delta side sprayer assembly. I am glad to hear that you were finally able to install this unit and the faucet is now fixed. Please feel free to call, email, or message us on social, if there is anything you need in the future.

Put water right at hand with this Spray,Put water right at hand with this Spray, Hose and Diverter Assembly in Stainless. Use it to clean veggies, wash off dirty dishes and return your sink to its gleaming best. As part of a company that delivers water every day through millions of faucets worldwide, Delta provides a lifetime limited warranty on all parts to the original consumer.See Full Product Description