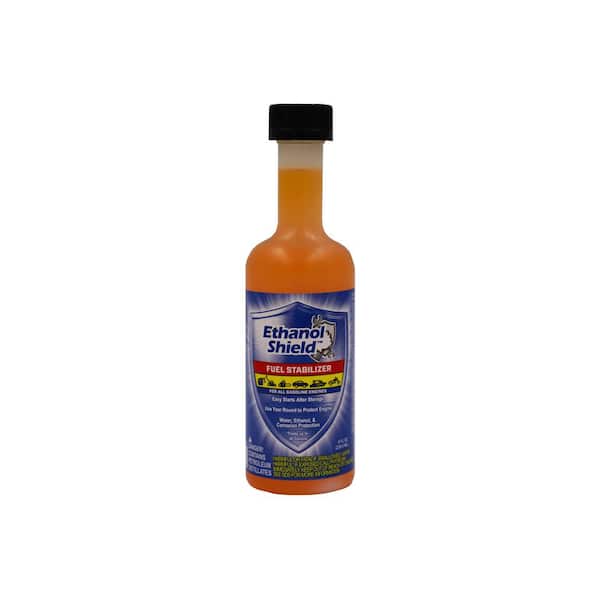 Can I mix with 2 cycle oil with gasoline

Yes not a problem

I use 2oz. ethanol shield per 5 gallons container.

I put a whole 2 Oz bottle of Ethanol Shield in a 2 gallon gas can. It's for a lawn mower. Is this going to mess up the motor?

What is the shelf life for this product ?

About the same as the shelf life for gasoline. One or two years shouldn't bother it at all. Forty years or more might give you a problem.

You can add just a little, if you desire, and in doing that, you can actually tteat up to 80 gallons. You can't over do it.. I dont measure, I just pour in a small amount.

Jul 2, 2016
Easy to use
Ethanol Shield fuel stabilizer says on the bottle “Protects 2 and 4-cycle engines from ethanol”. Ethanol is a fuel that comes from corn or sugar cane, a renewable resource, and it’s added to gasoline. The gas pump will say “Contains 10% ethanol” or “15% ethanol” in some Midwest states. Ethanol, like alcohol, will absorb water from the atmosphere and retain it, and this is hard on the carburetors of small engines. It’s also corrosive to fuel lines. I’m concerned with protecting my small engines — lawnmower, chainsaw, leaf blower, generator, from becoming gummed up with ethanol. Each time my lawn mower becomes gummed up it costs me about $100 to get it repaired at the lawn equipment service place. I have to schlep the mower to the repair shop and go pick it up a few days later. Of course the grass keeps growing while I wait for my repair. So protecting my lawn mower engine from the bad effects of ethanol is important to me. The Ethanol Shield bottle also says “Prevents repairs; Easy starting all year; Treats up to 80 gallons.” It comes in an 8 ounce bottle. The directions inform you that it treats 80 gallons for an automobile engine. For a lawnmower or other small engine the directions on Ethanol Shield say to mix two ounces of Ethanol Shield with five gallons of gas — thus the 8-ounce bottle will treat 20 gallons of gas and will last me for two seasons. The bottle has handy ounce measurements on the side — I have occasionally used kitchen measuring spoons for lawn mower additives, but this package has the measure on it. Using it is that simple: mix two ounces with a 5-gallon container of gas. I cannot comment now on how effective it is, for it will take me weeks, maybe months to learn. My hope is that I do not ever have another ethanol problem. Mechanic in a Bottle, which came with the Ethanol Shield, says on its bottle “Fix poor/non-running engines; revitalizes stale fuel; cleans carb, no removal; All 2 & 4 cycle engines; removes water; stops all ethanol issues; cleans carbon and varnish; reconditions rubber and plastic parts”. My lawnmower, a Troy-Bilt with an 8.5 horsepower Briggs & Stratton 4-cycle engine, would not start. It fired just a bit, but would not start. I’d had ethanol problems, and thought that was the present issue. I followed the directions on Mechanic in a Bottle for Non-Running Engines. I removed, with a kitchen baster, all the gasoline from the tank. I put the entire 4 ounces of Mechanic in a Bottle in the gas tank, and pulled the starter cord four times to suck some of the liquid into the carburetor. The engine fired a bit as it had before. “Starts working in as little as 15 minutes!” says the bottle. “For best results, let engine stand for at least four hours” says the bottle. I did that, and tried to start it. It fired for a bit longer than it had, about a full second, enticing me. “Severely contaminated fuel systems let stand overnight” says the bottle. I did that, and tried to start it. It fired a bit longer, about 1.5 seconds, tempting me. I let is stand for another 24 hours. It was still firing about 1.5 seconds, but not starting. Still another 24 hours yielded the same result. I took my mower to the repair shop where they dismantled the carburetor cleaning out the congealed ethanol, and charging me after yet another five days, $95. The man at the repair shop said “you had really old gas in the carburetor.” Summary: Mechanic in a Bottle worked a bit on my apparently severely contaminated carburetor, but not enough to start the engine.
by Peterh9