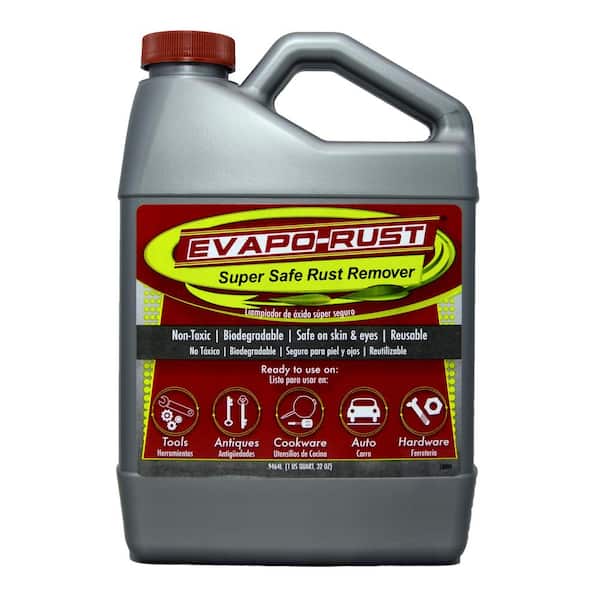 Evapo-Rust Rust Remover gives new life to all your rusty household items. Evapo-Rust is safe enough to use on any rusty item including cast iron cookware, grill grates, knives, antiques and anything metal. It features a non-toxic, environmentally safe, water-based formula that removes rust in just minutes, no scrubbing needed. Evapo-Rust is reusable, 1 gal. will remove 286 g of rust or will de-rust about 20 sq. ft., depending on the thickness of the rust. Evapo-Rust Removes even heavy rust completely, is non-toxic, non-corrosive, is safe on skin and eyes. Evapo-Rust has no fumes or bad odors, is non-flammable and can be disposed of safely by simply pouring down the drain in most areas. Evapo-Rust contains No acids, bases, solvents or other toxic ingredients, it will not harm un-rusted steel, safe on other metals, plastic, PVC, Viton and most paints. Uses include; cast iron cookware, grill grates, antiques, tools, auto parts, clocks, sewing machines, toys and more.

Manufacturer Warranty
All our products are guaranteed to work as described.

Can this be used to remove rust from a car frame befor under coating?

Yes you can. I poured it down the spark plug holes on my tractor to free up the engine, I left it alone for 5 days. The product is biodegradable as well.

Can Evapo Rust be to remove rust from concrete surfaces?

can this remove rust from tile

Can this product be used to remove rust from behind a mirror? The rust is starting to show throug...

Yes, this product can be used to remove rust from behind a mirror.

Can the metal be painted after using this product?

Absolutely, I washed the parts with soap and hot water (so it evaporates quick) then prepped with acetone to remove oils or dirt. Then I coated with self etching primer, sanding and tacking between coats. Allow primer time to dry then sand, tack and spray your color coat. It's all normal painting techniques for bare metal. It will flash rust after washing depending on humidity but that cleans up with scotch brite pads.

For the past 11 years, Sunnyside has beenFor the past 11 years, Sunnyside has been a manufacturer of safer paint and varnish removers, lead paint abatement products, and exceptional cleaning products. Our products are environmentally safe and contain no methylene chloride or other harsh, flammable, highly toxic solvents. Rust Remover is an environmentally friendly, water-based, biodegradable, non-flammable remover of rust spots and stains. Rust is the result of a chemical process called oxidation and can stain anything it touches. Rust Remover is non-corrosive and does not contain phosphoric or hydrochloric acid. It removes most rust spots and stains from interior and exterior surfaces including concrete, toilets, sinks, bathtubs, appliances, clothing, upholstery, metal, wrought iron, house siding, sporting goods, and more.See Full Product Description

NPS Rx Natural Paint Stripper is an environmentallyNPS Rx Natural Paint Stripper is an environmentally friendly, biodegradable, low odor paint stripper designed to remove multiple layers of various types of coatings. NPS Rx performs by penetrating and softening the paint film. The all natural and biodegradable characteristics make NPS Rx safe, easy to use and practical for most stripping applications. NPS Rx will not damage tools and equipment like most chemical strippers.See Full Product Description

America's No. 1 selling remover comes inAmerica's No. 1 selling remover comes in a semi-paste formula that improves cling, making it ideal for vertical or rounded surfaces. Powerful cutting action penetrates deeper, stripping several layers at a time without damaging wood or metal. Recommended for latex and oil-base paints, varnish and lacquers. Surfaces can be cleaned using a scraper and/or water wash-off method. Strypeeze is recommended for outdoor use. Extremely Flammable.See Full Product Description