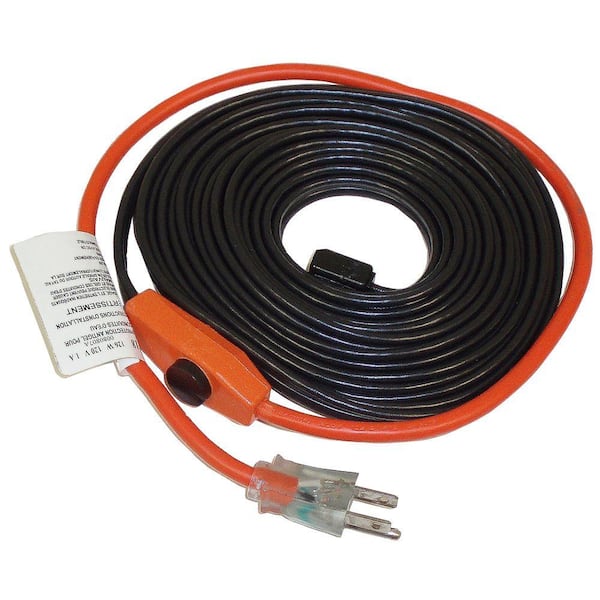 The Thermwell 30 ft. Automatic Electric Heat Cable Kit is designed for use on metal and plastic water pipes to help prevent the pipes from freezing. This kit has a built-in thermostat. It comes pre-assembled for easy installation.

26
Filter by:
Showing 1-10 of 210 reviews
Nov 18, 2020
Fig tree
I’m in NJ. I use the heat tape to keep my fig tree frost-free in the winter.
by
3 people found this helpful
Feb 19, 2019
I installed this last winter and it failed the very next winter causing my pipes to freeze.
I installed this last winter and it failed the very next winter causing my pipes to freeze.
by
4 people found this helpful
Mar 8, 2016
Works in gutters too!
Contrary to what the Home Depot employees will tell you, this item can be used in a gutter. The manufacturer confirms this on the Home Depot Q&A section. It works well to eliminate ice dams in gutters. I only plug the cable in when needed and has lasted all winter.
by
14 people found this helpful
Feb 18, 2015
Great heat!!
Used this to prevent bulk rock salt from freezing in salt spreader. ( Not designed use) bulk salt if moist will freeze in single digits rendering salt useless when needed most. In stead of having to break apart and shovel out of hopper I can leave it in for frequent snow storms. Kept salt from freezing last night when it got down to -5f. Same salt froze in my loader bucket. Bottom line if it can do this it will work for your pipes.
by
7 people found this helpful
Nov 16, 2021
by
Nov 11, 2021
Works great so far. Pipes haven't froze....
Works great so far. Pipes haven't froze.
by
Oct 31, 2021
Worked great.
Should have double checked my measurements. It was a bit longer than I thought.
by
Oct 25, 2021
Rating provided by a verified purchaser...
Rating provided by a verified purchaser
by
Oct 4, 2021
Did not work.
I bought the roofing cable in the late summer. I followed instructions to a "T" including rolling out the cable in a straight line, plugging it in to make sure it heated up. Honestly this was difficult to tell in the summer laying on the black driveway . Holding it my hand it felt warm, knowing it probably wouldn't feel hot due to possibly starting a fire if they manufactured it to heat up that hot. I installed it per directions making sure not to have it touch itself. Here in lies the problem. It was several months later that I had ice on the roof and plugged it in to use it. It didn't and doesn't work. Far too long of time had passed to return it. My rating would be a Zero. The rating on something like this should be a Pass/Fail. If it doesn't work it Fails period. Total waste of $65 and 2 hours of time. The more I thought about, I think they know they problems with this product, otherwise why would they have you test it before you install it.
by
Apr 21, 2021
by
Showing 1-10 of 210 reviews