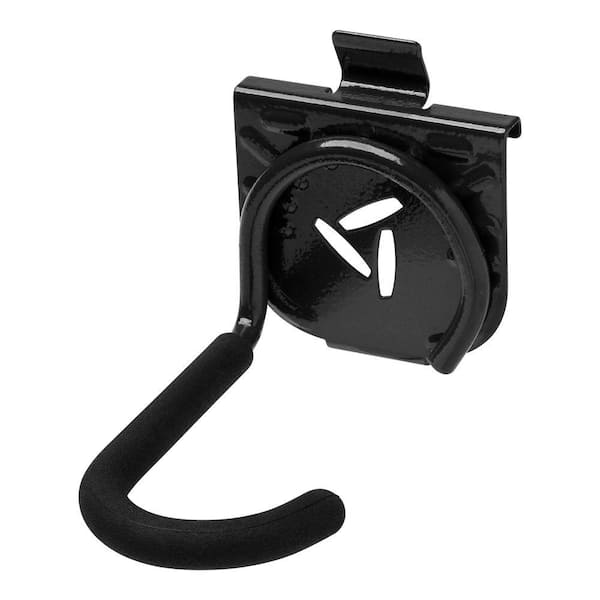 Bike storage is made easy with the Gladiator Vertical Bike Hook. It lets you store adult or child-sized bikes securely on the wall. Designed for use on Gladiator GearTrack channels and GearWall panels, it can be hung easily, and repositioned effortlessly, as often as needed. A lifetime limited warranty provides peace-of-mind that this durable bike hook is built-to-last.

Which product would be best for hanging a Whiz Wheel recumbent ("Terra Trike") trike? They have t...

Hello wijram, the Gladiator vertical bike hook only holds up to 30 lbs. The model GAWUXXCPVK - Advanced Bike Storage v3.0 will hold up to 50 lbs.

how long of a track do I need to hang four adult bikes and still allow for easy removal of a bike?

While you can hang 4 bikes on a 4' section of GearTrack, it will be a tight fit and you will have to alternate hanging them by front wheel, then back wheel. With the 8' 2-pack of track you will have plenty of room to hang other stuff like a bike pump, etc.

No, not really. The GearTrack is the way to go for a neat and inexpensive installation. Plus, you will have room to add more hooks for other things.

7
Filter by:
Showing 1-10 of 68 reviews
Aug 9, 2020
Amazing bike storage...with two major flaws
[This review was collected as part of a promotion.] Of the all the of new Whirlpool Gladiator GearTack hooks I purchased recently the Vertical Bike Hook was the one I was most for looking forward to using. Up until now, my family members have been storing their bikes either leaned up against the garage wall, or unceremoniously dumped in the front yard. And it's only when dad's on a garage organizing tirade do the bikes actually get put away which has meant hanging them from the old stand-by red ceiling mounted hooks; the only problem with that is that dad (me) is the only one tall enough to get the bikes back down from the ceiling, which, with a car or other stuff stored in the garage is easier said than done (especially if the kids ask me to get the bikes up and down multiple times a day). So when I saw the Vertical Bike Hook from Gladiator, I thought here was a bike hook that would easily mount to my Gladiator GearTrack Panel which is about 6' off the garage floor, which is just about the perfect height to wheel a (full-sized) bicycle right up to on it's rear wheel and hook in place, and so now my kids and spouse can easily put their own bikes away, right?! But, while it's true that it has made it easier for the rest of my family to put their own bikes away, it turns out there's two big flaws with the Vertical Bike Hook: The first problem is that I find that when either putting the bike into the hook or taking it out, the slightest contact between the bike tire and the hook ends up knocking the hook out of the GearTrack panel every time (yes EVERY time). This makes it very difficult for a person to mount or unmount the bike by themselves, which defeats one of the chief reasons for having purchased the hook in the first place. And the second, and more damning problem I’ve found, is that after using the hook for only about two weeks, the rubber covering on the curved portion of the hook has broken through and exposed the sharp metal end underneath which was then poking right into the sidewall of the bike tire! It didn’t puncture the sidewall, but I didn’t realize until after the fact that it left a huge scrape in the rubber and with repeated use I’m sure would eventually break through. The same thing happened with all the other bikes I tried, with the exception of my road bike whose tires are skinny enough to not contact the hook in a dangerous way. But, I couldn’t risk the potential of further damaging any of the other bikes and had to discontinue using Vertical Bike Hook as soon as I realized the issue (see photos). So, in my estimation the Vertical Bike Hook is a great idea in theory, but with some poor performance features in the real world. My recommendation to Gladiator is that the Vertical Bike Hook be redesigned so that instead of having a shape like Captain Hook’s, well, hook, it instead be made into an “L” shape to accommodate a wider variety of bike tire sizes without the potential to damage the bike tire; and secondly that it be made to attach more securely in the gear track panel so as to not be knocked loose upon contact with the bike tire. If Gladiator can make those changes, then I’ll be “hooked” (sorry, couldn’t resist the dad joke).
by Mountain-Man

Customer review from gladiatorgarageworks.com
Aug 9, 2020
Not in Love like I want to be
[This review was collected as part of a promotion.] I really wanted to love this bike hook. I could not get my bike to hang correctly. I hangs just like it does on the regular bike hook. It could easily be user error. Also I don't need anything else coming out into the garage I would prefer the bike stay against the wall.
by Scbr4

Customer review from gladiatorgarageworks.com
Aug 5, 2020
Hang on
[This review was collected as part of a promotion.] This hook works perfectly as prescribed. The bike hangs well on the wall and I like the design of the hook opening, it allows for easier hanging and removal of the bike without having to wrestle it off the wall.
by Ink Shink

Customer review from gladiatorgarageworks.com
Dec 25, 2020
Could be 5 Stars
I have a 2.6” wide tire 29er Trail bike and while the hook just barely manages to fit it, it provides a really poor user experience due to the bracket constantly unseating from the slotted wall mount system due to the jostling to get the rim seated. While the rack easily accommodates my older 26er with 2.4” tires and works great for that purpose, trends are definitely moving towards larger tires and this design should be updated or another size could be offered for more ‘modern’ bikes (e-Bike, mountain/trail bikes with 29er/27.5+) while the existing option would be a fine option for BMX, DJ, Kids’ and Classic 26er Mountain and Road Bikes. Aside from sizing, as I mentioned it works well on my older bike and for the money it’s an excellent value. Affordable and easy although you have to make sure you have adequate space in a fairly open area as the bikes lay ‘up’ in file so the bikes store out from the wall a little ways. I mounted a cork board under the Gladiator racking to protect the drywall. With an option for a larger wheeled modern bike that would provide a better user experience, this is easily a 5 star accessory for a fairly affordable rack system with a lot of other options. But since it doesn’t exist as far as I am aware, I give it a 3 star rating because it’s technically functional with a poor user experience for those who are using more contemporary bikes. If they make a larger size, I would definitely buy /recommend but I can’t recommend to users with modern larger diameter wheels with wider tires at this one size available. If it’s a little BMX or older ‘classic’ bike, road bike with skinny tires, etc. it’s an affordable option that beats leaning your bike against things when storing and holds it securely when the bracket stays seated in the wall mount slots
by NRSTX

Customer review from gladiatorgarageworks.com
Nov 29, 2020
Sturdy Bike Hook
[This review was collected as part of a promotion.] Works great in our small condo space to keep bike off ground. Looking to purchase for entire building as a way to make room. Easy to take bike up and off wall. Looks clean with the rest of our gear track system.
by chicagosarah

Customer review from gladiatorgarageworks.com
Nov 20, 2020
Without bike hook.
It never showed up but they ask me to review??????
by Without ball caddy
Response from Gladiator PROSNov 30, 2020
Dear Customer: We sincerely apologize for the confusion. We are currently experiencing shipping and inventory delays due to increased order volume and extra safety precautions taken during this time. Our team is working hard to ensure the delivery of your Vertical Bike Hook. We appreciate your patience and understanding during this time.

Bike storage is made easy with the GladiatorBike storage is made easy with the Gladiator Horizontal Bike Hook. It lets you store adult and child-sized bikes parallel to the wall and the 14.25 in. long arm rotates 180 degrees, so it can lay flat when it is not in use. A lifetime limited warranty provides peace-of-mind that this durable bike hook is built-to-last.See Full Product Description

30 in. W x 15 in. D Ventilated Shoe Shelf for GearTrack or GearWall

This Gladiator Ventilated Shoe Shelf providesThis Gladiator Ventilated Shoe Shelf provides a storage solution for keeping in-line stakes, athletic shoes, garden clogs and more off the floor and out of your way. You can easily reposition this shelf on any Gladiator Wall System to accommodate your ever-changing storage needs. You don't even need any tools to do so.See Full Product Description

Storability modular wall storage is the idealStorability modular wall storage is the ideal way to store and organize unlimited types of large and heavy items securely on a wall in the maintenance room, factory, shop or any area that requires heavy-duty and dependable storage solutions. Storability offers the broadest choice of accessories to accommodate hard to store items that goes well beyond lightweight and traditional wire shelf storage currently available. Storability offers many modular accessory styles that each mount to the Storability frame system to keep your hard to store items organized. Each accessory item is easy to install and provides more ways to store items than ever. All Storability accessory storage items lock on to the frame to keep them in place and will never fall off when your items are being removed or returned to their place. Each Storability modular wall accessory is easily removed and repositioned on the frame in seconds as requirements change. Customize your expandable system at any time.See Full Product Description