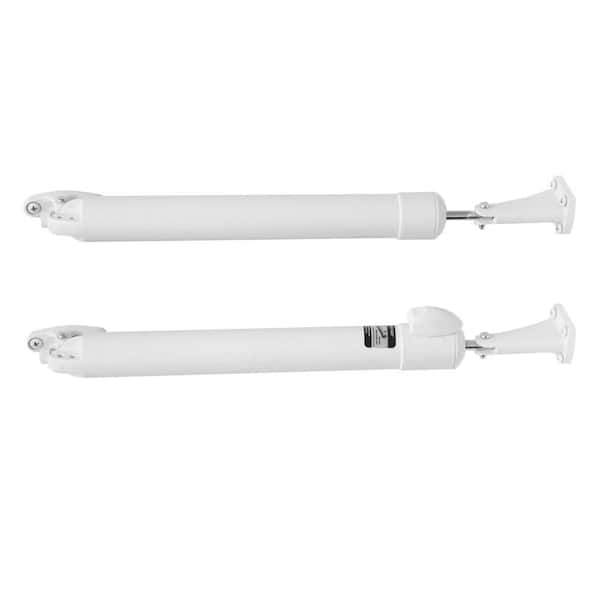 This two-closer kit is recommended for heavier full-view storm doors with glass inserts. Kit comes with one push-button closer and one non-button closer. Both pneumatic closers have a smooth closing motion similar to hydraulic closers without the mess and the cost. Convenient push-button technology means a simple tap with a foot, elbow, or finger will hold the door in any open position you want. No hands required.

Thanks for your question. We offer the support closer (without the button) as part of our Top & Bottom Dual Kit. It is not available à la carte. We hope this information is helpful One more thing to note. It is perfectly fine to use two touch button closers on the same door. You would only need to tap one button to hold the door open. The other one will operate the same way as the non-button closer. Thanks, -- CT Greenstar Technical Team Touch n' Hold | www.touchnhold.com

What is the max weight that these can hold? Can they be used to hold open a vertical (closed) to...

Hi there! Thanks for your question. Yes, our closers are designed to be able to fit on a Pella Storm door. If you are replacing an older closer, there's a chance that you will have to change out the bracet hardware, but other than that the Touch n Hold should be complete compatible.

Can the extension be extened to open the door wider?

Hi there! Thanks for your question. Our closers measure 14" from bracket-to-bracket and the pneumatic cylinder is 12" in length and 1 1/4" in diameter.

Will this replace the same unit made by Anderson?

Hi Tom, Yes. This closer is a good replacement for the Andersen closer. You should even be able to use your existing brackets from Andersen. We just recommend that you adjust the door bracket position when you install the Touch 'n Hold. Use the yellow installation spacer that comes with the Touch 'n Hold and simply slide your door bracket so that everything is positioned correctly.

We will this item I?

Hi Ell, It looks like your question got cut off. How can we help?

I need a replacement that is 13" from hole to hole to fit the broken existing one I bought from y...

Are these beefy enough to be utilized with a steel security door?

that is what I bought it for.... I would say it is marginal, would not take rough treatment, but there seems to be little else available at an affordable price.... jd

11
Filter by:
Showing 1-10 of 183 reviews
Aug 16, 2016
Touch n Hold door closer
The product is great ! The customer service is non-existent. They sent the wrong color product, except for one small part. The customer service number never answered after at least a dozen calls. Only way to get through to anyone is to call their purchase line. I sent them several emails they requested with pictures and descriptions to no avail. Only place to buy this product. Would never deal with this company ever again.
by Woody

Dec 4, 2015
Faulty hardware damaged an expensive entry door! Do not buy.
This kit is a nightmare. I strongly advise against purchasing it. My second set of plastic mounting brackets just broke, so I am in the market for a new system. I initially had this installed by a contractor when he was installing my new door. Everything looked great for the first few months. I had purchased a brand new hard wood door with beautiful grain, had it stained and glossed, purchased a clear glass storm door that would show off my brand new door, and figured I would get these "heavy duty" pulls. They are "heavy duty" to the extent that they slam your storm door when you let it go, even with just one of the pulls installed. They are not heavy duty to the extent that the plastic mounting hardware LOVES to break. My first issue arose when FedEx decided to leave a package behind the my storm door. I guess they didn't want the door to slam, so they let it closely lightly and it didn't latch. The first gust of wind that could grab the door blasted it open and snapped both mounting brackets, leaving a nice jagged plastic shiv on the end of the tension rod. By the time I got to the door, the plastic shard had gouged multiple fissures into my hardwood door. I called Greenstar, as the plastic mounting hardware cannot be found separately, and explained my plight. They apologized for the inconvenience and set me up with replacement parts that wouldn't be available for a few weeks and I waited. New parts arrived and installed easily, but it became apparent that the accident had left a nick on the actual extension arm of the pull and it would sometimes lock open on its own. I found some online help that suggested I spin the rod and place the nick in a location that would not engage the lock....done. Fast forward two years. I came home yesterday to find my door swinging wildly. Second set of plastic hardware was destroyed and there were nice new additions to my hardwood door again. Forget this thing. Go with something that will stay screwed to your jamb.
by Brian

3 people found this helpful
Jun 3, 2014
just what the doctor order
I was a little nervous with the closers being made of plastic, but after 10 min to install and one adjustment, I was impressed. Time will tell if the plastic holds up.
by mrT2

2 people found this helpful
Mar 6, 2013
Easy application and great features.
My experience working with the online and on phone associates were excellent. The associates gave me many different options before I made the decision to purchase this product. The product comes in different colors which made my decision a lot easier. The application of the product was very simple and easy to install. Finally the product was shipped to my satisfaction and on time. Thank you so much the great service and excellent product.
by xyz1234