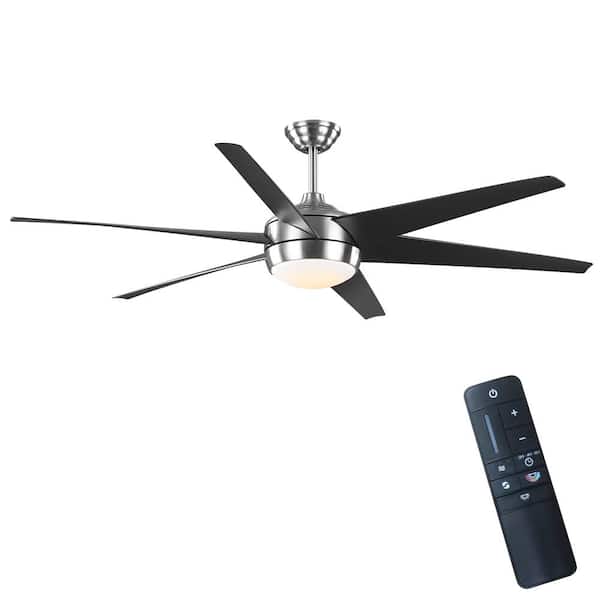 Modern styling and energy efficiency make the 68 in. Windward ceiling fan the perfect choice for any large room application. The Home Decorators Collection took the Windward IV and created a larger version with more features. The integrated 20-Watt LED module is dimmable and allows you to select between 3 color temperature settings - warm white (2700K), soft white (3000K), and daylight (5000K). This damp rated fan is perfect for use in covered outdoor locations like porches and patios. DC motor fans are 70% more energy efficient than AC motor fans (when comparing efficiency (CFM/W) of DC vs AC motors in published FTC Energy Guides for ceiling fans).

Perfect for your covered patio or livingPerfect for your covered patio or living room, this 52 in. Merwry Matte Black Indoor/Outdoor Ceiling Fan is a great addition to your home's cooling needs. Each fan features a 9-speed motor that has a reversible fan direction for both winter and summer use. The silver blades and a frosted opal glass dome light kit is sure to accent any home decor. Includes a handheld remote that allows you to customize your airflow and light level. DC motor fans are 70% more energy efficient than AC motor fans (when comparing efficiency (CFM/W) of DC vs AC motors in published FTC Energy Guides for ceiling fans).View Full Product Description