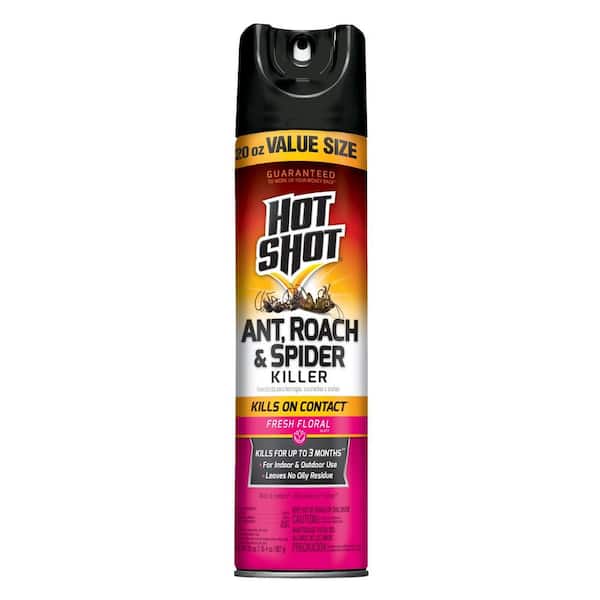 From the carpool to the couch cushions, you're the CEO of the home front. Take care of your family and take care of business, no matter where household pests rear their ugly heads. Show bugs who's boss with Hot Shot insecticides. They're your weapon of choice, giving you the clear advantage within your walls and at the bank. With faster knockdown than ever before, Hot Shot Ant, Roach and Spider Killer is our strongest formula yet. This fresh floral-scented formula kills insects on contact and keeps killing for up to 3-months. Use indoors and outdoors to kill ants, cockroaches, spiders, fleas, crickets, Asian ladybeetles, stink bugs, palmetto bugs and water bugs. Indoors this product can be used as a spot treatment along and behind baseboards, around and beneath appliances, beneath and behind sinks - without leaving behind an oily residue. Other areas where insects are often found include in cracks and crevices, around pipes and plumbing, around waste containers and in dark corners of rooms, cabinets and closets. Excluding harvester ants. On non-porous surfaces, excluding spiders, fleas and carpenter, pharaoh and fire ants.

4
Filter by:
Showing 1-10 of 264 reviews
Dec 22, 2021
Doesn’t kill on contact
This bug spray has a wide nasal which means you have to spray multiple times just to kill it. Once you spray, the bug doesn’t die, it just makes it fly away. This isn’t what I was looking for, I need something to kill the bug directly on impact.
by
Response from HotShotProductExpertDec 27, 2021
Hi TeeKay, thank you for providing your feedback regarding our thank you for providing your feedback regarding our Hot Shot 20 oz. Ant Roach and Spider Fresh Floral . We're sorry to hear that the product didn't provide the expected results. The satisfaction of our consumers is very important to us. Please contact us at 1-800-917-5438 or email us at youropinioncounts@spectrumbrands.com so that we may better assist you. When contacting us back please refer to case number 1823840.
1 found this review helpful
Nov 29, 2021
Works great
[This review was collected as part of a promotion.] I'm really enjoying the hot shot ant roach and spider killer kills on contact fragrance free kills up to 3 months for indoor and outdoor use leaves no only residue and it's guaranteed to work or your money back. We have spiders in the stuff really does work it is good and the guarantee is right it works so I really like using it and I like that there's no oily after residue
by

Customer review from Hotshot
Nov 20, 2021
Effective and Fast
[This review was collected as part of a promotion.] HOT SHOT is a well known and trusted brand. Our family has bought and used this brand successfully for years. Ranch life brings unwanted pests. It’s not only annoying to deal with them but quite painful sometimes. Hot Shot ant, roach and spider killer effectively works to rid your living space of these pesky uninvited bugs. It’s scent free but most importantly kills on contact. I spray, they’re dead, so no jumping on furniture screaming my lungs out. Thank You!
by

Customer review from Hotshot
Nov 18, 2021
Works good!
[This review was collected as part of a promotion.] I used the non-scented spray and surprisingly enough it did not have a scent! Unheard of! I use it around the front porch and door, the back porch and in the corners of the fence where I have an issue with spiders. First spray and a spider popped out from the corner, sprayed him once and that was all it took. Since then I have not seen any other spiders return to that corner and that was two weeks ago. Usually they are right back within a few days. The spray comes out in a fine mist and doesn't leave any oily stinky stains. Quality product that gets the job done.
by

Customer review from Hotshot
Nov 15, 2021
Extremely effective
[This review was collected as part of a promotion.] I was very impressed with this Hot Shot Ant, Roach and Spider Killer. My husband just got a big metal shed built in our backyard and for some reason that really made all the bugs come out. I was having an issue with ants and roaches outside of my house and this bug spray took care of that immediately. When it says kills on contact on the can it isnt joking. Any ant or roach I sprayed it on died pretty much instantly. I also used it inside my house around my baseboards and under my kitchen appliances because I do occasionally have roaches and spiders in those areas. I haven't seen any bugs at all after spraying those areas. I am genuinely impressed with this bug spray and will be purchasing it again.
by

Customer review from Hotshot
Nov 14, 2021
Hot Shot Ant, Roach. & Spider Killer
[This review was collected as part of a promotion.] Lemon scent hot shot ant, roach, & spider kills on contact. Works great - I used it around all my door ways & kitchen. Doesn’t leave residue! It can used indoors or out. This particular can is 17.5oz. A can covered my inside & outside of house. I live in Mississippi so we do tree roaches that sneak in after a rain. Comes with a guarantee to work or your money back- which is always a good thing.
by

Customer review from Hotshot
Nov 13, 2021
This stuff works!
[This review was collected as part of a promotion.] I have been dealing with cockroaches for months now. My usual product stopped working. I sprayed some of this in the crevice of the refrigerator and cupboard. Immediately, a full size cockroach and some babies came out. This stuff killed them fast and I love that this lasts for 3 months! I have sprayed it along the baseboards in the kitchen and have not seen one since. I also have an ant problem on occasion and have not seen ants either. This stuff is impressive!
by

Customer review from Hotshot
Nov 13, 2021
Kills spiders instantly
[This review was collected as part of a promotion.] When the pandemic was keeping everyone home and socially distanced, we decided to make a beautiful outdoor living room so we could see our friends in a safer environment. This worked GREAT but the downside has been spiders also seem to find my new outdoor lounge to be very cozy. Hot Shot has worked great to get rid of any uninvited eight legged guests to the party. When I spray it, they die, it’s that simple!! And I absolutely LOVE that it does not smell as terrible as some other name brand poisons that I have tried. There is one corner behind my couch that spiders just seem to looooooove, so I will spray that corner even if I don’t see any!!! And sure enough, a few always fall out! I would highly recommend!
by

Customer review from Hotshot
Nov 11, 2021
No scent
[This review was collected as part of a promotion.] Been testing it for a while in the front gardening of my house. Once you spray the hot shot you couldn't smell anything. I put my nose like 2 or 3 inch close to the surface of spray and couldn't smell anything. Then spray it on a insect and in a couple of second it was dead. Overall this products did what it said it will do.
by

Customer review from Hotshot
Nov 7, 2021
It really works
[This review was collected as part of a promotion.] Cockroaches started to appear in my kitchen not so long ago but after using it I saw them running and stopping dead on their tracks. It works really well and I haven’t seen any of them live. 10/10 would recommend does the job.
by

Don't just kills bugs; create a bug barrierDon't just kills bugs; create a bug barrier with Ortho Home Defense Insect Killer for Indoor & Perimeter2 Ready-to-Use. Whether you have ants, spiders, roaches or other home-invading insects, you can count on Ortho to keep them out. Simply spray Ortho Home Defense around the perimeter of your home foundation to protect your home for up to 12 months.View Full Product Description

Protect yourself from an array of creepyProtect yourself from an array of creepy crawlers, including the black widow with Terro long-lasting spider killer spray. With dual protection, Terro Spider Killer provides instant knockdown and delivers long-lasting residual repellency for up to 6 weeks. This product is also effective against ants, cockroaches, scorpions, ticks, silverfish, Asian lady beetles and bedbugs.View Full Product Description