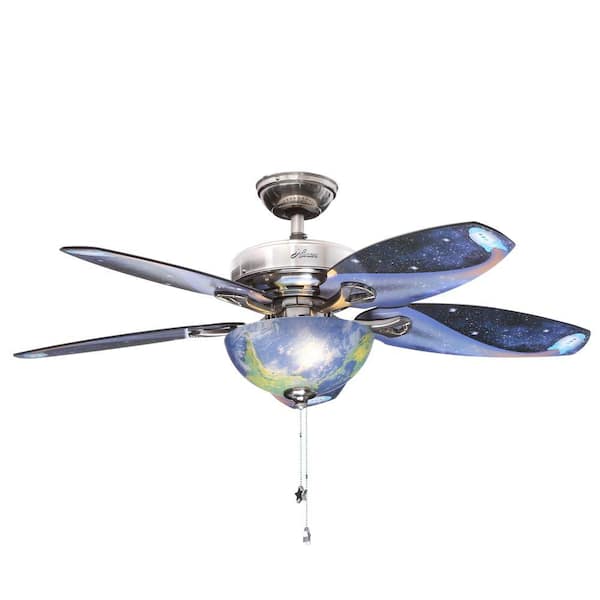 The Hampton Bay Harper III 44 in. CeilingThe Hampton Bay Harper III 44 in. Ceiling Fan is perfect for a little girl's room with its flower blade arms. The reversible pink/purple blades will provide a choice depending on her favorite color. The bowl style light kit in frosted glass completes this juvenile fan. Also includes QuickFit features that will make this fan easier and quicker to install.View Full Product Description

The beauty of stained glass in a functionalThe beauty of stained glass in a functional ceiling fan! Illuminate your home in style and comfort with this ceiling fan featuring one of our favorite patterns. Six lights highlight the 334 total glass cuts and bring shine to the 33 cabochons. Swirls of striated and rippled glass encircle the center components. Each glass cut has been soldered together using the copper foil method, made famous by Louis Comfort Tiffany in the early 1900s. Every piece of glass is unique in color, so variations may occur making each style special. Five wood grain-textured blades are included with black on one side, and mahogany on the other for reversible color options. Pull chain switches allow for manual power off/on, light operation, and three-speed motor (reversible) . A short 4" down rod and longer 21" down rod are included for two display options, as well as flush mount. Includes: Two (2) dimmable E12 LED 6W/40W incandescent equivalent and Four (4) dimmable E12 LED 1W/15W incandescent equivalent warm white light bulbs. This item must be hardwired and installed by a qualified electrician.View Full Product Description

Regarded as one of our best ceiling fansRegarded as one of our best ceiling fans by designers and homeowners alike, the renewed classic look of a Bennett ceiling fan will add flair to your traditional living spaces. A smoked yet clear open glass globe completes this fan's harmonious color palette while adding a touch of glamour. Whether you like your light moody or as bright as possible, the energy-efficient LED Edison bulbs enhance the ambiance of your room while a powerful WhisperWind motor will make your formal, chic spaces as functional as they are stylish.View Full Product Description

The Beck modern ceiling fan with LED lightThe Beck modern ceiling fan with LED light has a simple design with clean finishes to freshen up your indoor spaces. Available in a variety of finishes, this large ceiling fan will complement your style from farmhouse bedrooms to modern home offices. Use the included pull chains to easily turn the light on and off as well as to adjust the fan speed. The Beck comes with our WhisperWind motor technology to deliver the powerful, efficient airflow you expect while maintaining whisper quiet performance.View Full Product Description