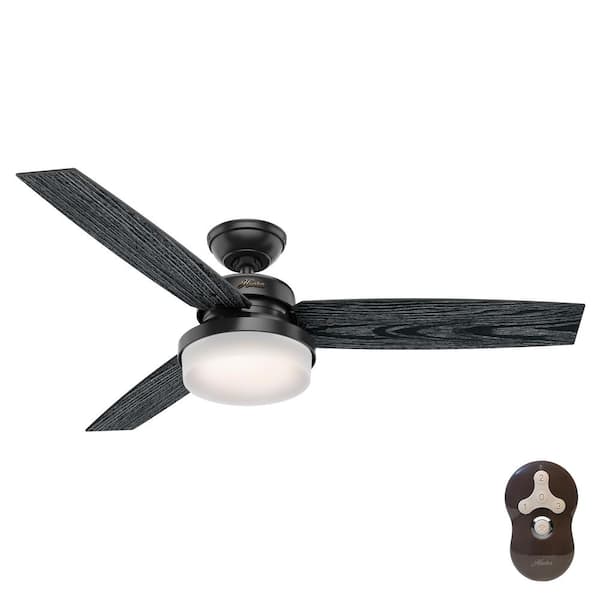 The Sentinel is a casual fan that fits seamlessly into any modern space. The simple, clean lines found throughout the design are paired with premium finish combinations to make for a delightful addition to your home decor. The 52 in. blades of this contemporary classic are powered by a reversible, 3-speed WhisperWind motor delivering ultra-powerful air movement with a whisper-quiet performance so you get the cooling power you want without the noise. This modern ceiling fan includes a handheld remote so you can adjust the dimmable, energy-efficient LED lights and 3 fan speeds.

22
Filter by:
Showing 1-10 of 210 reviews
Sep 23, 2021
Expectations Exceeded, Large Frosted Glass Light Fixture, NOT PLASTIC. Uses 2 regular bulbs (NOT LED) provides plenty of bright lighting. Fan is Well Made as is the Remote Control that mounts to the wall quite easily. 1 Con = reverse switch inside glass.
Very Well Made Fan With Excellent Features!
by
Jul 17, 2021
Looks great but wish I'd read these reviews on Hunter's website first
The Sentinel looks great as I purchased two in my large master bedroom. However, I failed to read the reviews on the Hunter website which sum up problems you will have with this product: https://www.hunterfan.com/products/ceiling-fans-sentinel-with-led-light-52-inch-fam718. Both fans make clicking sounds in the motor and frequently turns on/off. View the YouTube video at: https://youtu.be/qVyjMFynIck. These are all problems you will continue to see through these all there reviews. I purchased 5 Hunter Fans due to recommendations from the certified electricians that installed them but have already had to have two replaced... and that took some time through their customer service... not as easy as I'd expect from a brand that prides itself on its reputation ... and they don't pay for any installation costs... so unless you know exactly what your doing and don't want to hire a professional, this is not the company for you. I had to pay for installation costs again so I hope the new ones work... and now I'm going to need to go have these two replaced and not looking forward to the "insurance" issue resolution process again. Also, all these fans have only been installed for one month. I'm super disappointed because out of the five fans, four have had problems. That's 80%! I just hope this next issue resolution process isn't as close to as bad as the previous but I'm not hopeful.
by
Response from HunterJul 19, 2021
Hello, we are sorry to hear you are having an issue with your fans. We would love to help get this issue resolved. Please contact us at Customercare@hunterfan.com or 1-888-830-1326 for further assistance. ~Michelle

The Garland modern ceiling fan is a showstopper.The Garland modern ceiling fan is a showstopper. The jewel-inspired glass shade adds interest without being overwhelming, making it versatile in a variety of style spaces. Along with stunning design, the Garland's built with our SureSpeed Guarantee to deliver optimized, high-speed cooling worthy of a standing ovation.View Full Product Description

Taking cues from the early American IndustrialTaking cues from the early American Industrial Age, this fan is a unique blend of inspirational styles. The Piston gets its name from its likeness to machine pistons from old, large machinery. Clean lines and slick finishes combine with the mid-century blade design to provide a look that is undoubtedly modern and truly Casablanca, World's Finest Ceiling Fan. This damp-rated fan was built to withstand the elements making it a perfect fit for areas exposed to moisture and humidity. Constructed with stainless steel hardware, the Piston is a unique addition to your large sunroom, patio, or bathroom boasting an industrial interior design style.View Full Product Description