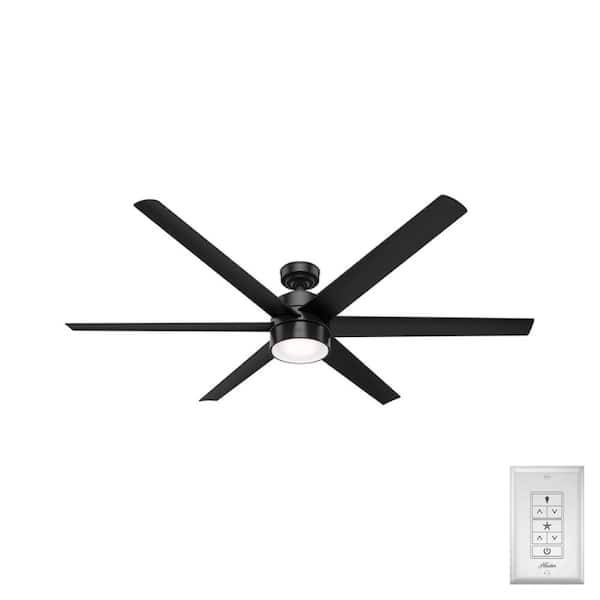 The Solaria outdoor ceiling fan features our exclusive SureSpeed Guarantee, providing unrivaled high-speed cooling. The pre-installed control receiver means simple wiring, and the included wall control is pre-paired and ready to use as soon as the fan is installed. This large ceiling fan is damp-rated for use in covered rooms exposed to moisture like porches, patios, garages, and bathrooms.

3
Filter by:
Showing 1-10 of 39 reviews
Dec 25, 2021
Pretty big fan
We recently purchased this fan for our new patio addition. It is beautiful, quiet, and very easy to install with a tall ladder.
by

Customer review from hunterfan.com
Aug 23, 2021
Great fan.
The fan works great! I was a little confused regarding whether the fan was a wireless remote controlled fan, but that was all my fault for speed reading the description, as it is plainly stated that it is not wireless.
by

Customer review from hunterfan.com
Jul 11, 2021
Multiple flaws make this fan unbearable.
Let’s get what is good out of the way first: this fan blows. It is quiet and moves a lot of air. It also looks great. The design, as you can see from the photos, is aesthetically beautiful. The install was easy and the fan feels really well constructed. Now let’s talk about its flaws. Before I tried to actually use the fan, I was very pleased. I’d have given top marks on install except that, due to how this fan is electrically designed, I ended up double, triple, and quadrupole checking my wall switches and voltages at the switch and at the junction box because I assumed I must have done something wrong. I did not. I’ve installed a lot of fans and this one really surprised me because it was purposefully designed to have unusual behavior. The fan takes about 5 seconds to start spinning from a dead stop and if you turn it off it won’t power back up until it gets close to stopped first- this makes it feel like the switch is broken. The light will not function if the fan is not powered. If you use the switch they give you this is somewhat less confusing, but barely. The instructions indicate you can use a two switch configuration, but it doesn’t function as you would expect. Power on the light with the fan off? Nope. Then flip the power for the fan on? Ok- fan is on, but light is still off. Why? Because the light switch is treated as a binary state by the fan. So, flipping the light switch just INVERTS the lights power state. This could be considered a feature because it means you can power the light on from the “remote”- more on this later - and power it back off from the switch and viceversa, but the same can’t be said for the fan. If you power the fan off from the controller then flip the power switch everything is turned completely off rendering remote function and light switch dead until fan power is restored. Ultimately this is extremely confusing and since the fan has a 5 second startup after getting power and the light won’t come on without the fan powered first, and the position of the light switch is now inconsistent, the controls are too confusing to be reasonable. The light is a spot light, so it’s REALLY not ideal for lighting up a room- it’s super bright directly under the fan, but way too dim beyond- both of the fans we had installed in this room before lit the entire room well and they were under $100. If you plan to use smart switches with this fan, pick a different fan. The unusual power controlled are not well suited to smart home comparability. The product photos show a remote- it doesn’t come with one. It has a remote built into the wall switch they give you which can technically be used without installing in the wall because it requires batteries to transmit the signal to the fan. (I’m unsure if you’re supposed to remove these if you install in the wall, but it appears you’re supposed to keep them in, which means you’ll have to kill the breaker to replace the batteries down the road). This isn’t something that makes sense to leave on a desk or in a drawer due to the wires and sharp metal bracket, but I suppose you could. The remote in the switch is designed to control on/off + speed/brightness. It also has a power toggle which can turn the entire fan and light off and on if installed in the wall as your master power switch. The power switch is a physical switch meaning if it’s off, you can’t just turn the power on for the fan or light, you have to push that master power button first (if installed in the wall). If you want to use existing switches things get even worse as described above. Overall, I would say this fan feels great and looks nice. But if you plan to interact with the controls and want friends, family, guests, and even yourself to not go insane, pick a different fan. I recommend looking for fans with pull chains to avoid this confusing control issue. I hope this saves someone the trouble I’ve had.
by
Response from HunterJul 12, 2021
Hello Mike, the start-up you are describing is normal for the DC motor this fan has. This fan is designed to be wired to the included wall control, not a dual on/off switch. The wires will allow the wall switch to turn the fan on/off. The battery powers wireless functions like dimming and fan speeds. If you need any assistance in the future, please reach out to us at 1-888-830-1326 or Customercare@hunterfan.com.~Stacy

Jun 7, 2021
That a big FAN!!!
[This review was collected as part of a promotion.] I love this fan. This sucker is big, and it can move some air! You can really feel the air draft from this thing while it ON and it super quite. Assembling/Installing fan was easy, but the wiring part was a bit confusing to me because I have a 2 switch setup (1 to turn ON/OFF Fan and 1 to turn ON/OFF Fan Light). In the manual, it clear tells you how to wire it at the fan junction box, but I couldn’t find clear instruction on how to wire it up at the switch junction box. It is because you have to wire up their included special design wall switch. Their single wall switch was design to do multiple things in a single switch. It can turn ON/OFF fan, increase/decrease fan speed, turn ON/OFF fan light, & also dim/brighten fan light. I took an educated guess on how it I thought it was supposed to be wired and I lucky enough to get it right. I force to disable / remove 1 switch from the 2-gang switch box, which made it look weird (Imaged attached). Not sure if you can even use it with a regular toggle wall switch but if you have a 1 switch setup, you are golden. One other thing I notice/dislike was that the include switch wall was not the same color white as the wall plate. Beside the issue with the included wall switch, it functions as expected and the fan itself is beautiful.
by

Customer review from hunterfan.com
May 27, 2021
Best fan ever
[This review was collected as part of a promotion.] I just finished installing the new solaria fan I just got and I am very very happy.i just replaced a existing fan in my bedroom which had the standard pull chains to change the fan speed and turn on and off the light because I just have one light switch for power to the fan. Not only does this new 72" fan push twice the air as my old one the features are great. It comes with it's own light switch which is easy to replace the old one.the new switch has Bluetooth controls which allows you to turn the fan on and off it also allows you to change up to 6 fan speeds and reverse , turn on and off the led light with 3 brightness settings without any rewiring.there are no pull chains on the fan to sway and make noise any more. This fan is the best I've ever owned and I know I have 4 ceiling fans in my house and two more outdoors in my gazebo.i plan to replace all of them now with this wonderful fan.
by

Customer review from hunterfan.com
May 26, 2021
Beast of a fan
[This review was collected as part of a promotion.] I had to hire an electrician to install fan as I had it installed outside. East to read instructions to put the fan together. Assembly went rather quick. Maybe 15 minutes. After the electrician got the hard stuff out of the way it went up like a dream. Came with a down rod for the fan to sit lower on an angled ceiling. It was perfect height for my particular application. Hunter thought of everything on this fan. It has an Led light with a dimming settings. The fan is also variable speeds. The 72 inch blade span is perwfor the area a chose to install it.
by

The Solaria outdoor ceiling fan featuresThe Solaria outdoor ceiling fan features our exclusive SureSpeed Guarantee, providing unrivaled high-speed cooling. The pre-installed control receiver means simple wiring, and the included wall control is pre-paired and ready to use as soon as the fan is installed. This large ceiling fan is damp-rated for use in covered rooms exposed to moisture like porches, patios, garages, and bathrooms.View Full Product Description

The Solaria outdoor ceiling fan featuresThe Solaria outdoor ceiling fan features our exclusive SureSpeed Guarantee, providing unrivaled high-speed cooling. The pre-installed control receiver means simple wiring, and the included wall control is pre-paired and ready to use as soon as the fan is installed. This large ceiling fan is damp-rated for use in covered rooms exposed to moisture like porches, patios, garages, and bathrooms.View Full Product Description

The Warrant indoor ceiling fan comes in 2-sizesThe Warrant indoor ceiling fan comes in 2-sizes - 60 in. and 70 in. - to efficiently cool open concept rooms while adding the finishing touch to farmhouse and modern industrial spaces. Available in various finishes, this large ceiling fan with LED light features 6 reversible blades that are reminiscent of a windmill with rivet hardware attaching the blades to the housing. The Warrant fan by Hunter features our new wall control with the receiver preinstalled for easy installation.View Full Product Description

The 72 in. blades of the Park View ceilingThe 72 in. blades of the Park View ceiling fan make it ideal for great rooms and open concept spaces. This damp-rated fan is made for user in covered outdoor and indoor spaces exposed to moisture and humidity like covered patios and bathrooms. Includes Hunter's WhisperWind motor for powerful air movement without the noise.View Full Product Description