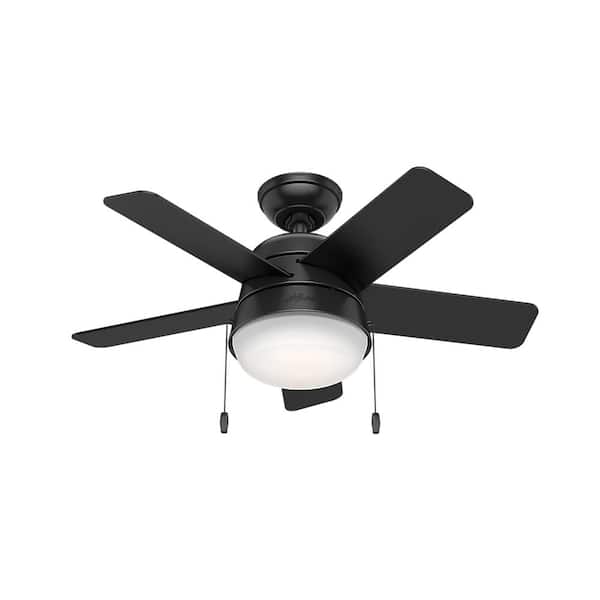 The Scandinavian style lighting complemented by a mid-century color palette along with the rounded edges throughout the Tarrant gives it a soft modern look. With a 36 in. blade span, this petite fan is perfect for small spaces like home offices, hallways and even bathrooms. But don't let its size fool you: This modern ceiling fan packs a punch when it comes to airflow and keeping you cool.

Hi what is the high from the blades to the ceiling ?

Hello, the height from the ceiling to the blades is 10.07 inches. ~Stacy

How loud, noisy is the motor? Bought a fan recently where the fan speed and blades didn't bother...

Ours is very quiet

What is the temperature color of the light (in Kelvin)?

Hello, the color temperature would be a warm color-yellowish on the Kelvin scale. ~Stacy

I need a white/nickel/silver/stainless steel (preferably white) 36" with TWO bulbs, but they ALL ...

This fan should fit all of your requirements. It is 36", white, and has 2 bulbs.....standard base. That is the base most light fixtures and most lamps use, by far.

Does the fan come with a remote receiver? Or do I have to buy the receiver and the remote separat...

Hello, this fan does not come with a remote. You would need to purchase one separately.~Stacy

Hello, you will need to buy a remote/receiver bundle. ~Stacy

Would this fan work with 8' ceilings, does it come in white and is it compatible with either a wa...

I think it could work with 8’ ceilings. Ours is about that I would guess and it works great. It doesn’t hang low off the ceiling which is nice! It’s small but mighty.

How do I switch the direction for summer? I can't find a switch for that.

Hello, the reverse switch is found on the light kit. You will need to remove the glass globe to find it.~Stacy

9
Filter by:
Showing 1-10 of 285 reviews
Jan 18, 2021
Looks good, very good value. Installation was nasty, fit and finish not great. Serious design flaw.
Short version: Good: The fan looks really sharp. The price is great. The bulbs are replaceable, which means you can get the brightness and color that you want. Not good: Instructions are pretty bad. Build quality is not great. The light kit installation is AWFUL. The bulbs that come with the light are pretty terrible. They cut A LOT of corners to get to this price point. The long version: I've put in a bunch of ceiling fans and this looked straightforward. If this is your first install, you'll want to watch some YouTube videos, because some of the instructions are poorly worded. IMPORTANT TIP: Do NOT overtighten the screws attaching the bracket to the box. If you do, you will compress the rubber bumpers, which will cause the canopy screw holes to be too close to the ceiling, and you won't be able to install the canopy until you loosen the bracket. Blade installation was a pain. You're trying to put in fifteen screws upside down while holding the fan blades in place. Hunter Fan, if you're listening? Use Allen screws instead. A Phillips screw will fall off the screwdriver if you look at it wrong, but an Allen screw won't. The light kit is where the problems started. Here's the major design flaw: The idea is to slide holes in the light kit onto two screws in the fan motor housing, then twist slightly to hold it in place while you tighten things up. The problem is that the holes in the light kit are inside the light kit switch box, mostly obscured by a tangle of wires (see pic. Green arrow points to a tiny hole that you're supposed to get a screw into. While it's upside down. This has come up in other reviews; the one I saw had a response from Hunter saying "sounds like you have a defective unit!". It's not. The design is awful. You have to hold the light kit up to the fan, then align two tiny screws with two almost invisible holes that are obscured by wires. Once you have the light kit on, you twist gently, then, praying you don't accidentally knock it down and have to start over, you put the third screw onto your screwdriver. You then have to slide the screw, balanced on your screwdriver, through a maze of wires into a tiny hole. Then, WITHOUT DROPPING THE SCREW, carefully wiggle the light kit so that the hole in the light kit is aligned with the hole in the fan motor. Oh, and if you cross-thread the third screw, you're pretty much out of options and probably will need a new fan. (Using two screws is a Bad Idea, the lightshade is heavy glass)If you do buy this fan, budget at least an hour for installing the light kit. I would happily have paid another $20 for this fan if the light kit had been a five minute install. So once I turned it on and fired it up: The lights that come with the fan are 9w 800 lumen LED bulbs with a 3000K color temperature. These are probably okay for a living room or a bedroom where you want soft and warm light. I have this fan in a home office and I want something bright to work by. The office is about 11' x 11'. Two 14w 1500 lumen 5k LEDs light up the room pretty well; once the sun goes down I do need additional light at my desk. I think the two bulbs were an additional $8 or so, which isn't much, but it's 10% of the price of the fan, so just figure on spending that. You'll spend more if you want dimmable. The other issue I had once I turned it on: The part of the motor assembly that moves - the part with the blades attached - is out of round. By which I mean that if you watch the edge of it against the light kit or the top of the motor housing, it goes in and out by around 0.25". It's not a huge problem, but it did concern me that something was terribly installed. Nope, just bad quality control. Finally: In some of the reviews where people express concerns, Hunter Fan says "Hey, please contact our customer service! We'd love to chat!" I did. I emailed them 13 days ago. Never heard back. So that's ... not great.
by NorthernTwinDad
Response from HunterJan 20, 2021
Hello, thank you for your feedback. Our engineers will definitely want to hear about your experience. We will let them know. If you need any further help please reach out to us at 1-888-830-1326 or Customercare@hunterfan.com. ~Stacy

The Scandinavian style lighting complementedThe Scandinavian style lighting complemented by a mid-century color palette along with the rounded edges throughout the Tarrant gives it a soft modern look. With a 36 in. blade span, this petite fan is perfect for small spaces like home offices, hallways and even bathrooms. But don't let its size fool you: This modern ceiling fan packs a punch when it comes to airflow and keeping you cool.See Full Product Description

Brighten up small rooms with the Loki ceilingBrighten up small rooms with the Loki ceiling fan. Available in 3 finishes with reversible blade finishes, you can customize the look of this small ceiling fan in your guest bedrooms, home offices, nurseries and keeping rooms. The included pull chains make it easy to control the LED light and the 3 fan speeds. Featuring the WhisperWind motor, you’ll get the cooling power you need with whisper-quiet performance you expect.See Full Product Description

Don't let its small blade span fool you,Don't let its small blade span fool you, the 34 in. Watson ceiling fan in New Bronze packs a punch. It combines a powerful WhisperWind motor with an updated classic design, making it the perfect choice for small spaces. The Watson will work beautifully in today's homes and can save up to 47% on cooling costs.See Full Product Description