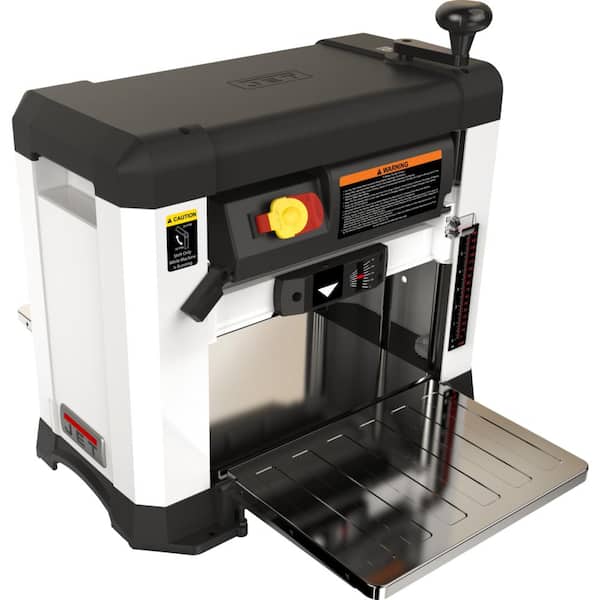 The Jet 13 Benchtop planer delivers the power and efficiency that woodworkers demand in the shop. The Jet 13 in. Planer produces a smooth and consistent cut surface thanks to its Helical Style Cutter head. The Helical Style Cutter head has 6 rows of 24 individual quick change inserts which can be easily rotated or replaced if damaged or worn. This segmented cutter head design helps reduce noise as its 2HP motor is turning at an impressive 10,000 RPM. The 13 Benchtop planer include a rugged 4 post design, adjustable folding tables, 2 infeed speeds and a sturdy Cast Iron base which helps reduce snipe.

3
Filter by:
Showing 1-10 of 19 reviews
Jun 13, 2020
The best benchtop planer on the market, hands down
I work a lot of figured exotic woods and can honestly say the cut quality is superb. With my old DeWalt benchtop planer that is in the same price range you can't run something like curly maple to go through without some chipout but the heliccal head runs it all with no chiping out and so smooth that I actually have to sand surfaces with 320 to dye them as the finish the planer makes is to smooth for any color to soak into the grain.
by
Response from Digital Marketing TeamJun 17, 2020
What a review! Thank you so much for this comparison to the DeWalt benchtop. We had so many people asking us to produce a benchtop planer we're glad that we hit it out of the park here. We agree the helical head cutters make a world of difference in the finished result. Can't wait to see some of your end products!

RIDGID introduces the R4331 13 in. ThicknessRIDGID introduces the R4331 13 in. Thickness Planer. Unlike other benchtop tools, the RIDGID 13 in. Thickness Planer is eligible for the Industrys Best Lifetime Service Agreement. Simply register this tool within 90 days of purchase and receive FREE Parts, FREE Service, FOR LIFE. This planer features a powerful 15 Amp motor and delivers 9,000 RPM. Built with precision in mind, the 13 in. Thickness Corded Planer has 8 adjustable cutting stops at common depths. Equipped with a 3-blade cutter head and quick-changing, dual-edge cutting blades, users will get a smooth finish with each pass. The advanced chip and dust removal system uses integrated fans to clear the work area of sawdust and helps prevent motor clogs. This thickness planer also features large table extensions for added support, and the SURE-CUT Carriage Lock to minimize snipe at the end of each workpiece. The R4331 includes the 13 in. Thickness Planer, Depth Adjustment Handle, Dust Port, Magnetic Blade Wrench, Switch Key, and Operators Manual.View Full Product Description