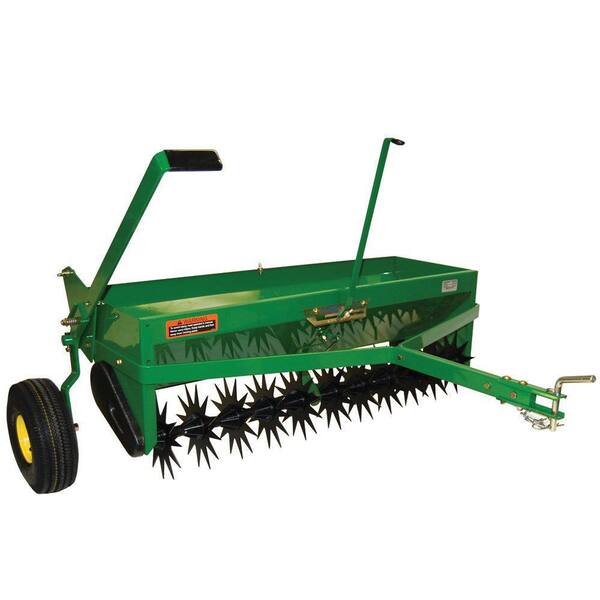 Finish two big lawn projects at once with John Deere's 40 in. Tow-Behind Aerator-Spreader. This time-saving tool not only aerates the soil, allowing water, oxygen and nutrients to reach grass roots, but also drops seed, fertilizer and lime directly into the perforated soil. The durable steel spreader hopper supports up to 100 lbs. of material and features calibrated flow control with adjustable stop features. The aerator's 8 in. diameter powder-coated steel tine stars resist rust and perforate the soil up to 2 in. Multitasking has never been easier!

May 15, 2021
Best aerator/ spreader out there.
Product arrived in 7 days. Delivery was to my front door. No scratches or mars on the carton or contents. Assembly was a breeze. No missing parts. 100% satisfied with my purchase... Highly recommend !
by
Apr 26, 2021
Overall Good Product - Needs Improved Instructions and Slight Design Changes
As the title says, it's overall a good product just needs a few modifications. I bought one of these a few weeks ago and have already run it over about 5 acres between my yard and a couple of friends yards. Here's what I love about it: All steel constructions (except tine spacers and chain guard), pneumatic tires, heavy. What I don't like, the middle support for the tine shaft is very thin/flimsy metal; already have had two of the spacers on the tines wear pretty heavily due to rubbing as parts shifted during use. Luckily, I'm pretty handy and have been able to make some minor modifications/add in some washers to make this better. Honestly, it's a good product and the only reasons I didn't give it 5 stars were: -Poor assembly instructions. I don't know how the average homeowner could complete this on their own, let alone using the instructions. In order to assemble and attach the drawbar, I ended up finding it FAR easier to attach the drawbar to the box FIRST and then use a C-clamp to bring it together in the middle for the final bolts. Additionally, the instructions could've been a little more clearly matched to the images in the instructions. The pictures on instructions were clearly made with an older revision of the product than the one I had. -Heavier metal for the box/supports of the tine shaft. I've had some minor flexing/bending where the tine shaft goes through the box for support which has caused some of the plastic spacers to prematurely wear. I, fortunately, have some spare ag parts laying around in the shed and can modify this slightly to be more durable with a little time and effort. -More washers. There are several spots on this that having a large fender washer between the bolt head and the the metal the bolt is going through are beneficial; again, going back to surprising spots of wear on the implement due to odd design choices. -placement of one of the studs for the raise/lower arm; in the picture of the product the forward most "stud" for the lever interferes with attachment due to it running into the side of the spreader box; you can work around this by only loosely attaching the bolt/stud and then later tightening it when completing assembly. -Raise/lower level placement; while not a "big deal" because only 2 of the tines are connected to the shaft to run the agitator (meaning you can run with the thing down even when turning) it would be nice to be able to raise/lower the implement from the seat of my mower. Again; while I had a lot of "negative" feedback; it was only small nitpicky things that (for most people) I don't think would be a big problem (accept assembly). I noticed most of this stuff simply because of how much I used it on the first day I had it. If I had to make the decision again, I would still buy this product, but for those whom have not yet purchased it and are thinking about it; beware that assembly can be difficult; that aside, solid product.
by
Apr 21, 2021
by
Apr 10, 2021
Run away!
This is THE biggest waste of money in my entire life. The drive chain pops off and has no adjustments or metal idler, the driveline is plastic that breaks and strips. It is a promising concept that was obviously cheaper out on to cut costs in essential areas. Completely disappointed this POC is branded with the John Deere name.
by
Response from BrinlyCustomerServiceMay 7, 2021
We are sorry that you had trouble with your AS-400JD Aerator Spreader. Please reach out to us directly so that we can discuss the issues you have experienced. You can reach us the following ways, you can call us at 877-728-8224, email us at customerservice@brinly.com or live chat with us on www.brinly.com.